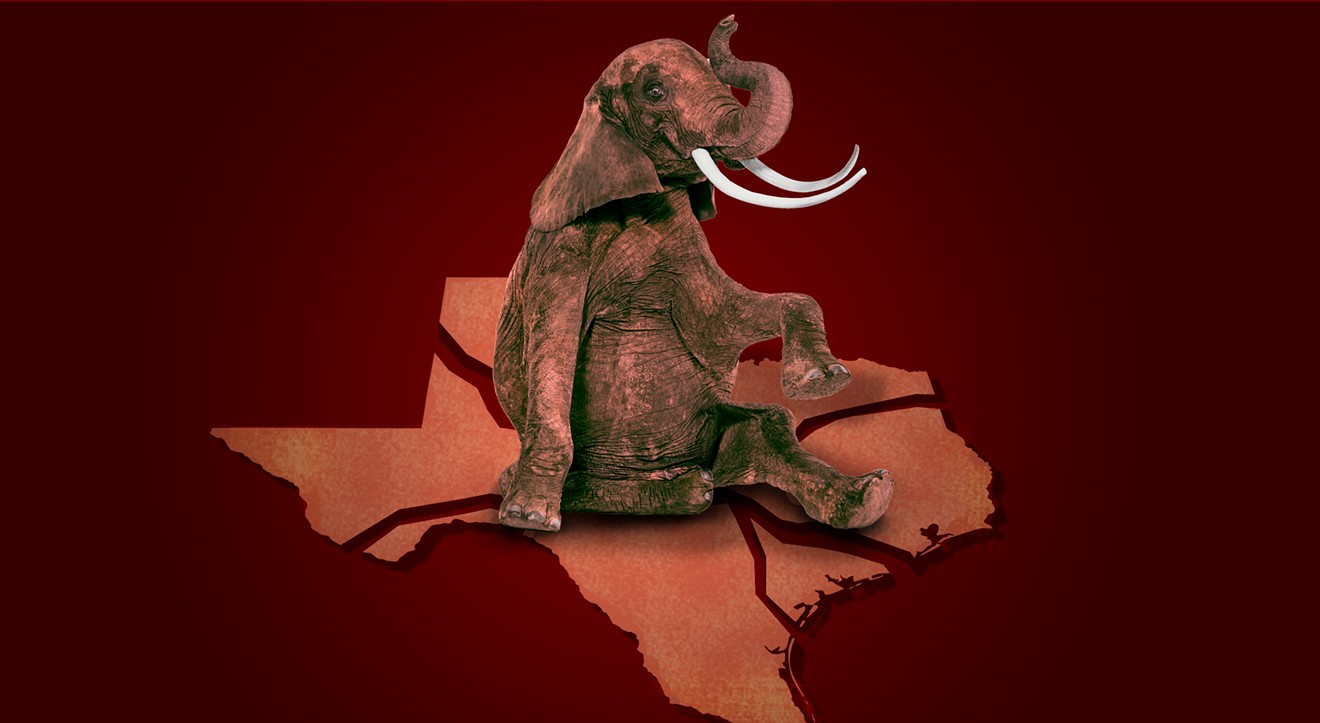 Republicans are crushing Texas with their conservative agenda. illustration by Sarah Schumacher
Texas Republicans are in the national spotlight again, making headlines for the party’s uber-conservative platform considered at the GOP convention last weekend. Liberals, of course, were horrified by the items, but even some Republicans seemed shook by convention attendees' rampant homophobia, veteran derision and flirtations with secession.

Former Ohio Gov. John Kasich didn’t mince words when discussing the convention. “What happened in Texas was a clown show, and I think even clowns were embarrassed by what they saw down there,” the Republican said Monday on CNN.

Mark Jones, a political science professor at Rice University, told the Observer that the state GOP’s platform is essentially a “symbolic wish list” for the party’s most devoted and die-hard activists. But once planks are adopted and priorities are created, he said, Republican lawmakers will face pressure to push forward that agenda during the 2023 legislative session.

Not all of the priorities will be converted into law, Jones added, but at least a few of them likely will.

The latest convention is a continuation of a shift toward the right that’s been unfolding for at least two decades, said Cal Jillson, a political science professor at Southern Methodist University. It's made up of a base of roughly 5,000 “true believers” who gin each other up whenever they congregate.

Jillson notes that he’s been talking about GOP platforms for a quarter-century. “Each time there are the old tried-and-true standards, and then there are the next steps toward the cliff, which are variations on issues of God, guns and gays,” he said. “That’s true again this year, but I think it’s a relatively steady march to the right.”
Here are 20 of the GOP’s most out-there items on this year's wish list.

1. Secession
Even though the state has trouble keeping the power on, the Texas GOP is eyeing independence. They believe we retain “the right to secede from the United States, and the Texas Legislature should be called upon to pass a referendum consistent thereto.”

2. Prayer in schools
Forget separation of church and state, y’all. Republicans want to see the Bible, prayer and the Ten Commandments back in the courthouse, classroom and other government buildings.

4. Ban sex education in schools...
Texas’ GOP wants lawmakers to prohibit sex education from all public schools, plus anything about "sexual health, or sexual choice or identity.”

8. Teach that there are only two genders
According to the state’s GOP, only biological males and biological females are legitimate. They say there aren’t any other genders.

9. Abolish tenure
Lt. Gov. Dan Patrick has previously slammed tenure, saying new professors and those who teach critical race theory shouldn’t receive it. But the state’s GOP is taking it a step further, insisting that the entire tenure system should be replaced with one that’s merit-based.

11. Being gay is an “abnormal lifestyle choice”
To the state’s Republicans, people "choose" to be gay, and that's “abnormal.” They’re also against gay marriage, even if the couple married outside Texas. Happy Pride!

13. Repeal all hate crimes laws
Hate crime laws should be repealed because they’re unnecessary, the Texas GOP says. They argue that there are already plenty of other laws covering crimes against “other persons” on the books.

14. Heritage must be preserved
The Alamo must never be “reimagined,” Republicans say. All Confederate monuments should also stay put, and those that have already been relocated need to be returned.

16. Repeal Voting Rights Act of 1965
Texas Republicans claim they support suffrage for all U.S. citizens old enough to vote. But they’re pushing for an end to the Voting Rights Act, which was passed to combat discrimination against African American voters.

17. Recreational marijuana shouldn’t be legalized.
Neither should casino gambling.

18. Conquer terrorism
“Radical Islamic terrorists” are still a threat, as far as Texas Republicans are concerned. They're pushing for the Muslim Brotherhood to be classified as a foreign terrorist group and for government agencies to cut ties with organizations like the Council on American-Islamic Relations (CAIR).

20. The 2020 presidential election was "illegitimate"
Delegates also passed a resolution on a consistently debunked notion that falsely claims the 2020 presidential election was rigged. “We reject the certified results of the 2020 Presidential election, and we hold that acting President Joseph Robinette Biden Jr. was not legitimately elected by the people of the United States,” it reads.
KEEP THE DALLAS OBSERVER FREE... Since we started the Dallas Observer, it has been defined as the free, independent voice of Dallas, and we'd like to keep it that way. With local media under siege, it's more important than ever for us to rally support behind funding our local journalism. You can help by participating in our "I Support" program, allowing us to keep offering readers access to our incisive coverage of local news, food and culture with no paywalls.
Make a one-time donation today for as little as $1.