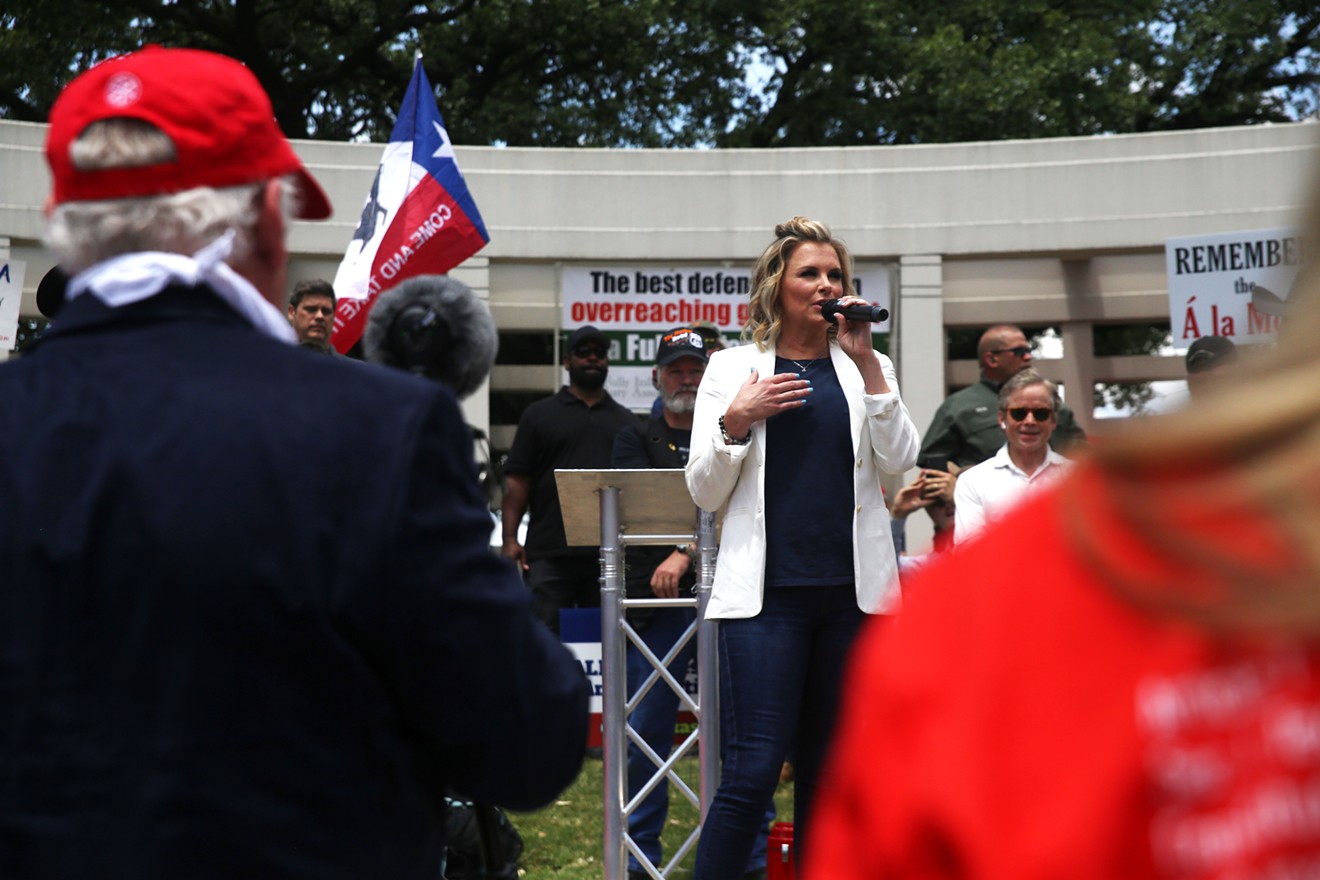 That's soon-to-be-state Sen. Shelley Luther to you. Jacob Vaughn
Shelley Luther wants less government and more freedom. The Dallas hair salon owner recently announced her candidacy for the Texas Senate, and if elected, she said she’ll fight against what she sees as government overreach.

The decision to run was an easy one, Luther told the Observer.

“When the Senate District 30 opened up, it just happened to be exactly where I lived in Pilot Point,” she said. “So I thought that, you know, it’s kind of a sign from God saying that, ‘This is something that I want you to do.’”

Luther sparked controversy earlier this year when she defied Gov. Greg Abbott’s order closing her business and countless others to slow the spread of COVID-19. Since then, she’s appeared on Fox News and The View and even sang a duet with rock performer and conservative activist Ted Nugent.

Even President Donald Trump has seemed to take a liking to Luther, calling her “an incredible representative” for people who want to get back to work.

Momentum is essential for any political contender’s candidacy, and Luther’s got it. She’s been a regular guest on Fox News, which has an older viewership, and she’s also done well at reaching younger audiences.

Political youth organization the Young Americans for Liberty has featured Luther on its podcast, and conservative radio show host Dan Bongino encouraged his 2.3 million Twitter followers to support her candidacy.

And then there was #PelosiGate.

Last week, U.S. House Speaker Nancy Pelosi was filmed in a San Francisco hair salon while not wearing a mask. Since then, Luther has appeared as a guest on Fox News to call Pelosi out, which has undoubtedly helped to augment her name recognition.

“I guess I have to thank Nancy Pelosi for being a ding-dong and going into a salon without a mask, and then telling everybody else that they’re idiots for not wearing masks,” Luther told the Observer.

“The hypocrisy is real, I’ll just say,” she continued. “Telling everybody else what to do and then doing the opposite, it’s pretty sickening to me.”

Luther has also lambasted the Texas governor for his handling of the coronavirus pandemic. She said Abbott abused his power by issuing a mask mandate, which she views as an infringement on people’s constitutional rights.

In a recent Fox interview, Luther said the governor needs to discuss future coronavirus tactics with state lawmakers and “not just be a king or we’ll turn into a communist state.”

The governor’s shutdown has devastated the economy, Luther said, as well as business owners and their families. She added that her heart goes out to the state’s bar owners, who were forced to close because of another Abbott-issued mandate.

When it comes to the coronavirus pandemic, politicians should take a much more laissez-faire legislative approach, she said.

“I think [the government] should do nothing,” Luther said. “I think it boils down to personal responsibility, and if people have underlying conditions, then they are responsible for themselves, to take care of themselves.”

If elected, Luther said she’d cut back government spending and eliminate property taxes. She argues that it’s ridiculous that people who have already settled their mortgage could still lose their home if they miss a property tax payment.

Luther also said she’d work to uphold Texans’ right to bear arms. Texas Gun Rights, which is the “largest ‘No Compromise’ gun rights group,” according to its website, endorsed her candidacy on Thursday.

In addition to being a hair salon owner, Luther said she’s a retired schoolteacher who taught Spanish for 13 years. If elected, she said she would work to get rid of state-mandated testing for students, such as the STAAR test.

Although this is her first time running, Luther said she’s ready to take on her opponents. State Rep. Drew Springer is in the running, as is outgoing Denton Mayor Chris Watts.

Instead of seeing her inexperience as a drawback, though, Luther said it’s exactly what makes her the best candidate. Her greatest asset is the fact that she’s “just like everybody else,” she said.

Luther also expressed admiration for Trump, who himself was a political outsider before winning the presidency.

“I like that he’s not a politician and he is not motivated by money. He gives his paycheck away,” Luther said. “So he’s not going to be persuaded by lobbyists and people that want to give money to make certain decisions. That’s how I feel like I want to run, and if I’m a senator, that’s how I will be.”
KEEP THE DALLAS OBSERVER FREE... Since we started the Dallas Observer, it has been defined as the free, independent voice of Dallas, and we'd like to keep it that way. With local media under siege, it's more important than ever for us to rally support behind funding our local journalism. You can help by participating in our "I Support" program, allowing us to keep offering readers access to our incisive coverage of local news, food and culture with no paywalls.
Make a one-time donation today for as little as $1.