Shortage of Working Vehicles Could Spread Dallas Fire-Rescue Even Thinner 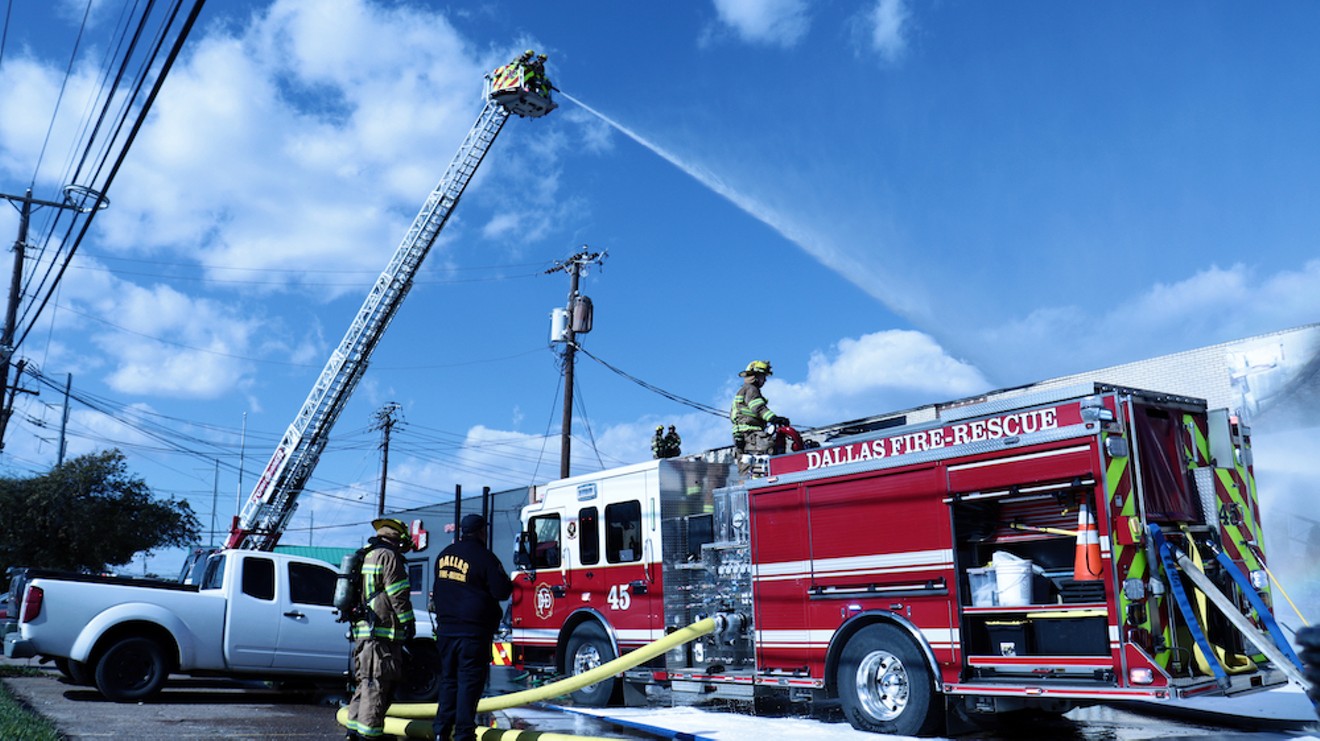 Dallas Fire-Rescue expects that two more of its frontline trucks will be operational again in a couple of weeks. Kurtz Frausun, owner of Studio | Frausun: www.kurtzfrausun.com
Nine of Dallas Fire-Rescue’s 23 frontline fire trucks have mechanical issues and are out of service. All of the department's backup trucks are in use, leaving it two short of being fully operational.

It could take two weeks to bring the trucks back into service, which is why the city is working on an emergency rental agreement to cover the shortage, DFR Chief Dominique Artis said in a Sept. 16 memo. These rented trucks could hit Dallas streets as early as this week.

“While a shortage of available apparatus can represent a significant challenge to DFR, this is a temporary situation that we can and will manage,” Artis wrote. “DFR normally enjoys a robust fleet of 23 frontline and seven reserve trucks with the ability to deliver excellent service to the citizens of Dallas.”

But it was just in July that one of DFR’s vehicles broke down as firefighters were on their way to take out a grassfire on Old Hickory Trail in southern Dallas. This vehicle was meant to replace another that had broken down at the scene of the fire. These were special trucks used specifically for putting out grass fires. The firefighters ended up having to use equipment from neighboring cities to put out the flames.

Jim McDade, president of the Dallas Fire Fighters Association, told the Observer that DFR’s repair shop wasn’t adequately staffed, which has led to delays bringing vehicles back in service. “That’s why we have no reserve apparatus right now,” McDade said.

McDade said the current shortage stems from poor maintenance over the years. “And ‘robust’ is so far from the truth,” he said, referring to Chief Artis’ description of the fleet. A more accurate word, McDade said, would be “dismal.”

Jason Evans, a DFR spokesperson, told the Observer in an emailed statement Monday: “While the staffing in our Maintenance Division is holding steady, we are looking to add more personnel. In the meantime we are exploring ways, through the addressing of preventative maintenance, to help relieve the stress and strain that comes with working on a fleet which has the volume and variety of apparatus DFR utilizes.”

Unlike the two broken-down vehicles a couple of months ago, McDade said the current shortage will have an impact on day-to-day operations. “Any apparatus out of service slows our response,” McDade said. “Two trucks is significant. That’s almost 10% of our fleet.”

In his memo, DFR Chief Artis said the department’s dispatch center uses software “to manage gaps in coverage in real time by shifting resources to areas of need." He added, “While normally this system is used in reaction to periods of high call volume, it also aids in mitigating response delays due to apparatus shortages.”

McDade said the shortage could translate into more calls for specific fire stations and spread department resources even thinner.
KEEP THE DALLAS OBSERVER FREE... Since we started the Dallas Observer, it has been defined as the free, independent voice of Dallas, and we'd like to keep it that way. With local media under siege, it's more important than ever for us to rally support behind funding our local journalism. You can help by participating in our "I Support" program, allowing us to keep offering readers access to our incisive coverage of local news, food and culture with no paywalls.
Make a one-time donation today for as little as $1.