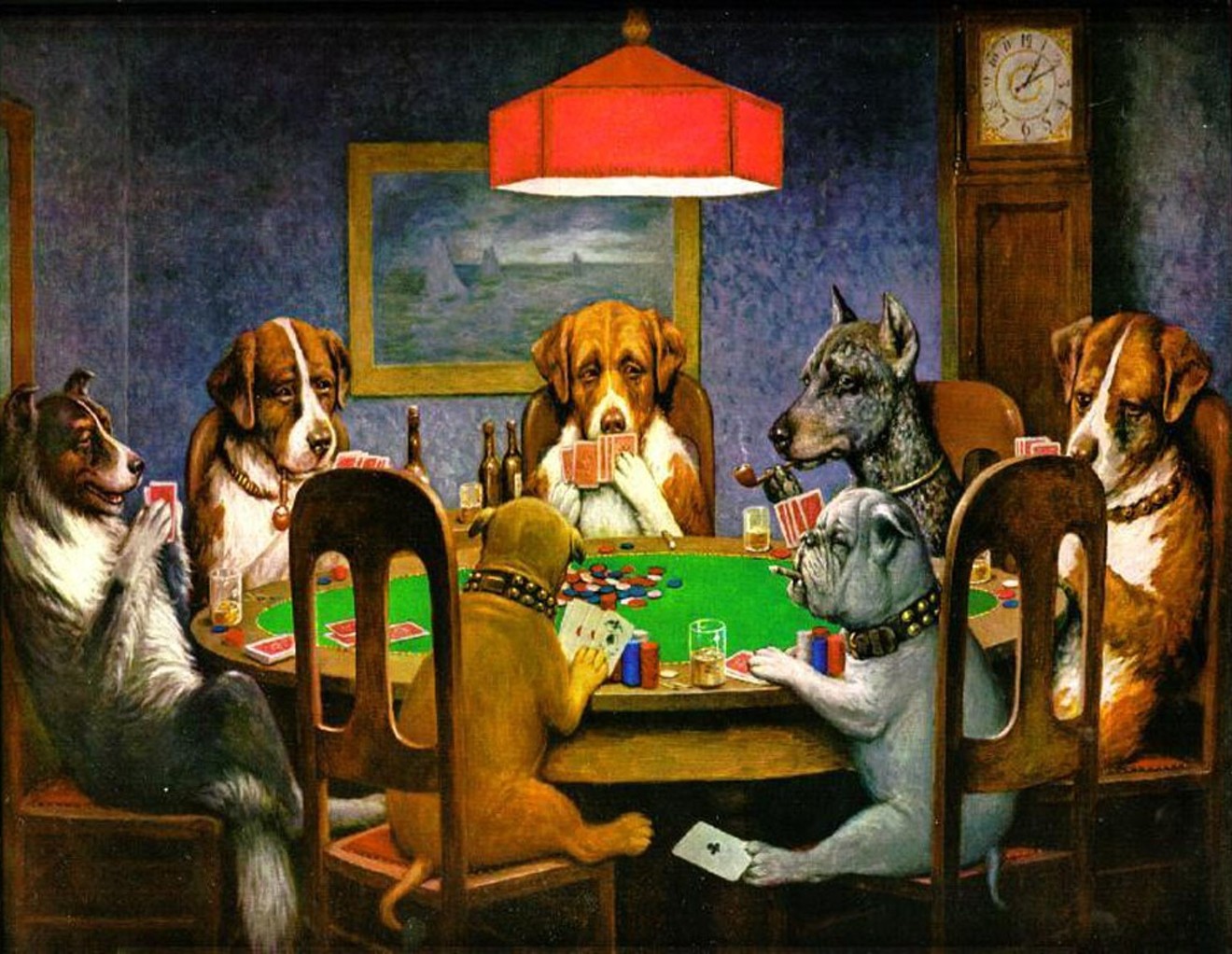 Dallas is going after its poker clubs. But a bill filed early in the upcoming Texas legislative session could let counties decide the fate of commercial poker. Cassius Marcellus Coolidge/Wikipedia Commons
State Rep. Gene Wu, a Democrat from Houston, filed a bill earlier this month with language that could force many poker rooms shut down across the state. But Wu said a filing error led to a portion of the bill being left out. This portion of the bill would essentially toss the legality of poker rooms into the hands of county officials.

The bill Wu filed on Nov. 16, House Bill 732, clarified a gray area in the Texas penal code that commercial poker rooms have relied on to stay in business. The code provides a defense against prosecution for gambling as long as it’s happening in a private place, everyone has a fair chance of winning and the house doesn’t take a portion of the bets.

Some poker clubs, like Texas Card House in Dallas, have opted to charge membership fees like a private club and sell concessions. Everyone has an equal chance of winning and all of the bets go back to the players. Wu’s bill would have changed the code to provide the defense against prosecution in private residences instead of private places in general.

With more than 60 poker rooms in Texas, including three in Dallas, this would surely cause issues across the state, but Wu said there’s more to his bill that could soften the blow.

Wu told the Observer during a phone call Monday that the draft of his bill was meant to include a few more lines that said commercial poker rooms could be allowed only if they were licensed and regulated by the counties they’re in. A new version of the bill has not been filed yet.

“You might be a criminal depending on which county you’re in." – Rep. Gene Wu

Wu said there’s too much of a gray area in the law and it could hurt the players, the businesses and the surrounding communities alike. The way the laws are written now, there’s essentially no regulation of these businesses, Wu said, and the gray area makes it hard to take action against bad actors. From the players' perspective, the ambiguity in the law and the way different municipalities handle poker rooms make for an environment where they’re a criminal in one county or city and a legal player in the next.

“You might be a criminal depending on which county you’re in,” Wu said. “Even in a county like Harris County with like 28 police jurisdictions, you might be violating the law based on which municipal boundary you’re inside.

“So we’re trying to provide some protection for people, especially if they’re going to play at home. … But if you are doing it in a commercial setting there should be some clarity about what operations are proper and which ones are not.”

And he thinks the county officials may be the right ones to make this call. “If a business is in a county and the county just says ‘All we want to do is take your picture, give you a license and charge you $10’ so be it,” Wu said. “But I think the important part of that is if there’s a way for counties to say ‘No. You guys are consistent bad operators. You’re a consistent bad actor. We’ve had so many complaints. We’ve had so many drug busts and so many prostitution busts at your operation. We need some way of shutting you down.’ And right now, there’s basically no way of shutting them down.”

He said if a gambling operation doesn't have a TABC alcohol license or serve food, there’s no license to take away and put bad actors out of business.

Wu doesn’t think there’s enough political support in the Legislature to roll out state regulations on poker rooms, which he said he supports. To him, the next best thing is to leave the decision to the counties. “For the state to put in the regulations, I think is a problem,” he said. “Creating a legal structure where we just tell counties ‘Hey, if you want to do this, if you guys want to have these operations, you figure out the regulatory pathway’ is a smarter political way to go.”

If a county wants to take a hard stance against commercial poker rooms, officials could simply decide not to regulate them. There might be room for conversations about grandfathering in poker rooms that are already open, Wu said. But he said people may also have to live with the fact that some counties may never want to allow commercial poker rooms. “You know, there are counties in Texas that are dry,” Wu said. “They don’t serve alcohol at all. If that’s the pathway they want to go down, that’s the pathway they want to go down.”

Dallas poker rooms have mostly seen challenges from the city of Dallas, instead of the county. For example, the city is tangled up in a lawsuit with Texas Card House over the issuance of the poker room’s certificate of occupancy. The city claims the certificates should have never been issued, arguing that the defense to prosecution against gambling was only supposed to apply to places like private residences (an argument that Wu’s bill would solidify).

If Wu’s bill is passed as he claims it was meant to be filed, he said residents and city officials could then advocate at the county level for how they want poker rooms to be handled. He thinks Dallas officials and residents would choose a path forward that would allow commercial poker rooms to stay.

“Does the city of Dallas have some generalized angst and dislike of poker in general?” Wu said. “I don’t think they do. I think their lawsuits and their attack is based on the fact that they have run out of options to deal with them.”

Wu said his bill could give the city more options on how to deal with its poker clubs.

Dallas City Council member Cara Mendelsohn hasn’t read Wu’s bill yet. She has, however, said she doesn’t recognize the gray area poker clubs say allows them to operate. Her stance has been that if Texans want to be able to legally gamble, they should take it up with the state.

“I have said from the start that if people want gambling legalized, they need to go to Austin and make it happen,” Mendelsohn said. “If it becomes legal, I hope Dallas will be ready with proper zoning restrictions so no poker rooms or gambling facilities are adjacent to residences.”
KEEP THE DALLAS OBSERVER FREE... Since we started the Dallas Observer, it has been defined as the free, independent voice of Dallas, and we'd like to keep it that way. With local media under siege, it's more important than ever for us to rally support behind funding our local journalism. You can help by participating in our "I Support" program, allowing us to keep offering readers access to our incisive coverage of local news, food and culture with no paywalls.
Make a one-time donation today for as little as $1.