The house money has jumped the line. Big houses in some neighborhoods that still scared the socks off middle class homebuyers 10 years ago are selling in the quarter- to half-million-dollar range.


South Dallas is people, people who put down roots and hung on through harder times than most Americans can even imagine.

The big money is massing. Jack Matthews has bought up so much land south of Interstate 30 between the Trinity River and I-45 we should rename the whole area Jacktown.

Development is steadily nosing north from Duncanville, DeSoto and Hutchins.

Maybe the Redbird Mall redevelopment is real. Maybe the old southern Dallas leadership, state Sen. Royce West and City Council member Tennell Atkins in particular, will take their boots off the neck of the UNT-Dallas area and finally allow it to bloom.

But there is a more specific project in the wind that we need to look at if we want to get a hint what lies ahead for South Dallas, and, by the way, when I use that term, South Dallas, I’m not talking about land. I mean people.

South Dallas is people. It’s people who have put down roots and hung on through harder times than most Americans can even imagine, whatever it took. Whatever kind of rugged stick-to-it-iveness and sheer entrepreneurial zeal it took to establish a stable, million-dollar-a-year business in North Dallas, that’s what it took to establish a stable, $75,000-a-year tire repair shop in South Dallas.

Those people are there. They have roots. They bought that land with sweat, blood, courage and stubbornness. And they know the lay of the land. If the journey has anything to do with preserving and enhancing the community already there, then the people who own it now are the best guides. That’s what we need to look for. Will they be the guides? Whatever is coming, whatever the new big thing may be, will it be accomplished through the will and energy of the existing community? Or has somebody got a D-Day invasion in mind?

The specific project I’m thinking about is the proposed bullet train between Houston and Dallas. The Houston Chronicle has reported that construction could begin by the end of this year.

As the bullet train has emerged as a real deal, the major landholders at the southwest corner of downtown including Matthews have shown understandable interest in landing the Dallas terminus on their turf. In fact, as details have come into less foggy view, it has become clear that the bullet train will be a land deal, not a transportation deal.

The ridership projections on which Texas Central Partners is basing its public financial calculations for the bullet train feel highly aspirational. The company says its high-speed rail line will carry 6 million passengers a year by 2029 and 13 million by 2050. But on Amtrak’s well-established high-speed Acela Express in the Northeast, ridership has hovered well below 4 million for a period of years.

Acela runs through the dense rail-centric corridor between Washington, D.C., and Boston, where real people have real jobs and live in real homes but don’t even have their own real cars. I know, crazy. Hard to figure.

Up there, people are so rail-ified, they get to one rail line by riding on another one. Here, they’ll need a separate rail line just to get across the parking lots.

That’s not to say it can’t happen here. It will. It’s happening already. But like everything else here, this deal will be driven by that great national product of Texas — cheap land. Unimaginable amounts of land. And I am by no means speaking only of the vast amounts of land needed for right-of-way and terminals.

The real play here is for development rights in the areas adjacent to the bullet train, especially at the terminals. City staff are already prompting the Dallas City Council to begin thinking about “ancillary development” projects. And why would that be? The most likely reason for the council to get involved in private real estate development projects would be that somebody intends to ask for public incentives, probably in the form of some kind of major tax give-backs.

There are other troubling public policy implications beginning to emerge. Just when we thought we finally had put the Trinity toll road six feet under, the high-speed rail promoters have begun telling the city they want to put some of their rail project inside the Trinity River floodway, the political equivalent of digging up Dracula. But, hey, let’s put that one aside for the moment and just talk about land.

Between the physical project itself and the so-called ancillary development opportunities, we could be talking about land stretching all the way across Jacktown almost to old South Dallas on MLK Jr. Boulevard. Now, if it went that way, that would be the Big Thing that everybody’s been looking for.

So is this Big Thing a bad thing? Why? It doesn’t have to be bad. It could be a great thing. But that depends entirely on who’s in on it, who knows, who sees it coming, who gets to play, who is taken seriously. Is somebody going to go out there beforehand prospecting, looking up those guides I was talking about, getting with the tire repair shops and the churches and the convenience stores and the homeowners to make sure they’ll be in on it?

Or is it going to be the way most big Dallas gentrification strategies have worked in the past, D-Day, where the big money just comes booming out of the fog one day in landing boats and bombers? Look at the places where it has happened in the past. Short North Dallas, gone, not a trace, nobody even knows the name. Little Mexico. Little what? It’s happening right now in West Dallas. … Oh, excuse me, I misspoke, I meant Trinity Groves. Wow, before this is over, the whole city will sound like a high-end rehab center.

I want to offer a more particular focus, and that is our new mayor, Eric Johnson, who is a proud product of West Dallas. Before he became mayor, when he was a state representative from West and South Dallas, Johnson was the author of some really smart legislation aimed at achieving a productive truce between established but poor neighborhoods and the forces of gentrification. 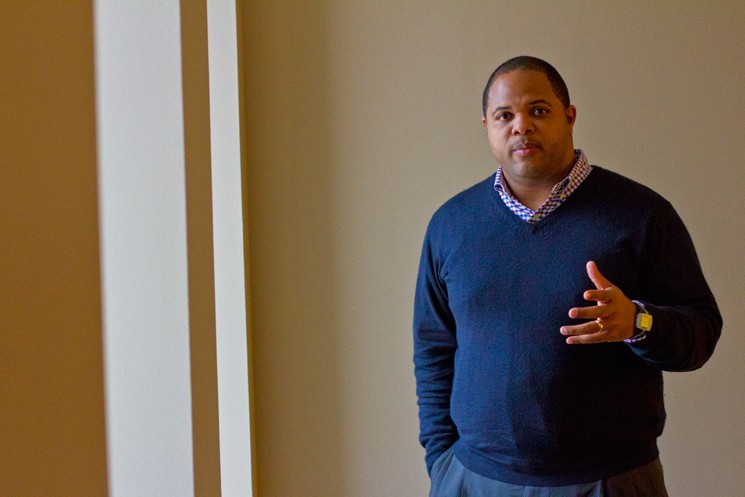 “If (Mayor Eric Johnson) is an equal-opportunity jerk, then at least we know the rules.”
Mark Graham
This being Texas, Johnson’s bill was attacked and slaughtered by club-wielding, animal-skin-clad, tree-dwelling conservatives. And, by the way, I will defend to the death the right of people to live in trees and be idiots if that is their free choice. I just wish more of them would fall out.

That’s one side of the new mayor. He knows the ground. He’s from the ground. He’s very bright. The guy graduated from every Ivy League school in the country. And he knows this issue, in particular, as it relates to South Dallas.


The issue of land in South Dallas is always fraught by the specter of eminent domain.

But here’s the other side: In his run for mayor, Johnson was financially backed by Ray Hunt, the oilman who is one of those big landholders at the southwest corner of downtown, who presumably is interested in bringing in the bullet train. And let’s get down to some even brassier tacks while we’re at it. The issue of land in South Dallas is always fraught by the specter of eminent domain.

Not Ray Hunt’s land. Nobody has to eminent domain Ray Hunt or the Decherd/Moroney/Dealey clan who control the old Dallas Morning News campus or Jack Matthews. They’ll be ready to deal, and their land titles will be clear as a big, blue Texas sky in July.

That will not be true of South Dallas. Land in South Dallas is famously clouded and tangled by title problems. The only way into much of South Dallas for great big deals will be via Austin and some kind of new land-clearing law. They won’t call it eminent domain, but that’s what it will be.

Does that mean eminent domain has to be bad for South Dallas? Why? It’s just like development itself. It doesn’t have to be bad. If you went to those guides I was talking about, those tough, deep-rooted founders, and asked them how to do it, they’d probably have some great ideas for ways to use eminent domain fairly and productively.

How, then, is Johnson going to lead on this issue? So far at a personal level and in a very short time he has developed a fairly awful reputation in the black community for being thin-skinned, crabby and defensive. But, listen, there may be a silver lining. I see indications that The Dallas Morning News and the rich guys are ticked off at him already, too. As a very prominent African American leader said to me this week, “If he’s an equal-opportunity jerk, then at least we know the rules.”

Bullet train. Eric Johnson. Gentrification. I think those three things are going to answer the question I started with. The Big Thing is coming, but what will it be?
KEEP THE DALLAS OBSERVER FREE... Since we started the Dallas Observer, it has been defined as the free, independent voice of Dallas, and we'd like to keep it that way. With local media under siege, it's more important than ever for us to rally support behind funding our local journalism. You can help by participating in our "I Support" program, allowing us to keep offering readers access to our incisive coverage of local news, food and culture with no paywalls.
Make a one-time donation today for as little as $1.