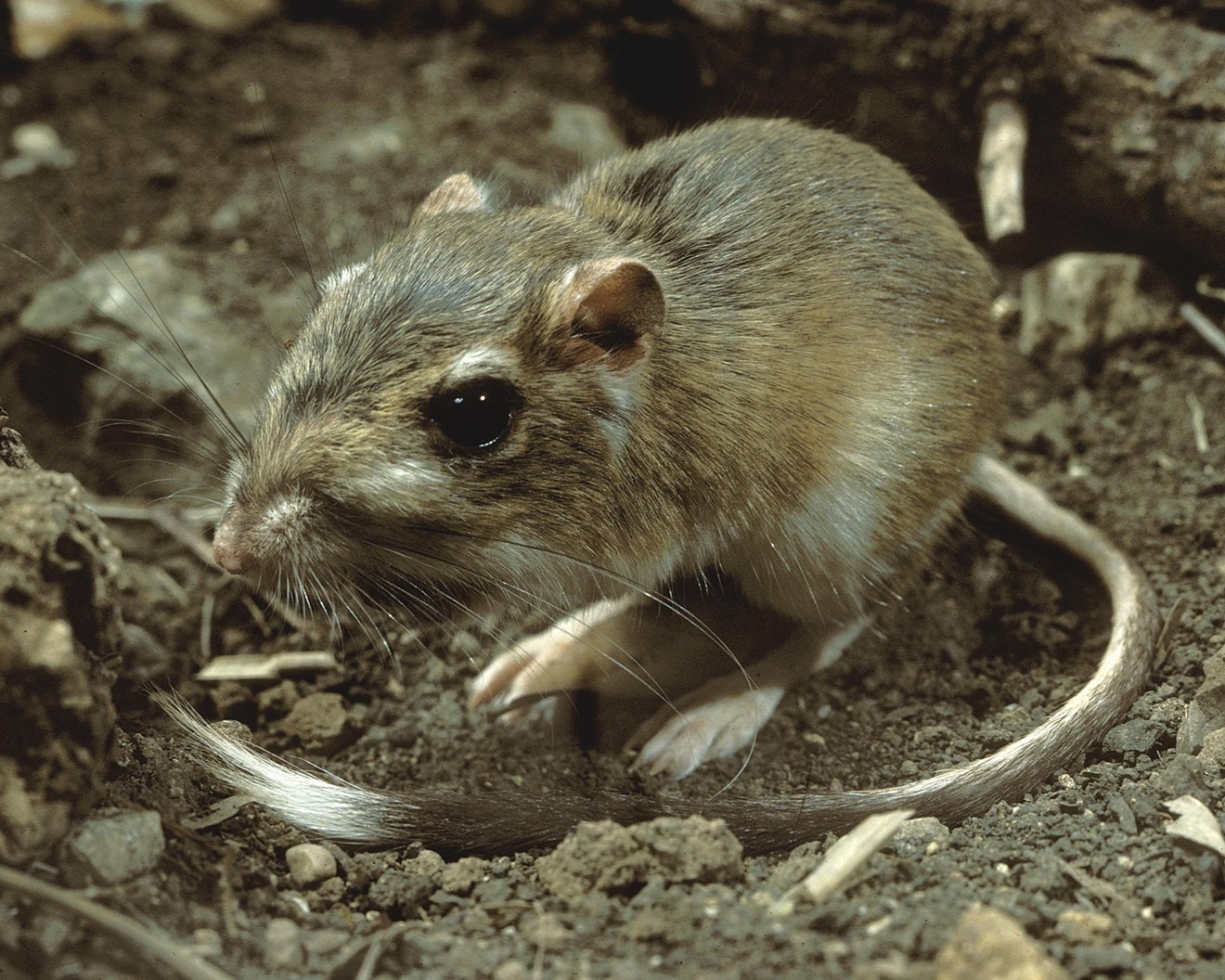 You can't see it in this photo, but the Texas kangaroo rat also has a white belly. courtesy U.S. Fish and Wildlife Service
The U.S. Fish and Wildlife Service wants to lend the Texas kangaroo rat a hand. They’re proposing measures to help sustain the Texas-native rodent species, which is seeing a decline in numbers because of multiple factors, including habitat loss.

According to the federal wildlife agency, the Texas kangaroo rat is a nocturnal rodent with long back feet, a long tail and external cheek pouches. Their name refers to the fact that they’re adapted for two-footed (bipedal) hopping like a kangaroo.

The feds are suggesting something called a “candidate conservation agreement with assurances” and an “enhancement of survival” permit.

“This is a collaborative, voluntary agreement that was developed with our state partner and input from private landowners,” Amy Lueders, the service’s Southwest regional director, said in a press release. “This innovative agreement will allow us to achieve the goal of conserving an imperiled species while providing regulatory certainty to the agricultural and agritourism industry in the Texas kangaroo rat’s historical range.”

If the protections are approved, private landowners would be able to volunteer their land and implement conservation measures to help the Texas kangaroo rat species. The landowners would get their own protections as well. Right now, the rodent isn’t listed as endangered. If it gets listed, the government has to come in with mandatory regulations to help out the species. In return for volunteering their property, according to the agency, the landowners “receive an assurance that, if the species is listed, they can continue to manage their land and waters as outlined in their agreements with no additional requirements.”

“The idea is that if proper conservation measures are being voluntarily implemented prior to a listing; increased regulation protecting the species might be unnecessary,” the agency said. “The most significant benefit of the [agreement] is that it will guide conservation actions that improve the status of this species and its habitat within the 11-county Texas range. However, the service cannot guarantee that participation in these agreement will prevent the listing of any species.”

The agency will publish a notice about the proposed agreement in the Federal Register on Feb. 22, which will will open a 30-day public comment period regarding the enhancement of survival permit. The U.S. Fish and Wildlife Service is asking landowners to submit their comments and questions about the protections in that time.

“The idea is that if proper conservation measures are being voluntarily implemented prior to a listing; increased regulation protecting the species might be unnecessary." – U.S. Fish and Wildlife Service

You can find the Texas kangaroo rat in Oklahoma and the Lone Star State. The range of the agreement includes the historical counties of Montague, Clay, Archer, Baylor, Foard and Motley.

The species is threatened by habitat fragmentation due to woody encroachment (increased population of indigenous woody plants), and the conversion of native rangeland to cropland. The Texas kangaroo rat is also believed to be completely weeded out from historical sites in Cotton and Comanche County, Oklahoma.

The conservation strategy under the proposed agreement was developed by the Texas Parks and Wildlife Department in coordination with the U.S. Fish and Wildlife Service.

The goal is to restore, maintain, and enhance the species’ habitat. To that end, the agency said conservation measures would include prescribed grazing, prescribed fire, range planting and reseeding, maintaining dirt road edges, and conserving prairie dog colonies.

While the agreement is implemented, the Texas Parks and Wildlife Department would track success and report back to the federal government. The state and federal agencies will meet once a year to discuss how everything is going, and continue these conservation efforts outside of the landowner agreements.

“The service and several of our partners are funding research that will expand our understanding of the species’ needs and inform conservation efforts,” the agency said.
KEEP THE DALLAS OBSERVER FREE... Since we started the Dallas Observer, it has been defined as the free, independent voice of Dallas, and we'd like to keep it that way. With local media under siege, it's more important than ever for us to rally support behind funding our local journalism. You can help by participating in our "I Support" program, allowing us to keep offering readers access to our incisive coverage of local news, food and culture with no paywalls.
Make a one-time donation today for as little as $1.