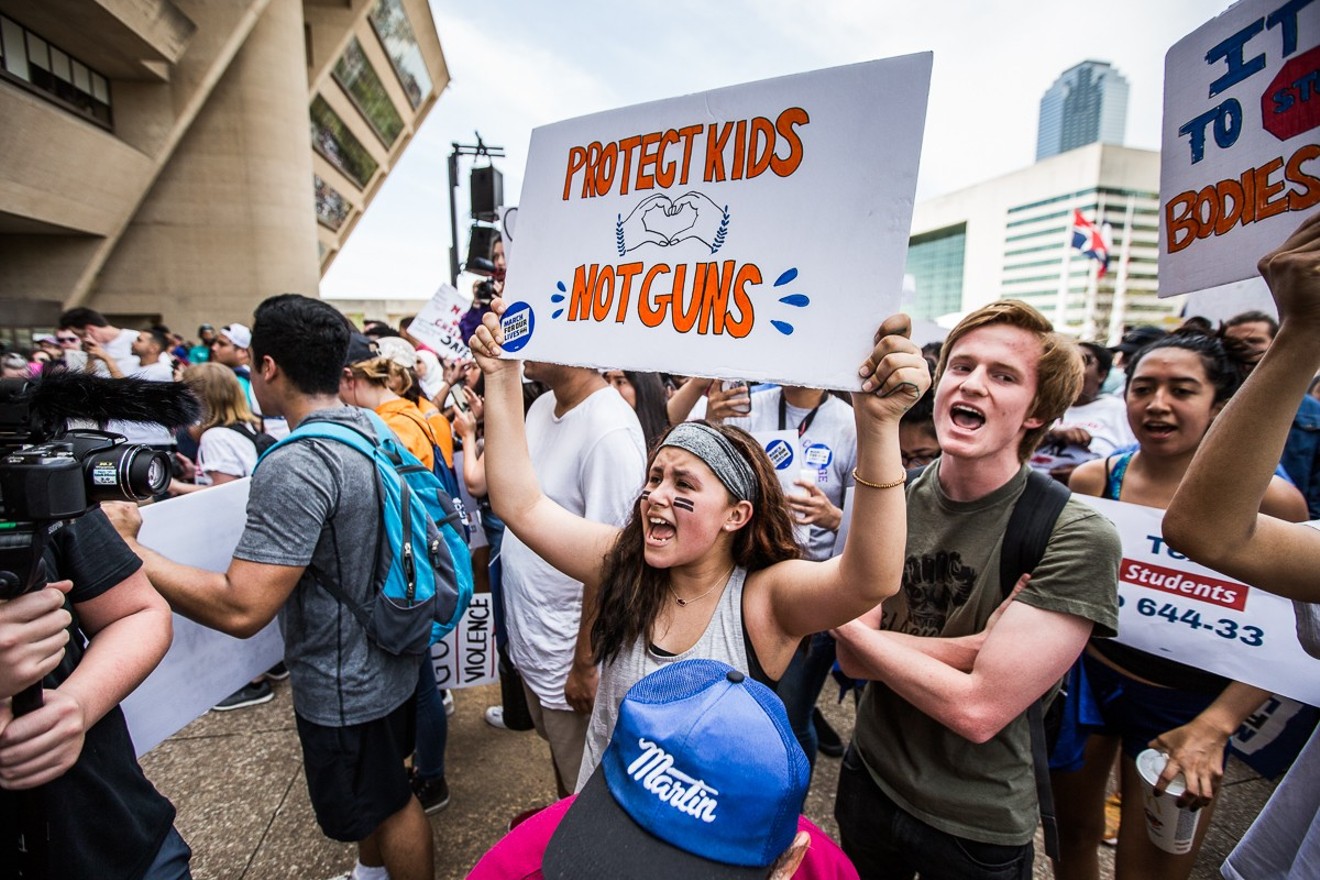 Students are taking a stand for gun control. Melissa Hennings
Justin Irwin won't forget Feb. 14. After losing friends and classmates to a gunman that day in Parkland, Florida, he marched in Dallas’ March For Our Lives to show his support for gun legislation.

Irwin was in Dallas to speak at Parkland Moves Us, a March 25 event hosted by Lovers Lane United Methodist Church to gather people and have open, honest and difficult discussions around the topic of gun violence.

“My goal for these marches is that this never happens again,” he said.

March For Our Lives, a student-led demonstration, took place March 24 in Washington, D.C., with more than 800 sibling events throughout the United States and around the world, including Dallas. In Washington, celebrities and supporters, along with Parkland students and staff, marched down Pennsylvania Avenue to the White House.

Parkland English and holocaust studies teacher Darren Levine, who attended the Washington march, said he feels like he’s in a nightmare and is still waiting to wake up.

“I was in my classroom when the fire alarm went off," Levine says. "My class was watching a movie, and we thought it was a drill or that maybe the culinary class in the same building caused it. When I saw the rest of the hallway and people exiting, we decided to leave, and when we got downstairs, there were kids coming back and janitors were telling everyone it was a code red.”

Melissa Hennings
When Levine’s class got back to the room, it went on lockdown with the belief that it was only a drill. That’s when Levine started receiving messages from friends asking if everything at Marjory Stoneman Douglas High School was OK.

“I responded, ‘Yeah, everything is fine. We’re on a drill,’ and my friend said, ‘I don’t think you’re on a drill. I’m picking my daughter up from school across the street, and there’s 40 SWAT cars coming toward Douglas,’” Levine said. “We went into waiting mode. We were scared. We had no idea what was going to be next, but eventually we were rescued by an emergency SWAT team.”

“It’s been very confusing. I have a lot of mixed emotions throughout the day and night — I’ve been very angry, very sad, shocked and disappointed,” he said. “But also, I’ve been very conscious and hopeful for the kids. I feel strong and proud … . I’m extremely proud of the students who’ve spoken up.”


“We need to be able to have an open discussion about doable solutions and put the safety of people before our love of the Second Amendment.” — Waed Alhayek, UT Arlington senior

Levine advises Parkland students to keep to their beliefs and to continue the momentum going toward change.

“I don’t want them to give up in the face of defeat. I want them to keep on going and stand up for what’s right,” he said. “I want them to believe in the idea that they can effect change.”

For students like Waed Alhayek, a senior at the University of Texas at Arlington, giving up is not an option. She led the communications and logistics task force for the Dallas march and is no stranger to gun violence.

At 7 years old, Alhayek went into a convenience store with a friend for snacks and was followed in by a man who closed the door, held everyone inside at gunpoint and talked about how unfair life had treated him. They were later rescued by police.

“I decided to get involved because I realized that the time was up to wait for someone else to start the conversation,” Alhayek said. “We need to be able to have an open discussion about doable solutions and put the safety of people before our love of the Second Amendment.”

Halvorsen served in the 101st Airborne Division in Fort Campbell, Kentucky, and in South Korea's demilitarized zone. He also worked as a teacher for Cypress-Fairbanks ISD for 12 years.
“I’m marching for all the children who can’t be here to help the voices because they’ve been shot,” he said. ”And to the Parkland students, we’re so proud of you and impressed with you. Please keep this going. We know this is hard, but please keep going.”

Irwin plans to. His faith and the people surrounding him help him cope with the tragedy.

Irwin hopes that nothing like this happens again and that in the future, there are improvements on background checks for gun purchases.

“There’s no reason it should’ve ever happened in the first place. There were so many warnings. He [the suspect] wasn’t allowed to carry around a backpack, and the cops were called on him multiple times. But somehow, someway, he was still able to carry an assault rifle,” Irwin said. “How he could walk in there like he had a clean record so easily is the reason change is needed to be made.”