Trump May Be Draining Swamps in Washington, but Our Swamp Looks Pretty Peaceful 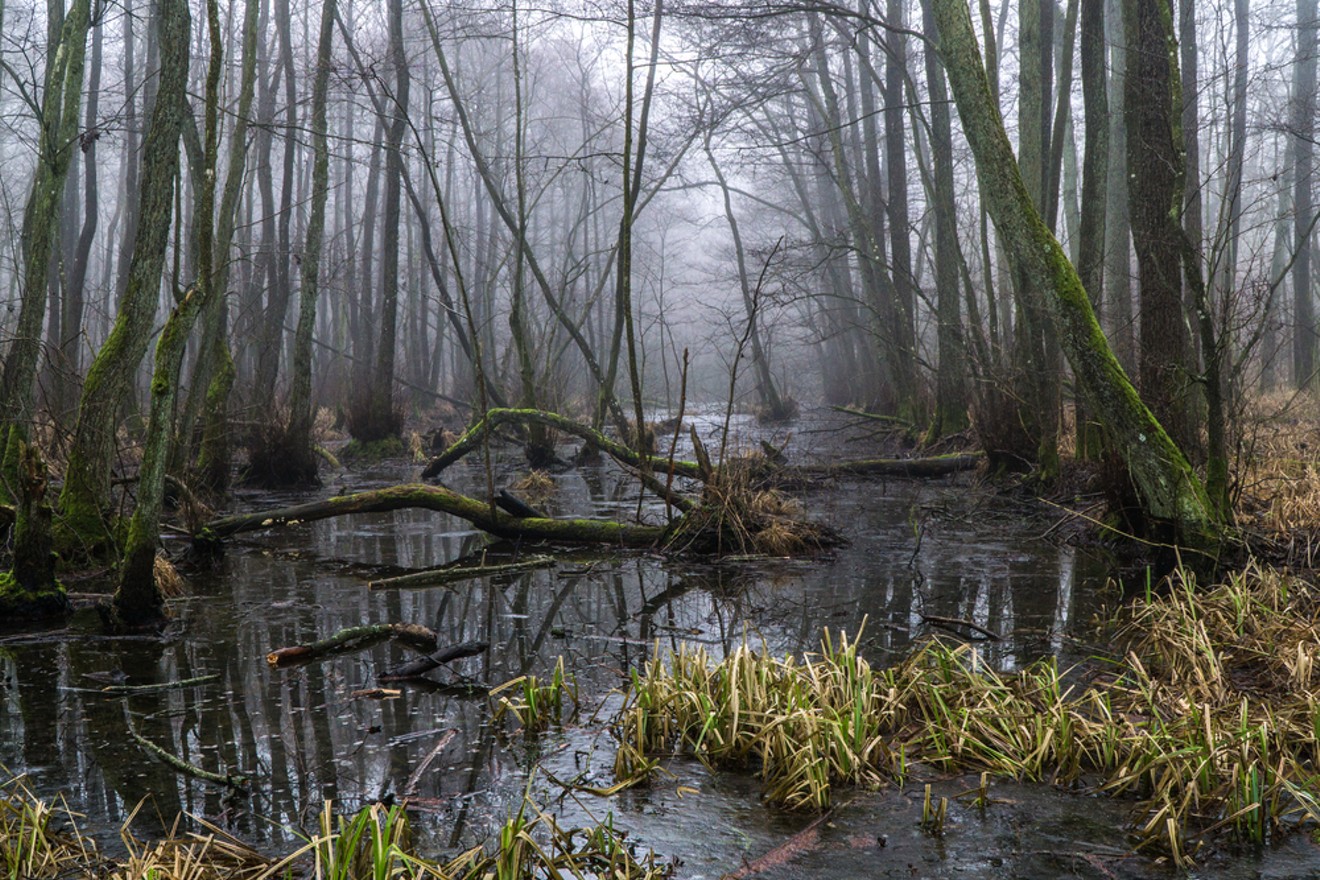 We’ve got what may well be hundreds of millions of dollars in missing and misspent money given to the city of Dallas by the U.S. Department of Housing and Urban Development in recent years. For a while, it looked like the feds might even go find it.

But ever since Trump’s appointee, Dr. Ben Carson, took over as HUD secretary, the swamp-draining personnel seem to have gone on some kind of horse tranquilizer. And I have a very strong suspicion why. The HUD people who should be doing the draining probably are sitting around instead, trying to get a read on their new boss, which has got to be like listening for signals from a stump.

They’re here, anyway. Federal gumshoes from the HUD Office of Inspector General have been in Dallas City Hall for months, probably at the express invitation of the new city manager who wants nothing to do with mischief that happened before his arrival. The feds have got the run of the place, but they seem to be on perpetual phone-hold.

The last I heard, they were regrouping to decide if their investigation needed to be restructured. So I guess that’s a regrouping to study possible regrouping. You know what that sounds like to me? It sounds like a group of people with their wet fingers in the air, waiting for a breeze.

We here in the swamp already know where the federal money went missing. In March 2016, more than a year and a half ago, Dallas City Auditor Craig D. Kinton published a report saying his people had sampled just 10 percent of activity by the Dallas Department of Housing and Community Services, which hands out most of the local HUD money, and had already found $29.9 million in expenditures for which the bookkeeping was “either absent, limited, inconsistent or incomplete.”

The HUD people who should be doing the draining probably are sitting around instead, trying to get a read on their new boss, which has got to be like listening for signals from a stump.

So, right there. The Housing Department. Carson may be a brain surgeon, but his boss, the president, is a businessman, right? So Trump knows what it means when people take his money and then tell him they don’t have receipts to show how they spent it, no signed contracts, canceled checks, no paper trail for almost $30 million. BAD!

And that’s from only a 10 percent sample of everything the housing department does. How much more would Kinton have found if he had audited 100 percent of the department’s finances? $300 million? That begins to be real money, does it not? Most of that is federal money the president is supposed to be keeping track of for us.

Especially since that money was intended for purposes of good, lots of people here would like to help HUD find it, and everybody wants to make sure hundreds of millions more won’t sink into the same green lagoon.

A month before Trump was elected, Shirley J. Henley, the regional HUD official responsible for the money, asked Bernadette Mitchell, then head of the Dallas Housing Department, what she was doing about Kinton’s report. Mitchell, who has since resigned, wrote Henley back saying Kinton’s report hadn’t been all that good a report, and really the Housing Department staff just didn’t have time to do much about it.

Dallas Observer
“The City Auditor’s Office has not provided specific details on their file review; only generalization of the concerns,” Mitchell told Henley. “Given the number of files and projects reviewed, in the absence of additional information, we have no way to direct follow up or whether our follow up will address the concerns noted in the audit report.”

I don’t think that one is the finger normally used to hunt for breezes.

But Kinton, the auditor, stayed on the case. In a City Hall email stream that HUD officials certainly saw (since I published it),
Kinton took a sharp blade to Mitchell’s claims.

“When this audit was briefed to the Housing Committee,” he wrote, “management had an opportunity to voice any concerns about the audit. I recently reviewed the recording of this meeting and there was no mention in the testimony ...  regarding concerns about the conclusions of the audit.

“Furthermore, no one from management has requested any additional details about the files reviewed subsequent to the audit completion.

“To suggest that this office ‘has not provided specific details on their file review, only generalization of the concerns’ is disingenuous at best.”

Disingenuous is a term used in government correspondence to mean dishonest, a whopper, pants on fire, a big fat lie. But, look: I need to point out something else here that’s important about the chronology. All of this stuff took place before new Dallas City Manager T.C. Broadnax started the job last February. Since showing up from out of town, Broadnax has signaled pretty openly that he’s on HUD’s side. He wants to find where the HUD money went.

Broadnax replaced Mitchell, the departed housing chief, with David Noguera, whom he hired from HUD in Washington, where Noguera had worked with cities that had problems with HUD money. So instead of the fox guarding the henhouse, Broadnax hired the rooster.

Dr. Ben Carson, the new HUD Secretary, is busy fighting on the big-issues front, which leaves the swamp to its creatures.
CJ Hanevy via Shutterstock
In other words, the new Broadnax regime at Dallas City Hall has openly welcomed and embraced HUD’s investigators, even making office space available for them inside City Hall months ago. But what has happened since?

The word I get from well-informed sources is that investigators on the staff of the HUD Office of Inspector General started to investigate the Kinton report, then halted their work in order to carry out a “survey,” which is a study to determine what other studies may be needed. Yeah. Not exactly full-tilt boogie.

And why might that be? Why do we suppose a bunch of career federal employees with retirements to think about might be just a tad shy about rushing into our local swamp right now? Well, what signals do we see coming from their new boss, Dr. Carson?

Carson visited Dallas in March. In response to a reporter’s question, he said he was “very aware” of the missing money problem in Dallas. But that was it. Very aware. There you have it.

Back in Washington, Carson has gotten himself sued by a consortium of civil rights groups over a decision by HUD to delay implementation of a long-sought policy believed by supporters to be a useful tool in achieving racial desegregation. The policy, called the Small Area Fair Market Rent rule, would have made it easier for poor renters who use federal rent vouchers to move into less racially segregated neighborhoods.

The policy, the product of years of research and public discussion, was scheduled to go into effect this January, but Carson’s HUD headquarters decided in August that the policy was half-baked and needed to be mothballed. Groups suing HUD over the decision characterize it as part and parcel of an assault on civil rights by the Trump administration.

In years of litigation, two real estate developers, Curtis Lockey and Craig MacKenzie, have made the case that Dallas has used its HUD money for the opposite of the federally mandated purpose. With major support from HUD’s investigators, the pair have argued that Dallas actually used HUD money to increase segregation.

The city did that, Lockey and MacKenzie have argued, by dishing HUD money to developers who shouldn’t have gotten it. The city has used the lack of bookkeeping on the money, the absence of a proper paper trail, as a tactic in defending itself against Lockey and MacKenzie’s claims.

Get it? If you could establish a proper paper trail, you’d be able to prove what the city did with the HUD money one way or the other. To prove that the city had mishandled the money, even engaged in malfeasance, you would demonstrate that it handed out the HUD money in ways that increased racial segregation instead of decreasing it.

But wait a minute. If you’re one of these retirement-seeking federal OIG people embedded in City Hall right now, why on earth would you want to do that? Really? You want to stand up from your desk next time the secretary comes through on a tour and say, “Guess what, Dr. Carson? I can prove Dallas gave all our money to a bunch of conservative Trump-supporting real estate developers instead of spending it to achieve racial desegregation the way the law says they were supposed to.”

Right. And then you get a gold star? More like your cardboard box.

It’s probably silly and naive to try to extrapolate from our local situation to what’s going on or not going on in Washington. All we can know is what we see in front of us.

What we see in front of us is the swamp, still full and unperturbed. The HUD OIG people are all sitting around our City Hall trying to guess each other’s weight. The chances of ever fishing anything out of that swamp diminish with each passing day.

If there is any effect here of the HUD secretary’s forays into the big social questions of the day, the effect is pretty much business as usual. Since Carson took over in Washington, the swamp is probably the safest place to be in Dallas.