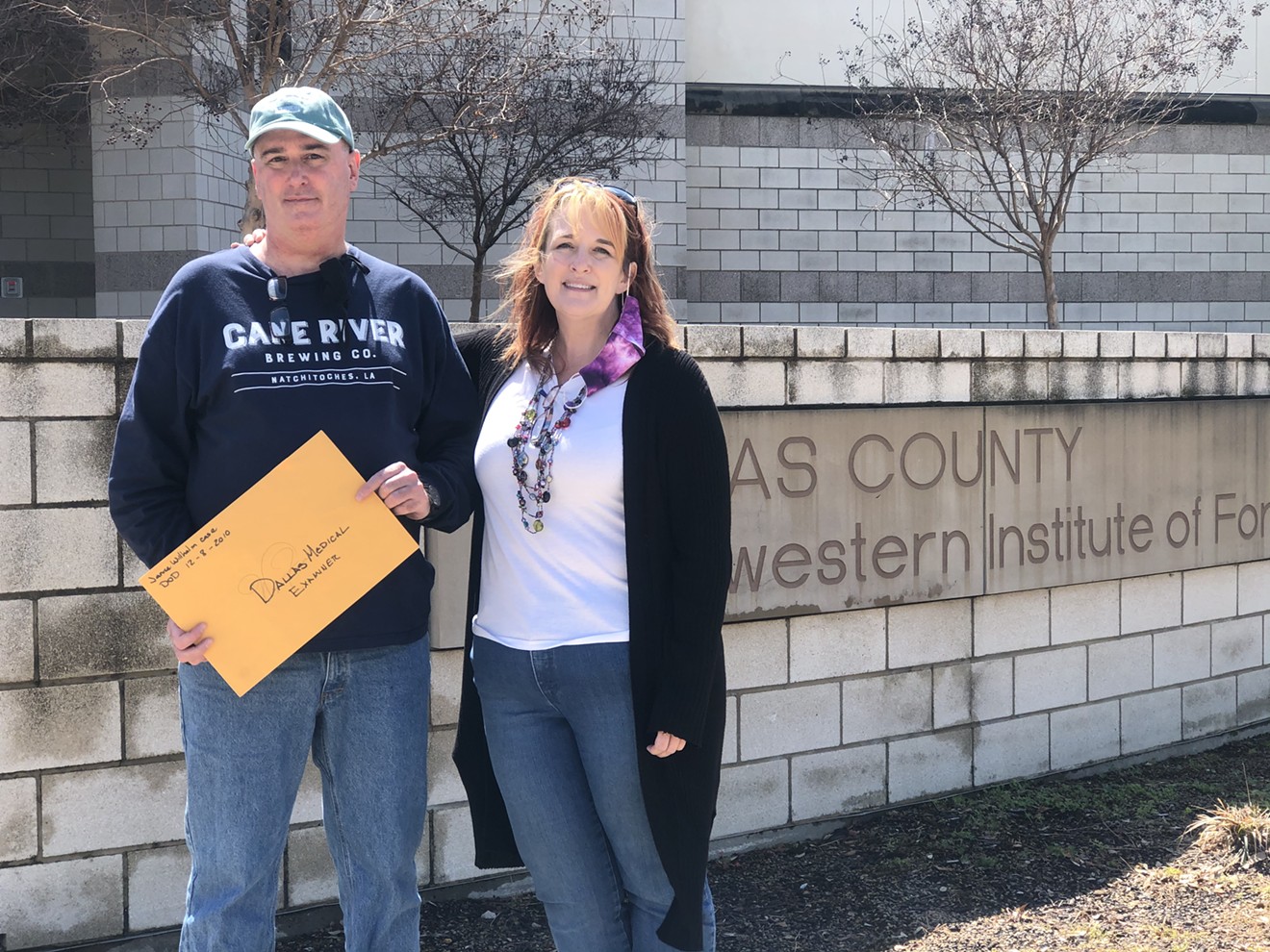 They each held white binders, stuffed thick with documents they say prove the Dallas medical examiner and law enforcement had it wrong when they ruled their mother's death a suicide. Eleven years later, Davis and Robeson still don't buy that theory. The pair believe someone killed their mother.

After their mother, Janice Lee Willhelm, was found dead in her blue recliner, authorities transferred her body here to be examined at the institute. “No one will communicate with us or talk to us that has any sort of authority about this,” Davis told the Observer.

Make no mistake: Davis wants justice. But it's her brother who has gone deepest into investigating their mother's death. Davis says some of the findings are simply too dark for her to handle.

For decades, Willhelm had worked as a nurse at hospitals around the Dallas area. She had seen a lot, even patients who'd tried to kill themselves but failed, people who shot themselves but botched it.

Sometimes at dinner, she'd mention the failed suicide attempts. "I would never do that, not that way," she'd say, Davis remembered. "There's too many things that can go wrong."

“No one will communicate with us or talk to us that has any sort of authority about this." - Jennifer Davis

Their father would shut down those conversations, insisting that the topic wasn't appropriate for the dinner table.

At the time Willhelm died, Davis figured they didn't know how deeply she was suffering emotionally. “I just came to terms with the situation, had closure and was moving on,” she said.

But they later noticed that the signature at the bottom of the will wasn’t their mother’s, they claim. It said her name, but not in her writing. “I was like ‘Oh my God, I think this is a forgery,’” Davis said. Her brother agreed.

Robeson, an Army veteran, is now armed with a trove of new evidence he believes could help uncover the truth and persuade the Dallas County Medical Examiner's Office to reevaluate her case.

In her mid-60s at the time, Willhelm was found dead at her home in Centerville, around 130 miles south of Dallas. She had previously suffered a stroke and was disabled. Doctors had also removed an 8-inch tumor from her left arm; after the surgery, she could hardly use it.

The way Leon County authorities told it, she had hoisted a gun with her left arm and shot herself in the side of the neck. Her son says she had trouble lifting a TV remote.

“They claim she shot herself, and as soon as she shot herself, they drilled an oil well in what used to be her front yard and made millions of dollars,” Robeson told the Observer. “I believe they shot her because she was holding up oil production."

Robeson has long doubted official reports by law enforcement and wants to have his mom's cause of death changed. For the last decade, though, neither Leon County authorities nor the Dallas County Medical Examiner's office has budged.

Leon County Justice of the Peace Jack Keeling, who deemed Willhelm’s death a suicide, did not return the Observer’s request for comment.

Willhelm’s homestead rested on land rich in minerals, and “immediately” after her death, her widower signed an oil and gas lease, Robeson said. A month or two later, they started drilling “the first of several wells.”

Over the years, Robeson and his sister have commissioned independent investigators to look into their mother's death. Their findings “strongly suggest” homicide, according to a letter submitted to Dallas County’s Medical Examiner. Robeson says he's unsure who pulled the trigger, but he's certain she wasn't suicidal.

A Texas Woman’s University alumna, Willhelm worked at Parkland Hospital for a time. Officials said they’d found a goodbye letter at the scene, but Robeson said it was scrawled on a decade-old nurse’s note that had been dated.

Crime scene photos also show Willhelm with both of her hands tucked under a blanket. The weapon she’d used to supposedly shoot herself was found 6 feet away, Robeson said.

“As I looked at the case and I started looking at the physical evidence and the photographs of the crime scene and how it was handled, I became highly suspicious." - Avery Ensley, private investigator

“As I looked at the case and I started looking at the physical evidence and the photographs of the crime scene and how it was handled, I became highly suspicious," he said, according to that outlet.

Also in question was Willhelm’s will, which left her estate to her husband, Gerald. Robeson and Davis believe the will's signature was forged, however, and a handwriting expert later agreed.

NBC-DFW was the first to break the story regarding the family's suspicions, and Gerald Willhelm was found dead 24 hours after it aired, Robeson said. His former stepfather had transferred the oil-rich property to two friends.

Two ballistics reports, one of which was performed by the Texas Department of Public Safety, also concluded the shooting was a homicide, Robeson said in his letter to the medical examiner. Famed pathologist Vincent Di Maio also investigated the case and reported he suspected foul play.

The family has hit one roadblock after another along the path to uncovering the truth behind their mom’s death, Robeson said. Although he’s not confident the medical examiner will change his mother’s cause of death, he’s not giving up: Along with his sister, he intends to keep fighting to win back their mother's estate.

“We don’t have any choice,” Robeson said. He laughed dryly. “What are we going to do — just let them, you know, kill you?”
KEEP THE DALLAS OBSERVER FREE... Since we started the Dallas Observer, it has been defined as the free, independent voice of Dallas, and we'd like to keep it that way. With local media under siege, it's more important than ever for us to rally support behind funding our local journalism. You can help by participating in our "I Support" program, allowing us to keep offering readers access to our incisive coverage of local news, food and culture with no paywalls.
Make a one-time donation today for as little as $1.