Now Rick Perry's a Genius. That's Where We Are in This Country Today. 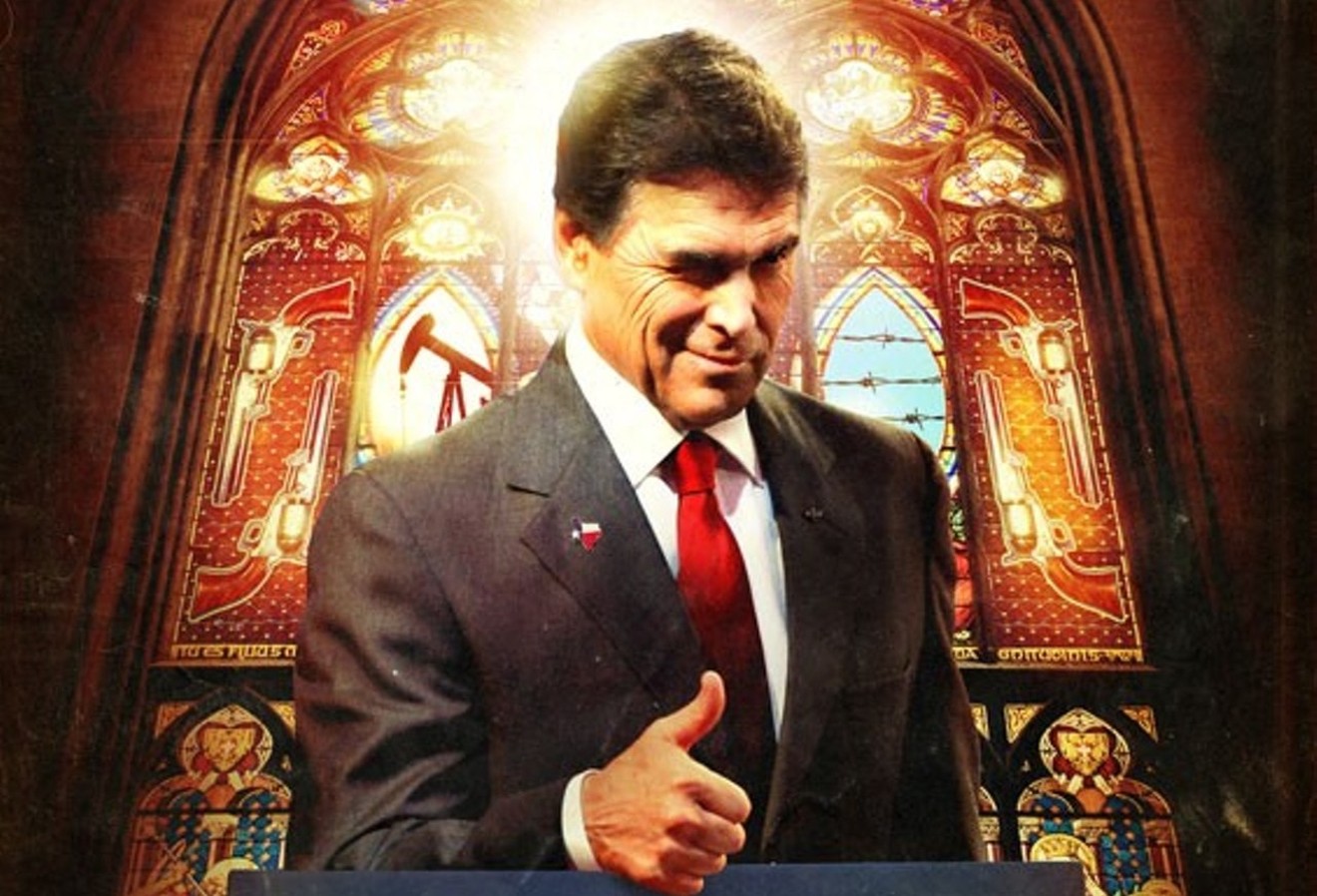 No, in fact, it’s more than that. Our former leader, the one and only Governor Oops, is not only being called the smartest man in the Washington, but people also are poring over his words, searching for Delphic wisdom.

When he was governor of Texas, I used to pore over his words, searching for the English language. It’s where we are today.

Perry, now President Donald Trump’s energy secretary, told reporters in Washington this week, “As the world understands better how Donald Trump negotiates, there may not be as much angst. Or there might be. I just made my point there.”


“As the world understands better how Donald Trump negotiates, there may not be as much angst. Or there might be. I just made my point there.” — Rick Perry

Amazingly, everyone seemed to think he had made a point. No one knew what it was. But that’s why people think he’s a genius.

Perry’s oracular style is viewed in Washington as a counterpoint to the leadership style that might be called impu-tweeting. Impu-tweeting is what happens when a leader’s most rudimentary impulses are prematurely aborted from the mind as tweets before being given a fair opportunity to be born as thoughts.

Tom Benning, Washington bureau chief of The Dallas Morning News, reported that Perry told reporters this week, “We could put all our eggs in one basket,” and have cheaper electricity. But, Perry said somberly, we would have to be ready for “the potential to have some really chaotic events.

“When they are out of power, when it's hot or it's too cold, and their families are in jeopardy and you can't operate the financial systems in this country, people are not going to be asking the questions about 'Gee, did you make the right economic decision?’”

They’re not? That seems like exactly what they would be asking — did the White House make wrong decisions? — to determine if White House decisions are what caused the country to run out of energy.

But maybe that’s not the point. The point — the thing causing Perry to stand head and shoulders above the rest of the Trump cabinet — may be that no matter what he says and regardless whether anyone can understand it, there seems to be some kind of momentary delay, like the seven-second delay on radio talk shows, between his initial thought formation and his utterances.

And everyone just finds that so enormously refreshing. People could listen to Rick Perry all day. They feel better. Less scared.

In the relative context of things, Perry’s words seem to work a certain calm on people like a Sufi mantra. Who knows? He might not even be as effective if people could understand what he was saying.

Speaking of tariffs and their possible harmful effects on the energy sector, Perry told the reporters in Washington that the United States needs to be “thoughtful about our approach globally.” He declined to endorse Trump’s position that the North American Free Trade Agreement is one of the worst deals ever made by this country, saying, “I wouldn’t necessarily use those words.” But he said NAFTA should be renegotiated anyway because “25 years is a long time.”

Admittedly, standing head and shoulders over the rest of the administration is a low bar. We all know all about that, and I’m not going to dredge back through all of it here. That stuff is getting so boring.

Every time I turn on CNN, Wolf Blitzer is giving me owl eyes again, telling me, “THIS JUST IN! TRUMP STILL STUPID!” I’ve gotten to where I would watch CNN more often if it had a story once in a while about something Trump did that wasn’t stupid.

Perry is being praised, for example, for not ordering wildly expensive office furniture at taxpayer expense, like Housing and Urban Development Secretary Ben Carson, or demanding a special $43,000 Superman phone booth in his office, like Environmental Protection Agency Administrator Scott Pruitt, who says he needs to be able to talk on the phone without being overheard by other people in his office, as opposed to asking them to step out.

Rick Perry thinking to himself while watching the president speak: "Say nothing that they can understand."
The White House
These acts of self-denial — denying himself the lavish furniture, the soundproof phone booth and so on — have got people calling Perry statesmanlike. Was there ever a more telling comment on the times?

To be imperfectly fair to Perry, I have to concede that nobody who has worked with him or known him personally has ever bought the national media caricature of him as a dumb guy. That was all snap-judgment sound-bite stuff from presidential TV debates, which have got to be one of the stupidest ways in history of assessing leadership qualities.

In rereading my stories about Perry when he was running for president in 2016,  I came across this quote from a Democratic political consultant who had run gubernatorial campaigns against him:


“People are not going to be asking the questions about 'Gee, did you make the right economic decision?’” — Rick Perry

Of course, part of what the consultant admired in Perry as a campaigner was that Perry listened to his consultants. But a larger point, apparently visible in the way he’s running the U.S. Department of Energy, is that Perry at least consults experts in his department before deciding whether it’s politically expedient for him to ignore them.

Compare that with Pruitt, who doesn’t even want to pass an expert in the hallway. Pruitt, the phone booth man, has been busy firing serious scientists from his agency’s staff and rewriting agency rules to favor industry-backed studies. He doesn’t ever want to to deal with the consternation of hearing or reading anything remotely challenging to his personal bias — a mindset even more truncated than the impu-tweet. Maybe it should be called the impu-booth.

Another aspect of Perry’s relative ascendancy is genuinely thought-provoking. He is being given credit for having a thick skin and for maintaining a certain gladiatorial equanimity in the fog of political warfare. In other words, when swords are flashing and blood speckles the wall, Perry can give and take with the best of them. But when the day’s battle is done and there is bread to be broken, he can sit at a white tablecloth as a gentleman and pour a glass of wine for the foe who blooded him earlier.

It makes me wonder. This is something that has never once occurred to me in the past. But is it possible there may be something good that can come from being involved with the Texas Legislature for years? Before now, I honestly never imagined such a thing.

But it’s possible. Think about it. Compare Perry with the thin-skinned, screaming ninny, political mama’s boys all around him. Every time one of the rest of Trump’s cabinet gets even a medium hardball question from the ever-sang-froid Anderson Cooper, he or she starts bleating for the entire American people to ride to the rescue.

And the president himself. Oh my God. If somebody gives him even a modest head-knocker, you can almost see the salty tears pouring from his tweets.

And all of that bragging he does about how he could beat somebody up with his hands tied behind his back if he wanted to? Do that in Austin one time, and somebody will be waiting for you in the parking lot.

Maybe that’s it. Maybe Austin and the Lege are exactly the right finishing school for the Washington of today. Maybe Perry looks around at his peers in the cabinet, squirming and writhing in the unaccustomed glare of their newfound prominence, and thinks to himself, “These boys need to go back home to the apron-strings.”

So many of the rest of them, including Trump, went to the White House from their protective phone booths, the ever-comforting wombs of unchallenged privilege and belief. Compare that with Austin, where illusion goes to hell. When Perry was governor of Texas, he couldn’t count on getting from his office to his car without dodging a dozen pitchfork-wielding imps and half-clad slatterns, all intent on intimate compromise.

And then there’s the big thing. If Perry came to Washington knowing one thing that seems to have escaped the rest of them, it’s that when you’re in the spotlight, people can see you. That’s why they call it the spotlight.

It’s what the spotlight is for. So people can see you. It’s their spotlight. It’s not the sun. The people turn on their spotlight and point it at you so they can see what you’re doing.

The glare is astonishing to those who have never experienced it before. Think of the now ignominiously deposed former secretary of Health and Human Services, Tom Price. As secretary, he took charter flights costing taxpayers millions of dollars and was shocked to find that people had been able to see him doing it.

Interior Secretary Ryan Zinke got caught taking a government helicopter to go horseback riding. Now he knows that people can see him even up in the sky. And then there is Treasury Secretary Steven Mnuchin, who had planned on slipping out of town for a quiet honeymoon trip aboard a United States military aircraft. He and his new bride were utterly taken aback when they got caught. How did anyone even know?

Rick Perry knows. He doesn’t put on a necktie in the morning without knowing exactly what he’s headed out into for the day. He knows that reporters only want him to talk so they can get him to say “oops” again, and he doesn’t intend to do it for free, nor does he intend to get himself in trouble with the Orange One.

So he says wise-sounding things that make absolutely no sense. And in this climate, we’ll take it.
KEEP THE DALLAS OBSERVER FREE... Since we started the Dallas Observer, it has been defined as the free, independent voice of Dallas, and we'd like to keep it that way. With local media under siege, it's more important than ever for us to rally support behind funding our local journalism. You can help by participating in our "I Support" program, allowing us to keep offering readers access to our incisive coverage of local news, food and culture with no paywalls.
Make a one-time donation today for as little as $1.