At the World Food Championships (WFC) at Fair Park this past weekend, spectators were in for some fabulous tasting opportunities and a few surprises. Among those surprises was the top-score earner of all the first-round categories. Preston (Ethan) Nguyen, an 18-year-old freshman in the El Centro Culinary Program at Dallas College held the high score, not just in his contest category but for the entire weekend.

That means Nguyen is headed to the final round of the WFC on Monday with a notable lead. Other Dallas area chefs headed to the final round are Jean Francois Fortin of the Fairmont Hotel (third), Jason Rehbock of Omni Dallas (fifth), Anthony diCesare (ninth) of the Embassy Suites Denton and Chef Matthew Axtell (seventh), who worked in the Dallas restaurant industry for years before moving to Port Aransas in 2018.

Dallas area teams competing but not advancing to the top 10 included the team from Asador at the Renaissance Dallas hotel led by Joseph Graffeo and a team from Virgin Hotel Dallas, led by Krystal Perez, who was one of only five women in the chef competition. 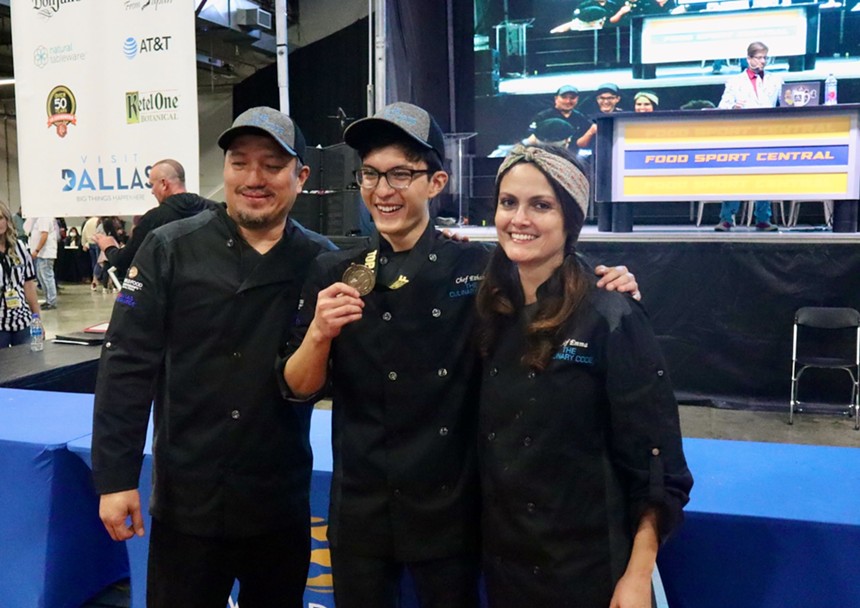 Ethan Nguyen with his parents, who also happen to be his sous chefs, Emma and Peter Nguyen.
World Food Championship
Chef teams for this event consist of a head chef and two sous chefs; Nguyen’s parents, Emma and Peter Nguyen, stepped into those supporting roles. Nguyen credits his parents with teaching him much of what he knows about food. Emma is a trained pastry chef who attended El Centro college 24 years ago. Peter, an attorney and real estate agent, is also a full-time student in the culinary program at Dallas college. Father and son currently take classes together and the family regularly shares time cooking and eating together.


Nguyen attended the Culinary Program at the Dan Dipert Career Training Center in Arlington during his last two years of high school, completing an internship at Prince Lebanese Grill in Arlington where he now works part-time. “Aziz Kobty has been an amazing mentor to me,” Nguyen says. “He’s shown me not only how to execute food preparation, but also the networking and business side.”

For the structured dish, a required element in the World Food Championships, chefs were asked to prepare their version of a Wellington. Nguyen’s dish (which scored 98.375 out of 100) was a Wagyu Beef Wellington with wild mushroom duxelle and reduction sauce, goat cheese mashed potatoes, asparagus tips with bearnaise sauce and balsamic pearls.

Nguyen’s response to his recent victory was remarkably calm. “First, I’m taking a deep breath. Lol,” he texted the Observer. At the time, he and his family were busy preparing for Monday’s final round.

“We are hitting all the culinary stores and grocery stores for food and spices, since we have to provide most of our own ingredients," Nguyen wrote. "We have a pretty good idea of what we’ll be making but need to make sure the ingredients are available and work well together.

"This year, the WFC is incorporating an ‘X-Factor’, so we are coming up with something that will really wow the judges in a unique way. Then the rest of the day, we’ll be doing practice runs for timing and taste.”

The competition has given Nguyen a chance to follow his passions — faith, family and food. “The takeaway from this contest for me is that you really can achieve your goals with hard work and passion,” Nguyen said. “We felt so intimidated when we saw the roster of chefs we would be competing against, but we made a plan and worked hard for it.

“As Gusteau from my favorite childhood movie Ratatouille once said, 'Anyone can cook!'”

Nguyen also said that although he is listed as Ethan Nguyen on the WFC website, he prefers to go by his middle name, Preston. So take note of that name from which we can expect much good food in the future: Preston Nguyen. You can follow his latest food creations and adventures on Instagram, and we’ll update this story with the results of the final round when they come in.
KEEP THE DALLAS OBSERVER FREE... Since we started the Dallas Observer, it has been defined as the free, independent voice of Dallas, and we'd like to keep it that way. With local media under siege, it's more important than ever for us to rally support behind funding our local journalism. You can help by participating in our "I Support" program, allowing us to keep offering readers access to our incisive coverage of local news, food and culture with no paywalls.
Make a one-time donation today for as little as $1.