After 20 Years, Austin-Based Tacodeli Credits Its Success, in Part, to Dallas Taco Fans

Tacodeli's carne asada and Pollo Fantastico tacos. The taqueria started in Austin but now has two Dallas locations, and it's about to celebrate its 20th year in business. Chandler Gibson
Coming up on 20 years in business, Tacodeli has a reputation as one of the most responsible taco chains in Texas. Since its beginnings in Austin, Tacodeli has incorporated authentic Mexican flavors into each of their taco creations. With their ingredients sourced mostly from Texas, Tacodeli is an active supporter of local farms and vendors, ensuring that each of their creations are made with love.

When he first conceived Tacodeli, founder Roberto Espinosa wanted to bring to Texas something that could only be found in his first home.

“The original concept was food from my memories of growing up in Mexico City that I couldn’t eat here,” Espinosa says. “I was only there until I was 10 years old, but obviously those are formative years.”


“Dallas has a very well-respected culinary scene. From a restaurateur perspective, if you’re going to grow, you need to be successful in Dallas, because it can be a harbinger for other cities.” — Eric Wilkerson

Espinosa opened the first Tacodeli store front in Austin in 1999.

“Our original location on Spyglass was just barely bigger than (a) truck,” Espinosa recalls of the 740-square-foot storefront.

Soon after the opening the first storefront, Espinosa joined forces with Eric Wilkerson, who is now a co-owner of Tacodeli.

“My background was in information technology,” Wilkerson says. “I was a business consultant and I was traveling around a lot. I made the mistake of pursuing a degree based on what it would pay me and not with any consideration of if I liked doing it. I quickly realized that regardless of compensation, if you don’t like what you’re doing, then you’re in a dead-end position.” 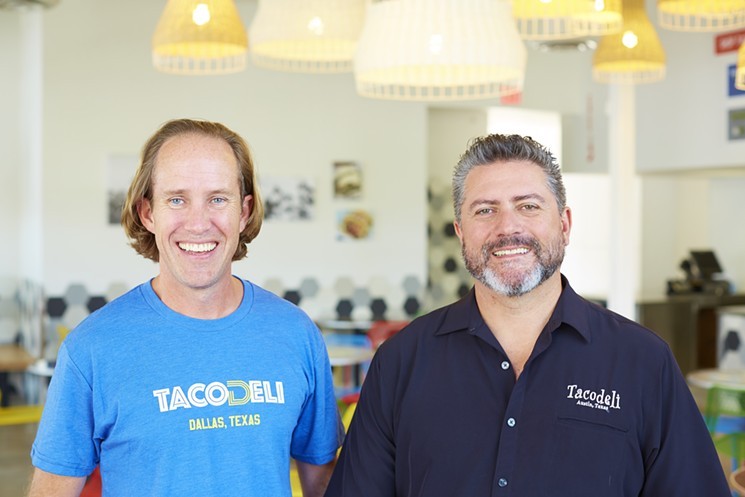 “‘99 came and went, and the sky didn’t fall,” Wilkerson says, “and I was determined to not go back to consulting.”

Espinosa and Wilkerson first met through mutual friends. Upon hearing of Espinosa’s concept for Tacodeli, Wilkerson immediately loved his entrepreneurial appeal. With Espinosa’s chef skills and Wilkerson’s business experience, the pair are a match made in salsa-filled heaven.

“We have a lot of complementary strengths,” Wilkerson says. “We can tell from working together that the sum of the parts is greater than the individual.”

Espinosa and Wilkerson incorporate the “sum of all parts” motto in the workplace by remaining open to feedback from both their customers and their employees. In fact, one of their most famous salsas, the Salsa Doña, is a creamy jalapeño recipe that was crafted by one of their employees. 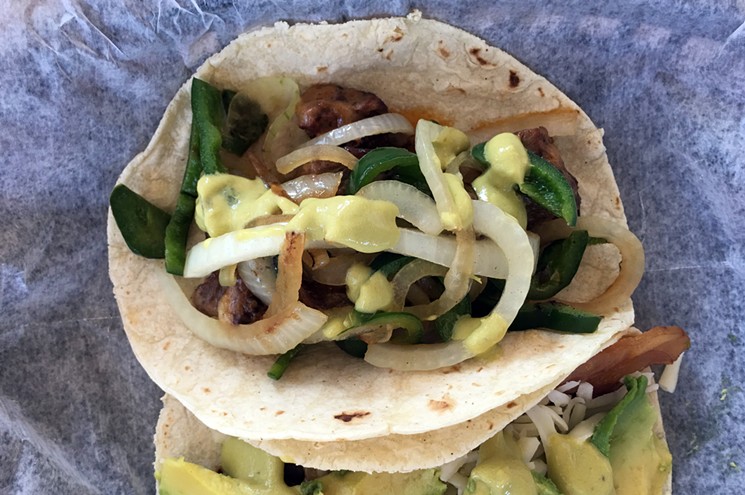 Tacodeli's Frontera Fundido sirloin taco
Beth Rankin
Espinosa first tasted Salsa Doña when he held a contest among his employees. An employee named Bertha Gonzales brought her Salsa Doña in a Daisy Sour Cream container for him to judge. Little did she know that Salsa Doña would become a Tacodeli staple.

“I asked the staff to bring a salsa that they were proud of and that would showcase their abilities,” Espinosa recalls. “Everybody brought one and they were all pretty good and I was very impressed. But most of them were pretty standard, nothing really outside of the ordinary offerings you would find at most Mexican restaurants.”

Upon tasting Salsa Doña, Espinosa knew it would be a hit, noting that he felt like John Travolta opening a briefcase full of money in Pulp Fiction.

After much success in Austin, Tacodeli opened in Dallas in 2015, adding a second location at The Hill shopping center at Central Expressway and Walnut Hill Lane in 2017. Two Plano locations came next.

“Dallas has a very well-respected culinary scene,” Wilkerson says. “From a restaurateur perspective, if you’re going to grow, you need to be successful in Dallas, because it can be a harbinger for other cities.”

Now with 11 locations across Texas, Tacodeli is making an effort to use as many responsibly sourced ingredients as possible. They make their tacos with pasture-raised eggs and ingredients from as many local vendors as possible.

“We have recipes that we’ve developed with local partners,” Espinosa says. “In Dallas, we use Tortilleria la Norteña, which is owned by Luiz Perez. When we found him, he was making tortillas with beef-rendered fat, which were really delicious.”

Although Espinosa and Wilkerson originally enjoyed Perez’s tortillas, they needed something suitable for their vegetarian and vegan customers.

Tacodeli's famous breakfast taco, the Otto
Beth Rankin
“He formulated a recipe based on our criteria,” Espinosa says. “They are really amazing tortillas. He makes them fresh for us every morning and delivers them the same day.”

As part of their conscious business model, every Tacodeli store is open only until 3 p.m., allowing their employees to work reasonable hours and have time enjoy life after clocking out for the day.

“There are a lot of people in the restaurant business that are not fans of having to close down the restaurant at 10:30 or 11 at night,” Espinosa says. “(Our model) provides people a career in the hospitality industry without some of the additional sacrifices that come with it. We do work long hours, we just start earlier than a lot of other people.”

Regardless of diet choices, Tacodeli regulars can feel good about the choices they are making, owners say.

“We have a wide variety of lean proteins and seafood,” Wilkerson says. “You can be as indulgent as you like. If you want pork belly, we’ve got it. If you want a vegan taco, we’ve got that as well. The common denominator is that you don’t feel like you’re making a sacrifice. Food is a bond among everyone. It’s something that quite literally makes you feel good. We’re surrounded by a lot of great people, and they make all of this happen.”

Tacodeli, 1878 Sylvan Ave. (West Dallas/Sylvan Thirty) and 8031 Walnut Hill Lane (North Dallas/The Hill)
KEEP THE DALLAS OBSERVER FREE... Since we started the Dallas Observer, it has been defined as the free, independent voice of Dallas, and we'd like to keep it that way. With local media under siege, it's more important than ever for us to rally support behind funding our local journalism. You can help by participating in our "I Support" program, allowing us to keep offering readers access to our incisive coverage of local news, food and culture with no paywalls.
Make a one-time donation today for as little as $1.