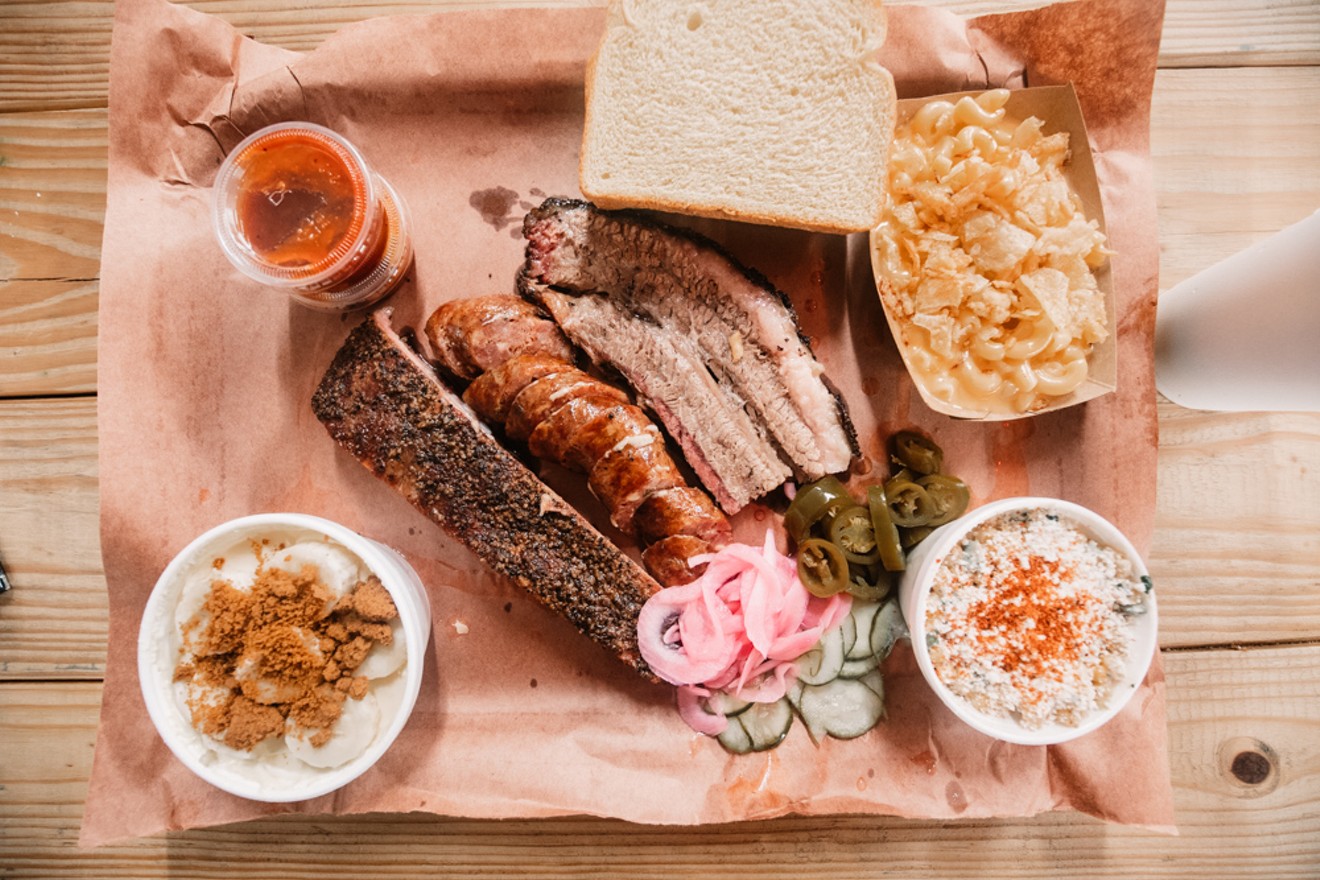 You may spend a little more time in line at Helberg Barbecue, but this is how barbecue is meant to be. Chris Wolfgang
After spending last year at home, we're ready to gas up the car and go somewhere. BBQ Road Trip is a series in which we take a day trip to visit barbecue spots outside of Dallas just in time for summer road trip season.

It's mid-morning on a recent Friday, clouds have quickly filled the sky over Dallas and rain feels imminent. The only break in the clouds appears to the south, which is conveniently the direction we're headed. Meanwhile, Interstate 35E, the unscrupulous temptress with a penchant for ensnaring travelers in her concrete grasp, is feeling particularly kind this morning, and traffic moved briskly.

Not wishing to tempt fate any longer than necessary, we skipped off I-35 just before Hillsboro then snaked our way through rolling hills and verdant fields just to the south of Lake Whitney into the west side of Waco and the suburb of Woodway. 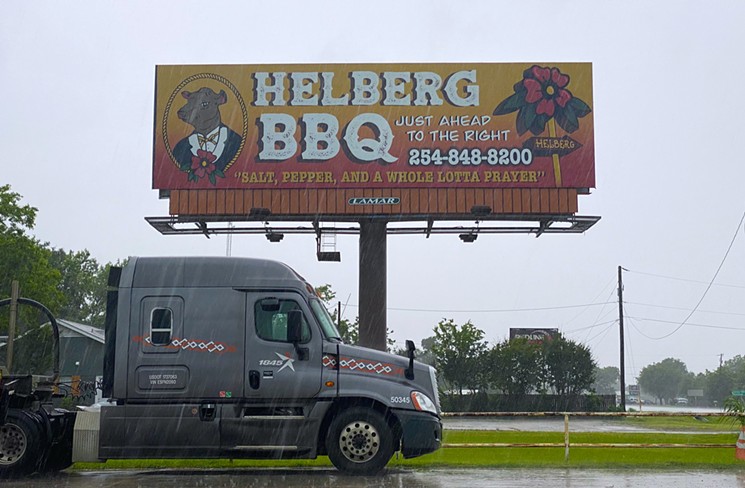 Keep an eye out for this billboard on Highway 6, and the goodness of Helberg Barbecue will be close at hand. (And hopefully, you won't be looking for this during a late spring deluge like we did.)
Chris Wolfgang
We were on the lookout for Helberg Barbecue, and you should heed our advice to keep an eye out for their large billboard as you head west on Highway 6. Philip and Yvette Helberg's restaurant is just a few hundred yards ahead on your right. Stay sharp; it's easily missed, although the full parking lot hinted that we were in the right place.

We arrived just after the opening lunch rush, which gave us plenty of time to take in the venue and the menu. Helberg's is located in a cavernous corrugated steel building, and inside you'll find high ceilings and picnic tables cast through the dining room. Possibly the largest Texas flag we've ever seen indoors hangs on one wall; a giant caricature of Dolly Parton and Willie Nelson occupies another.

All of Helberg's meats are cut and weighed to order, in increments as small as a quarter pound. Individual sides are a reasonable $2.50 each, so it's quite easy to build a tray of just what you're craving. In our case, we craved a Texas Trinity, so that meant ordering a quarter-pound each of moist brisket ($25/lb), one mammoth spare rib ($18/lb) and a link of jalapeño-Gouda sausage ($16/lb). A small banana pudding ($3.50) rounded out our order. 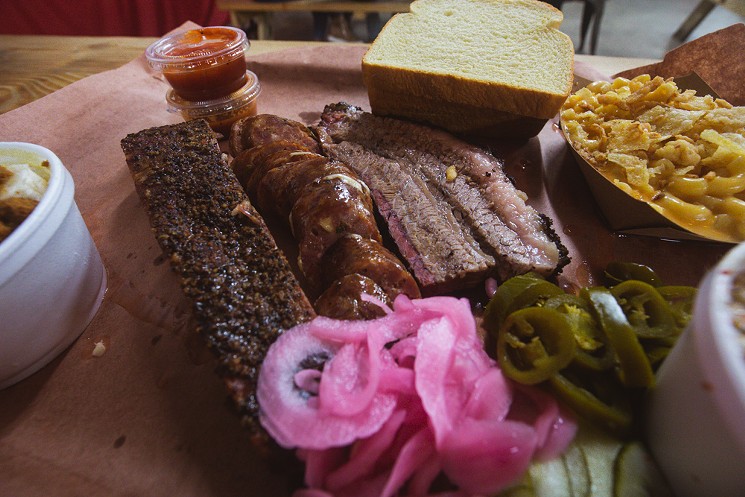 Helberg Barbecue loves the tradition of Texas barbecue, expressed here as the Texas Trinity of ribs, sausage and brisket.
Chris Wolfgang
After we ordered, we grabbed a seat at a vacant picnic table underneath the massive Texas flag and realized that eating remarkable barbecue under that flag might be the most Texas thing we've ever done.

While everything looked great as we ordered it, what struck us most were the personal interactions during the ordering process. Whether it was checking on our brisket preference, recommending the spicy sausage or suggestions on how they dressed out sides, the level of interaction with the staff building our order stood out. Even our banana pudding was finished out with bananas sliced on top right after we ordered, then sprinkled with a Graham cracker topping. Philip Helberg tells us that's all by design.

"We won't ever be on GrubHub or Uber Eats," he explains. "You can't order on our website. We want to interact with everyone. It's a few extra seconds, but it's important to us. Barbecue has started to shift into a fast-casual thing, and that's OK, but that experience is what's special to me."

Yvette and Philip Helberg, owners of Helberg Barbecue on the western edge of Waco.
Chris Wolfgang
Philip and Yvette Helberg see barbecue as evolving and improving, but their hope for Helberg Barbecue is to be an anchor for the way things used to be done. If that means a little more time in the ordering line to make sure the customer gets exactly what they want, then that's fine with them. "Sacred" is a word that Philip uses often in describing the history of the barbecue business.

Helberg Barbecue certainly nails the sacred barbecue favorites. The moist brisket was the right choice, with a thick and peppery bark that encased the tender beef. After seeing the Brobdingnagian rack of pork spare ribs, we knew that one would be more than enough, and the smoky pork flavor only reaffirmed our recent love of all things rib-related. The Gouda-jalapeño sausage was an elevated and creamy twist on a Texas barbecue classic.

Sides are equally impressive. We were wowed by the street corn salad, with sweet yellow corn held together with spices, crema and cotija cheese. We got our macaroni and cheese topped with potato chips and French fried onions, which gave an unexpected crunch to the picnic staple. Fresh banana slices and a brown sugar and Graham cracker crumble added to the banana pudding after ordering is just one of Helberg Barbecue's personal touches.
Chris Wolfgang
"I feel like barbecue has become very one-texture, and it's dominated by that sweet succulent rich fatty meat. We wanted to do something to add some different texture," Philip says of his take on the cheesy pasta standby.

Perhaps the best part of this trip was watching Philip and Yvette work the restaurant they've clearly built with mountains of passion. Yvette alternated behind the serving counter and visiting regulars in the dining room, while we first spied Philip taking out trash before he stopped by our table to introduce himself and see how we were enjoying our meal.

Ostensibly, Central Texas is the cradle of our state's barbecue history, a story born in small towns that dot the Hill Country. It's great to see places like Helberg Barbecue, those that may not have the provenance of legendary barbecue names but understand the importance of keeping the traditions of barbecue alive in their own establishments, keeping those stories alive.

Any Dallasite knows how fickle I-35 can be when it comes to heading south to Waco or Austin. From downtown Dallas, the drive down I-35E then west on Highway 6 in Waco is 115 miles that should be less than a two-hour trek, but weekends or accidents (or both) can make you regret your road trip decisions. We stayed off I-35E as much as possible, but bailing before you get to Waco should be considered requisite. We got off the interstate in Hillsboro, then took TX-81 to pick up TX-22, and headed west towards Whitney. After the Lake Whitney Dam, look for FM 56 then FM 2490 to head south into the west side of Waco. It's a bit longer by distance, but wildly less traveled.

Making A Day Of It (The No Shiplap Edition)

Cameron Park Zoo is located within the 400-plus acre Cameron Park reserve in Waco. Inside the zoo, visitors can see a wide variety of native and foreign animals in open habitats. Cameron Park itself is a gem among urban parks, with plenty of trails, recreational areas and playgrounds for the youngsters.

Next to Lone Star or Shiner Bock, is there a more Texan beverage than Dr Pepper? If you agree, a visit to the Dr Pepper Museum is in order. Dr Pepper and Texas have a long and entertaining history together, and the memorabilia alone is worth the visit.

From Nolan Ryan to Tom Landry, sports fans will want to stop at the Texas Sports Hall Of Fame. It's not just a celebration of athletes born in Texas; the museum highlights players who have made key contributions to Texas' varied sports history.
KEEP THE DALLAS OBSERVER FREE... Since we started the Dallas Observer, it has been defined as the free, independent voice of Dallas, and we'd like to keep it that way. With local media under siege, it's more important than ever for us to rally support behind funding our local journalism. You can help by participating in our "I Support" program, allowing us to keep offering readers access to our incisive coverage of local news, food and culture with no paywalls.
Make a one-time donation today for as little as $1.