Cowtown Is Killing It: The Best New Barbecue in Fort Worth 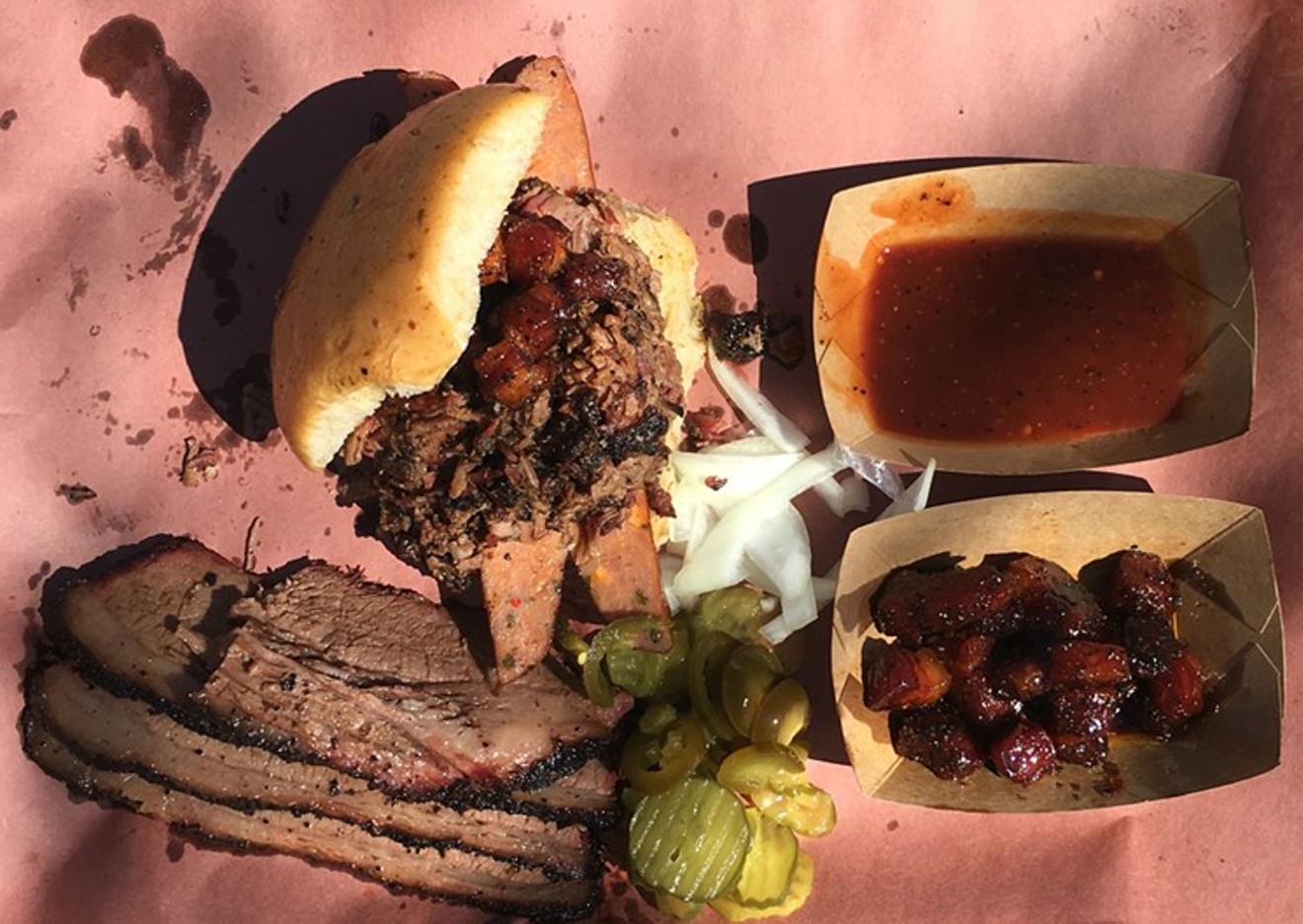 Heim Barbecue Beth Rankin
Don't let our name fool you: Even though we're the Dallas Observer, we love nothing more than sharing great barbecue finds from all over the Dallas-Fort Worth area. And judging from our latest travels, Fort Worth is absolutely killing it in new barbecue right now. There is immense joy to be found in the city's purveyors of sublime smoked meats, and you don't need a giant Stetson hat or new pair of Lucchese calfskin ropers to fit in. Consider this list your primer for your next Cowtown barbecue adventure. 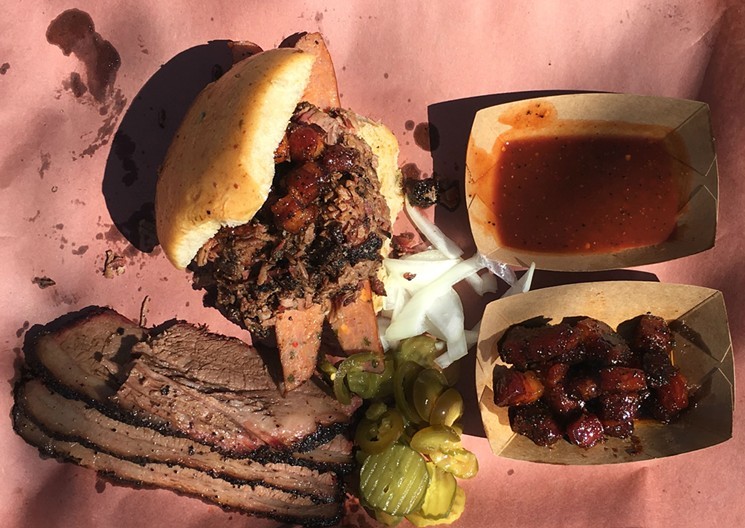 Heim Barbecue on the River

5333 White Settlement Road, Fort Worth
Three years after opening its first brick-and-mortar, Heim Barbecue brought us a second location in Fort Worth's River District earlier this spring. There's all the barbecue goodness of the original location (think delectable brisket, massive beef ribs and bacon burnt ends) but with the added bonus of a full-service bar and a large patio when the weather cooperates. Finally, while both Heim locations are open six days a week, the River location is closed Mondays while the Magnolia Avenue location is closed on Tuesdays, allowing you to get your meat and drink on no matter the day. 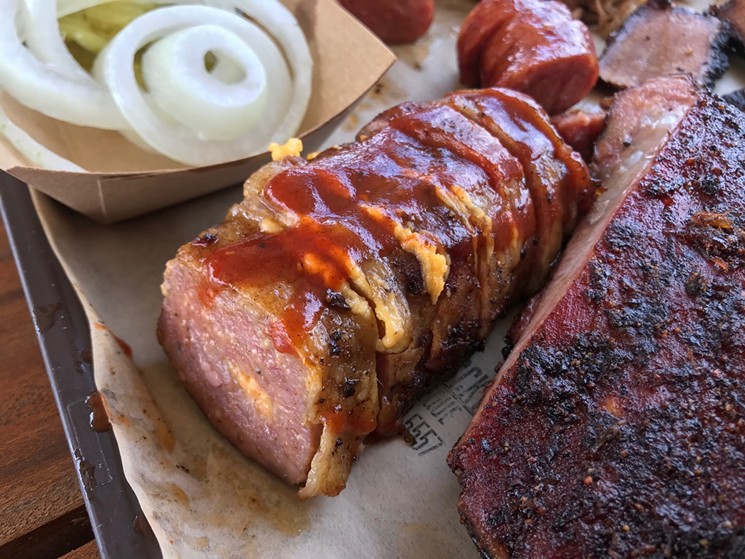 1734 E. El Paso St., Fort Worth
Summer weekends are meant for cookouts and beer drinking, but if you can’t or won’t do it yourself, a trip to Joe Riscky’s Barbecue nicely fills the gap. After a split from the family's namesake barbecue business, Joe Riscky opened in perhaps the most ideal spot in Fort Worth, right across the lawn from Wild Acre Brewing. The barbecue choices from Joe Riscky's are all solid, but if you're not ordering a sausage bomb with your meal (a cheese-stuffed jalapeño, encased in sausage, then wrapped in bacon), then you're not living your best life. 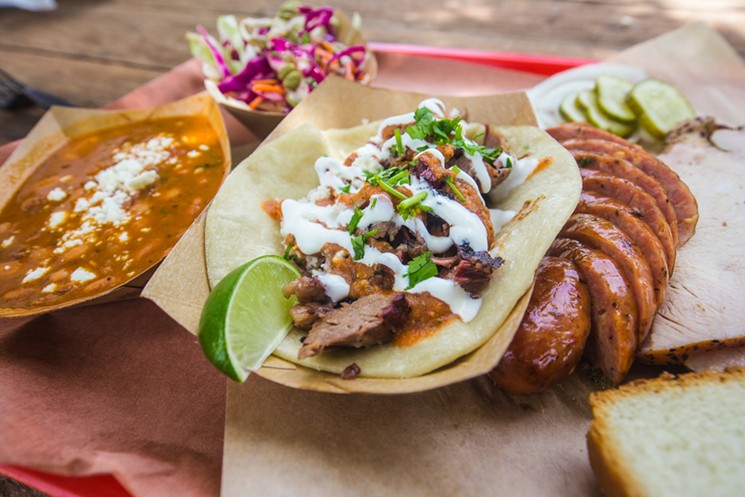 Flores Barbecue has the brisket taco you've been dreaming of, with beans and slaw that make the perfect accompaniment.
Chris Wolfgang

4801 Edwards Ranch Road, Fort Worth
Earlier this year, Flores Barbecue closed up shop in Whitney and moved 60 miles north to Fort Worth, and we couldn't be happier for the relocation. Everything coming out of Flores' trailer (a brick-and-mortar is in the works for next year) will impress, from the impossibly moist turkey and flavorful sausage, to the inventive sides. You should also avail yourself of Flores' tacos, made with brisket fat tortillas and stuffed with your choice of brisket or carnitas. 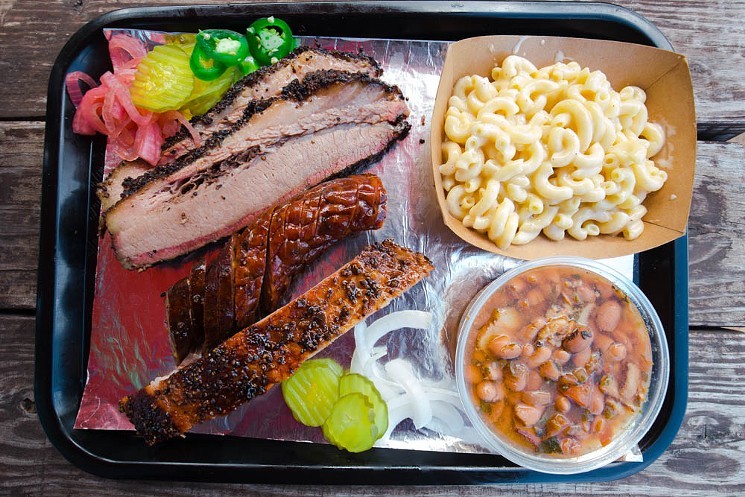 201 E. Hattie St., Fort Worth
While not a new player to the Fort Worth barbecue scene, Panther City continues to impress us with each visit. Not only is their truck fare impressive, but the amount of food you get on a two-meat plate for $16 will satiate the most hearty of appetites. Save room for specials such as pork belly poppers or the incredible elote cup topped with smoky brisket. Panther City makes our new list thanks to the work of co-owners Chris Magallanes and Ernest Morales, who are working on a permanent structure next to their current location that should be open soon. 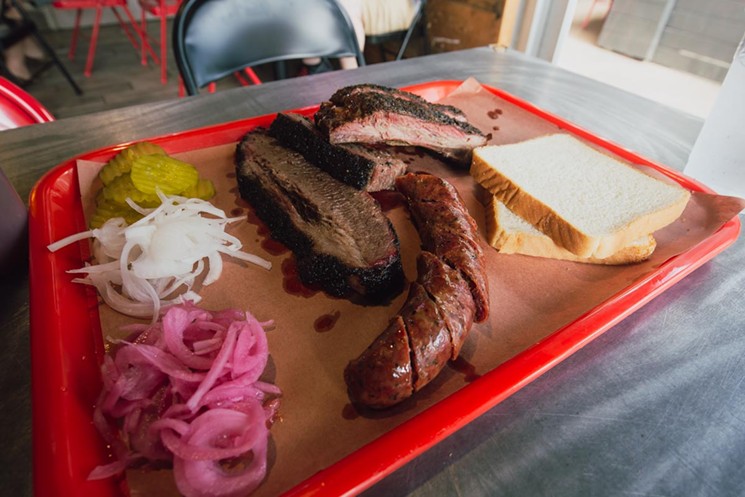 Derek Allan's is the newest Fort Worth spot for barbecue and already wildly popular.
Chris Wolfgang

1116 8th Ave., Fort Worth
Derek Allan's Texas Barbecue was already popular before we set foot in the door, for good reason. Start with the wagyu brisket, which melts in your mouth in both lean or moist varieties. Or maybe you're a rib fan, in which case, the ribs at Derek Allan's may quickly become your gold standard. Sides are solid, there's plenty of beer, and desserts are made completely from scratch every day. Just make sure you show up early; Derek Allan's combination of a smart location and brilliant barbecue make early sellouts a possibility any day of the week. 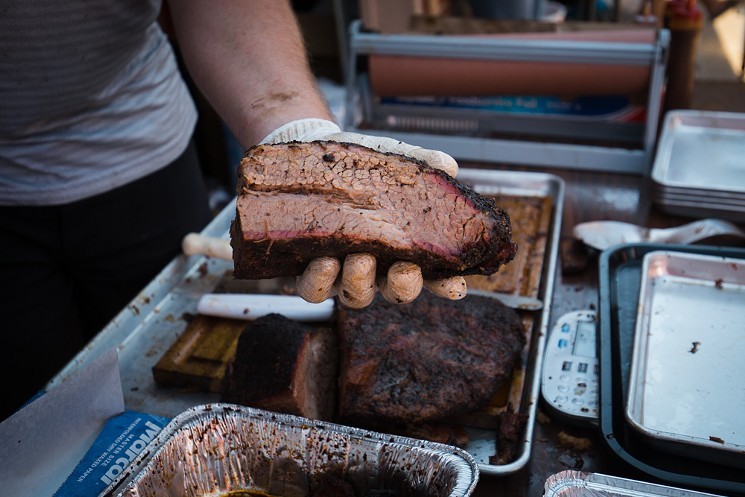 Dayne's Craft Barbecue made a name for themselves on the pop-up scene and will parlay that success to a brick-and-mortar location.
Chris Wolfgang

Be on the lookout

Dayne’s Craft Barbecue and BBQ on the Brazos
We've been a fan of Dayne's Craft Barbecue ever since we discovered pitmaster Dayne Weaver doing underground barbecue pop-ups last year. After building an impressive following, Dayne's has a brick-and-mortar location in the works at 2000 W. Berry St. Meanwhile, BBQ on the Brazos has been one of our favorite barbecue joints for years, even though few people in Dallas seemed to know of them. Originally doing business out of a gas station in Cresson, co-owner John Sanford recently announced he was moving BBQ on the Brazos back to Fort Worth and will call the spot at 3803 Southwest Blvd. home later this year.
KEEP THE DALLAS OBSERVER FREE... Since we started the Dallas Observer, it has been defined as the free, independent voice of Dallas, and we'd like to keep it that way. With local media under siege, it's more important than ever for us to rally support behind funding our local journalism. You can help by participating in our "I Support" program, allowing us to keep offering readers access to our incisive coverage of local news, food and culture with no paywalls.
Make a one-time donation today for as little as $1.