Best Breweries for Cyclists in Dallas Community Beer Company has great ties with cyclists. Christopher Durbin
It’s almost spring. That means we’re seeing colorful buds on branches, vibrant greens returning to trees and warmer temperatures. It's time to break out the spandex, air up the tires and risk life and limb bicycling on Dallas streets — and, of course, drink beer.

Breweries and bikes go well together. The laid-back vibe of the spaces, the kind of people who hang there and ride bikes, and the excuse to consume carbs after a long ride make for a perfect marriage of suds and pedals.

So, I contacted Kristie Holt, who owned the wonderful Local Hub Bicycle Co., which was in Deep Ellum. I’ve ridden with her, had beers with her and if I really needed help with a route, I’d probably bug her to help me with that.

This time, I reached out to learn about where cyclists like to go for mid- or post-ride drinks. When she got my text, she had just rolled up to Manhattan Project.

I’d add to her list or disagree with her on some if I could, but her list is solid. These are mostly close to downtown Dallas, which is a good spot to hit a trail, no matter which direction you’re going. (I'll save rants about trail connections and bike infrastructure for another time.)

If you’re on a bike in Dallas, here are some top spots to stop with your group (or yourself, no one’s judging). Cyclists at BrainDead Brewing: Kristie Holt (a frequent advocate for better bike infrastructure) is center. The author is on the left, and former City Council member and fellow food writer Philip Kingston is on the right.
Taylor Adams

2625 Main St. (Deep Ellum)
This is a perfect spot, which anyone realizes when driving by it because there are frequently bikes parked on the patio or locked to the bike corral. If you’re on one of my favorite trails, Santa Fe, and heading downtown, this is a perfect spot to stop — the food’s decent, too.

1530 Inspiration Drive, Suite 200 (Design District)
This is an obvious one. While you’re waiting for your beer to be poured here, you’ll see cycling jerseys to the side for sale with the company’s name on it. Community has a cycling team, after all. One of my favorite beers is here, I need more friends and I should get more exercise, so I have no clue why I haven’t joined it. But even if you’re like me and haven’t, this is still a good spot because you can park your bikes inside and keep an eye on them. Afterward, go ride by the levees. 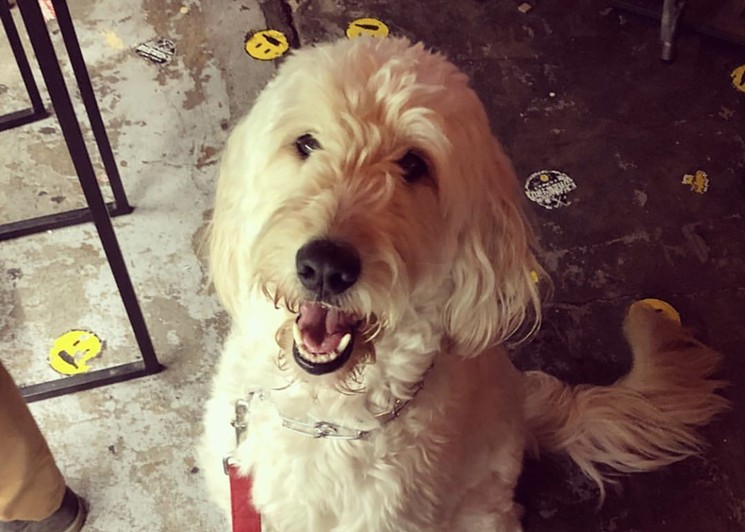 I mean, if you don't ride to Deep Ellum, you can at least take your dog. Joey's a fan.
Taylor Adams

2823 St. Louis St. (Deep Ellum)
There’s an entrance through large gates on the east side of the building here where you can walk your bike to the patio, which feels better than leaving it at the front, where you can’t see to the outside if you’re in the taproom. Deep Ellum has fantastic beer and wings, so stay awhile.

1311 S. Ervay St. (the Cedars)
Holt says many Critical Mass monthly bike rides end here because it has the space and outdoor seating. The staff’s fun, and there is plenty of room. Plus, we should really take up any opportunity to go to the Cedars.

7331 Gaston Ave., Suite 100 (White Rock)
This one’s right off the Santa Fe Trail and leads to White Rock Lake. The food might not knock your socks off, but it’s geographically convenient and does serve beer. 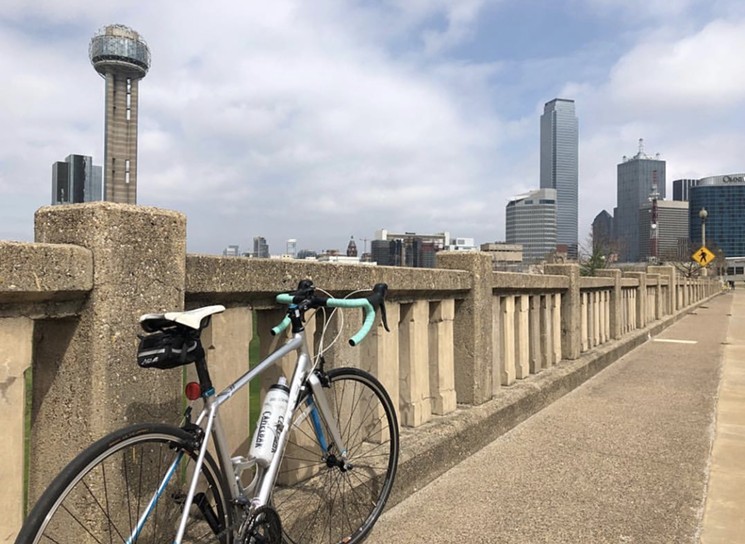 The weather's now making it hard to stay off our bikes.
Taylor Adams

Critic Brian Reinhart, who doesn’t ride bikes but does drink beer, let me know about a monthly bike ride along the Trinity River (surely touching on the Trinity Strand Trail some). There’s an April 11 6-Pack trail, bike cruise and craft beer event I will surely sign up for. That one stops at Steam Theory Brewing Co., Manhattan Project Beer Co., Bishop Cidercade, Pegasus City Brewery, Peticolas Brewing Company, Taco Stop, Bowlounge and Community Beer Co. before ending back at Steam Theory. Yeah, it’s basically all day from 11 a.m. to 5:30 p.m. Go with friends you like.
KEEP THE DALLAS OBSERVER FREE... Since we started the Dallas Observer, it has been defined as the free, independent voice of Dallas, and we'd like to keep it that way. With local media under siege, it's more important than ever for us to rally support behind funding our local journalism. You can help by participating in our "I Support" program, allowing us to keep offering readers access to our incisive coverage of local news, food and culture with no paywalls.
Make a one-time donation today for as little as $1.