The Power of the Pop-Up: These Dallas Chefs Are Ditching Rent and Going Mobile We see it all the time: Trendy restaurants backed by such-and-such prestigious company, closed sooner than expected. And that’s just one of the reasons so many chefs are bypassing the traditional brick-and-mortar to home in on the pop-up concept. Rent per square foot is increasing in Dallas, and restaurants are struggling to keep staffed.

These local chefs are bypassing the traditional restaurant model altogether by focusing on pop-ups and events. Patrick's son is his occasional sous chef for local pop-ups.
courtesy Shane Reitzammer/CinemaStory
Ken Patrick
Chef Ken Patrick, a Beaumont native, specializes in barbecue, spice rubs and other Southern fare. While it’s common for Patrick to host cooking demos, he’s also taking advantage of the new eyes and stomachs the pop-up scene brings to his brand. We caught up with him in September at a pop-up at Local Oak in the Bishop Arts District, where he showcased his brisket sliders and shrimp and grits.

“The more people that eat my food, the better," he says. "We can be at a gas station. I’ll set up a grill wherever.

"When I moved to Dallas back in ’07, nobody knew who I was," Patrick says. "I was still working in health care. I would get off work and do a demo here, cater there, very small scale. Besides being featured on the Food Network, what really put me on the map was local events.”

Fast forward to today, and Patrick is still holding it down on the grill with the help of his right-hand man — his son.

Chef Joshua Harmon's last brick-and-mortar restaurant was Junction Craft Kitchen in Deep Ellum.
Kathy Tran
Joshua Harmon's Party Basement
Freedom — that’s one of the things Joshua Harmon has, and is relishing in, after leaving Junction Craft Kitchen several months ago, just before it closed. It prompted him to start the pop-up series Party Basement, which allows him to experiment and attracts diners who relish eating uncommon dishes. Harmon is known for thinking outside the box and says this style of cooking and presenting is "like one big test kitchen.” courtesy Black Spadez Media
Kevin Ashade's Hangover Brunch
When he’s not tending to private clients or acting as the host chef at large-scale events like Dîner en Blanc, chef Kevin Ashade (aka Chef Kev) is hosting the Hangover Day Party, which brings people out to a Deep Ellum rooftop to party. But in an effort to get back to what he knows best, he recently created the Hangover Brunch, a series that includes all-you-can-eat food, bottomless mimosas, live music and a DJ. The first brunch took place the weekend of Cinco de Mayo, and you can expect another one this summer. 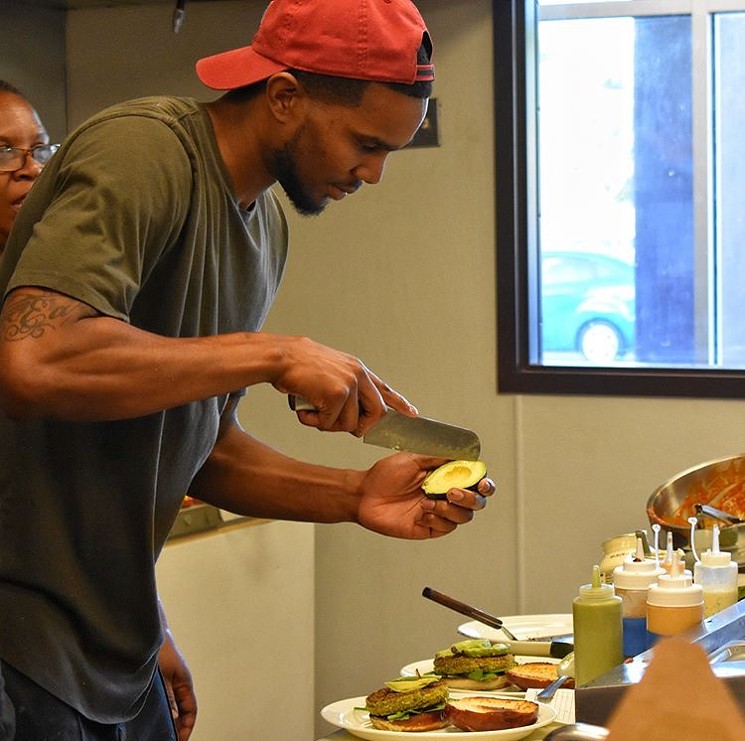 Chef Brandon Waller is known for his vegan pop-ups.
Dalila Thomas
Brandon Waller, Bam’s Vegan
The vegan food scene is growing in Dallas, and one man bringing a fresh approach to the lifestyle is Brandon Waller of Bam’s Vegan. After making the dietary change, Waller began experimenting and posting his vegan dishes to Instagram. That led to the start of his website, Bam’s Vegan, which features a slew of recipes and YouTube vids. Now, he’s bringing the food to the people with vegan friendly pop-ups using the mantra, “Your body is a temple, not a graveyard.” 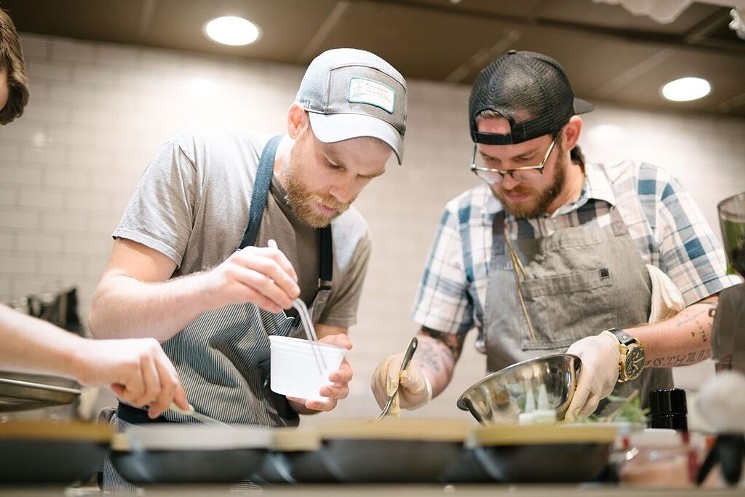 Jeremy Hess and Josh Farrell of Nameless Chefs.
courtesy of Nameless Chefs
Nameless Chefs
This fluid, ever-changing collective of Dallas chefs draws from some of the city's hottest kitchens, where the chefs pay their dues in the shadows but gather for pop-ups that let them stretch their legs. The group is made up of around 10 members ranging from industry newbies to chefs who have worked the line in Michelin-starred restaurants, and it has one goal: serve great meals in unique environments.

KEEP THE DALLAS OBSERVER FREE... Since we started the Dallas Observer, it has been defined as the free, independent voice of Dallas, and we'd like to keep it that way. With local media under siege, it's more important than ever for us to rally support behind funding our local journalism. You can help by participating in our "I Support" program, allowing us to keep offering readers access to our incisive coverage of local news, food and culture with no paywalls.
Make a one-time donation today for as little as $1.
Dalila Thomas
Contact: Dalila Thomas