Review: An Oak Cliff Barbecue Joint Where the Stars are Ribs and Rhythm 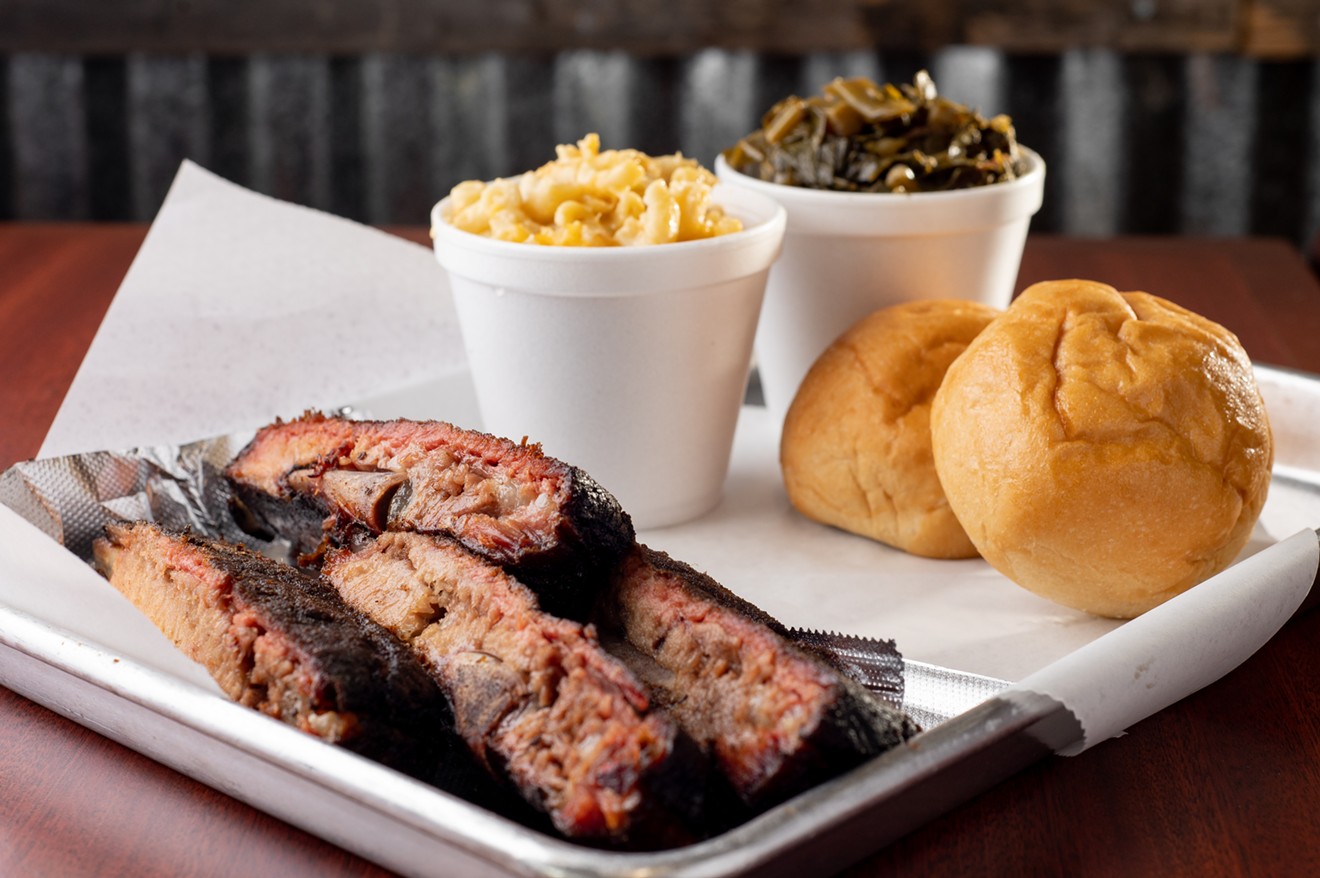 Kissed with hickory smoke and a dry rub, D Jackson's ribs are fall-off-the-bone tender. Alison McClean
On an ordinary day, in an ordinary world, someone would probably be singing at D Jackson BBQ right now.

Music flows through this shoebox-sized dining room and kitchen in the southwestern reaches of Oak Cliff just off Cockrell Hill Road. Alongside a few small tables and a painting of the spot’s logo — a jacked, tattooed pig wearing sunglasses — owner Dennis Jackson found room to add a tiny musical stage.

Before the coronavirus arrived in Dallas, a chalkboard proudly proclaimed one of the restaurant’s specials: Anybody who does karaoke gets a discount on their bill.

“The way I have it set up is the way I grew up,” Jackson says. “We would be at my house, we would be playing guitars and barbecuing, sitting around and having a good time.” 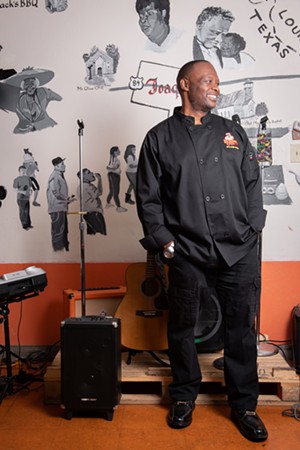 Dennis Jackson plays bass and tries to find time for a jam session when he can, even at the restaurant.
Alison McClean
Jackson, a left-handed bass guitarist, has played in bands, at church and with his family; most of his siblings are musicians, too. He grew up in the tiny town of Joaquin, Texas, just 4 miles from the Louisiana border, surrounded by talented barbecue smokers who cooked from scratch.

“There are no shortcuts down in the country,” he says. “My next-door neighbor was a barbecue place, just down the street was a barbecue place from when I was 8 years old. Weekends and holidays, Grandfather and Dad, they used to barbecue. My uncle barbecued all the time.”

I’m a little worried that some folks will see this headline, stop reading, jump in the car and drive across town expecting Jackson’s meats to be just like Pecan Lodge or Hutchins Barbeque. This ain’t that. The barbecue in Joaquin isn’t the unsauced, pepper-crusted briskets some Dallasites are used to; the smoke, sauce, sides and specialties are different.

The biggest draws at D Jackson BBQ are ribs and hospitality. Jackson’s pork ribs are just about perfect ($13.50 for a plate with two sides or a half rack by itself). They’ve been smoked long enough to have a deep ring of rosy, blushing pink. Most of the time, tender meat slides up from the bone with a gentle tug of my teeth; just once, my takeout container yielded up a rib off which the meat had already fallen.

The smoke on the meat is obvious, but it’s a milder, softer flavor than the harsher, more intense smoke at many other spots. Jackson says he uses hardwood for heat and hickory for flavor; a friend from East Texas delivers loads of hickory for him.

“Hickory is mellow, but it’s strong, so you can’t use too much,” Jackson says. “It’s kind of like seasoning your meat with smoke.”

There’s a dry spice rub, too, and it’s good enough that these ribs don’t need sauce — a compliment for many Texans — but Jackson’s sauce is so good that I wouldn’t resist too long. It’s sweet, sour and spicy, built on a tomato ketchup base but with so many seasonings that the tomato hides somewhere in the back. It’s sweet, but it’s not.

I like the hot links, too; they come pre-chopped and pre-sauced, and the sauce adds its extra kick to already-flavorful sausage. (A two-meat plate is $13.25.) Central Texas brisket snobs who revere the slices at, say, Franklin’s will have to adapt to a new style here; try the brisket on a potato or in a satisfying chopped beef sandwich ($10.25 with two sides). The small dining room at D Jackson BBQ
Alison McClean
On the side, there are classical baked beans, chopped green cabbage with slivers of brisket tucked up in the leaves, a multicolored mac and cheese, fresh-stewed collard greens, and rather limp green beans. The southern-style potato salad has a whole lot of mayo. My favorites are beans and macaroni.

Originally I meant to review D Jackson BBQ last summer in the early months of the pandemic. But then, on my final visit, the doors were closed and a handwritten sign explained that the kitchen would reopen the following week. It didn’t. As the pandemic progressed, Jackson kept limited hours until returning to action in early 2021.

“During the pandemic, it was dead in the water,” he says now. “We took time off and opened up only during the weekends.” Slowly, Jackson added days back to his schedule and refurbished a 1980s van which now acts as a mobile catering truck. This spring, business for both the truck and the restaurant is finally picking back up, and the dining room is finally back open normal hours.

Taking time off made sense, given that Jackson spends almost every minute at his restaurant. Every day, he cooks a new batch of sauce, prepares the sides and tends the meat. His smoker is out back right alongside the busy traffic of Illinois Avenue, so passing motorists can smell it. I recently drove past and saw smoke puffing out before 9 a.m. on a Monday. D Jackson BBQ isn’t open on Mondays.

D Jackson's recently refurbished 1980s catering van.
Alison McClean
Now the pandemic is subsiding, vaccines are widely available and music is returning to this dining room. Jackson says he’s hoping the karaoke discount comes back soon, and he wants to put together a house band, too. Already, some of his musical regulars are returning for informal instrumental jam sessions. On a recent weekday, I visited shortly after a regular customer-musician.

“We played today for while about lunchtime,” Jackson recounted afterward. “He plays left-handed like me. Guy said, ‘I got time for two songs. Let’s get ’em in.’”

D Jackson BBQ, 4444 W. Illinois Ave., #304. Open Tuesday and Wednesday 11:30 a.m.-7:30 p.m., Thursday 11 a.m.-7:30 p.m., Friday and Saturday 11 a.m.-9:30 p.m., Sunday 11 a.m.-6 p.m.
KEEP THE DALLAS OBSERVER FREE... Since we started the Dallas Observer, it has been defined as the free, independent voice of Dallas, and we'd like to keep it that way. With local media under siege, it's more important than ever for us to rally support behind funding our local journalism. You can help by participating in our "I Support" program, allowing us to keep offering readers access to our incisive coverage of local news, food and culture with no paywalls.
Make a one-time donation today for as little as $1.