With 1.29 billion active users, TikTok has become one of the world's most popular social media platforms. TikTok videos are influencing many aspects of our lives, from dance moves to pranks to exposure to international foods. The latter can be a good thing, especially when it comes to getting the kids to try something new. Such is the case with dango, a Japanese treat typically served at festivals but making big waves on TikTok. But finding dango in DFW? That’s another story.

Dango is a Japanese dumpling typically made with several types of rice flour and filled with a variety of fillings such as red bean paste. It comes in a range of colors depending on the type of dango and the occasion. It can be sweet or savory, but most online recipes are for the sweet hanami dango, which was the variety trending on TikTok. Hanami dango is popular during holidays or celebrations, like the Cherry Blossom Festival, which may or may not be why it’s so difficult to locate during the rest of the year. More on that later.

The quest for dango began as many great searches begin: on Google. But, that search wasn't very fruitful. Turns out the actual dumpling is pretty hard to find. Many stores may have carried them in the past but don't have them now. Treks to numerous Asian grocery stores in the suburbs came up dry, as did calls to Japanese restaurants, most of which serve mochi, which while not dissimilar to dango, isn't dango.

Happily, the search ended at Sushi Robata on Frankford Road in Dallas. This small Japanese restaurant sits in a strip mall next to a few vacant storefronts and almost looks closed until you get up close. Sushi Robata only serves the variety of dango known as sasa dango, a rice cake with red bean filling.

Unwrapped, the gummy rice shell picks up the veining and flavor from the sasa leaf.
Taylor Girardi
The presentation of the sasa dango is impressive. The dango comes wrapped in a sasa leaf (a broadleaf bamboo) for preservation and tied in a grass string, which you remove before eating, revealing a green pod that is the same color as the sasa leaf. Because of the gummy nature of the rice shell, the dango takes on the veining of the leaf, making it look like a cocoon of sorts. 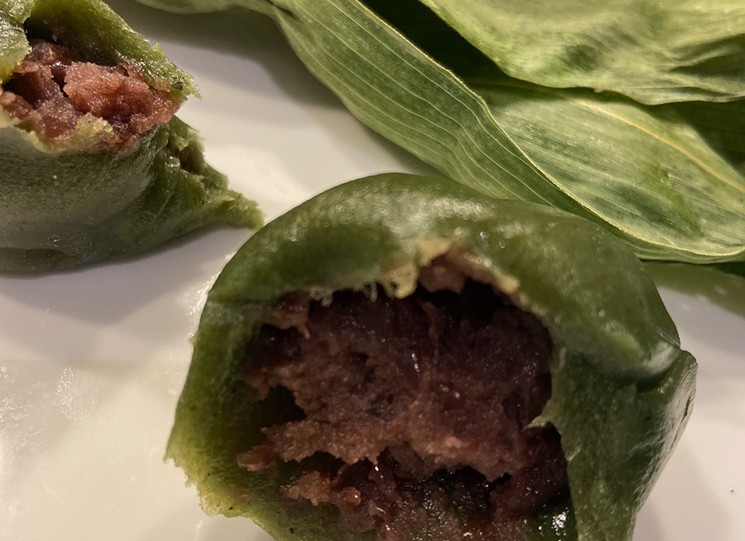 
If you like mochi or tong yuen, give dango a try. Though sasa dango does not come in the variety of flavors that mochi comes in, it is a mildly sweet treat to finish off your meal at Sushi Robata. You can even get in the TikTok spirit and make your own video trying your dango and see if you can go viral.
KEEP THE DALLAS OBSERVER FREE... Since we started the Dallas Observer, it has been defined as the free, independent voice of Dallas, and we'd like to keep it that way. With local media under siege, it's more important than ever for us to rally support behind funding our local journalism. You can help by participating in our "I Support" program, allowing us to keep offering readers access to our incisive coverage of local news, food and culture with no paywalls.
Make a one-time donation today for as little as $1.