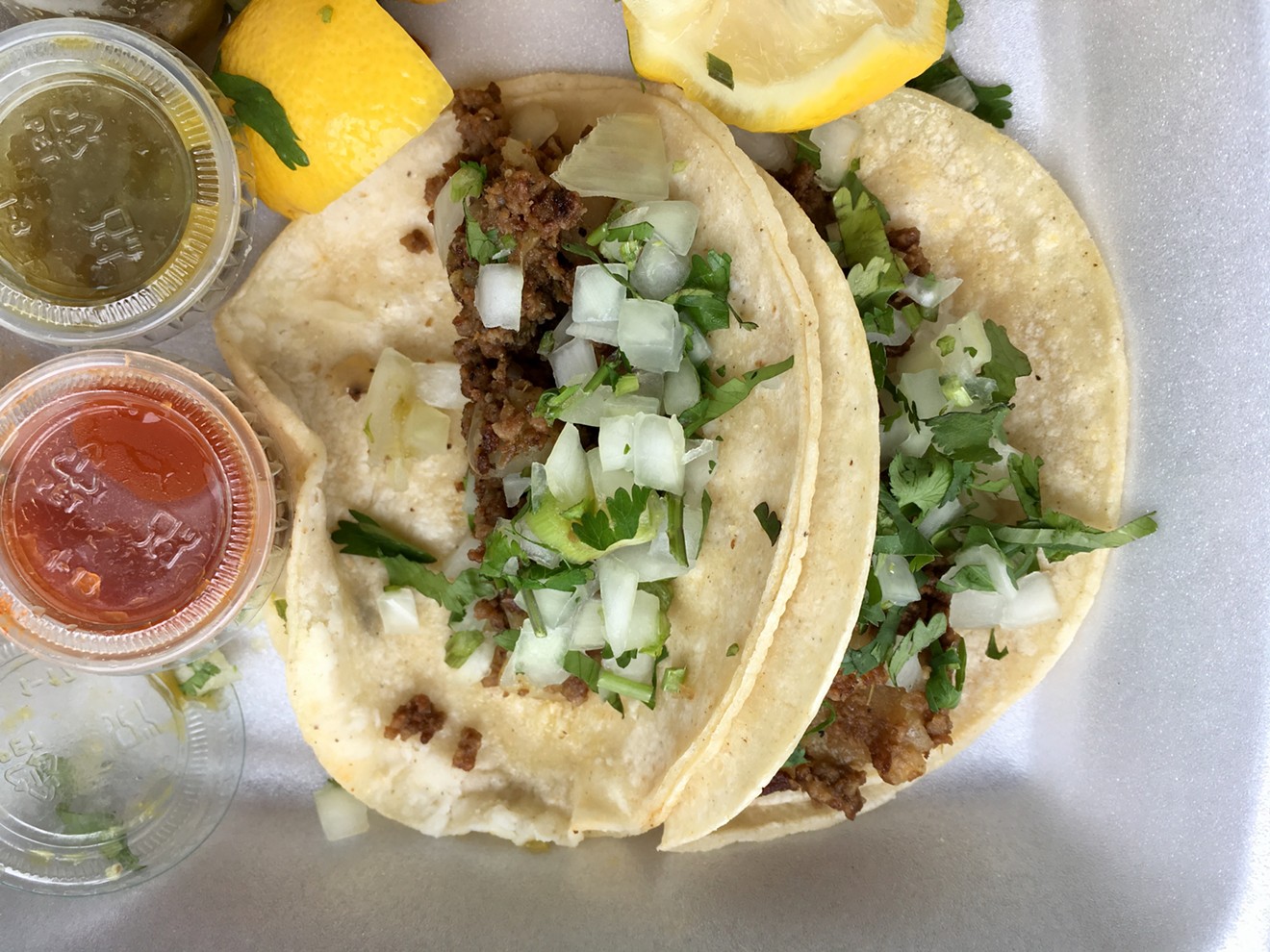 Fuel City's taco window is open 24 hours, and each taco is less than two bucks. Nick Rallo
The inflatable longhorn ripples in a punchy breeze. Cars swerve into the lot, gassed up for tacos, and music blisters over the loud speaker at the to-go window. The line doesn’t last long: Styrofoam-enclosed orders fly out of the tiny Fuel City window for $1.62 a taco, cash only.

Two containers of tacos — two picadillo, two pastor, two barbacoa, two chicken with cilantro, onions and salsa on the side — sit in my lap. It's a sample of each taco, aside from the breakfast options. On a rainy and windy day, eating in the car is the best way to chow down at Dallas' most famous gas station.


In every taco, the meat is desert skeleton-dry. It's depressing as hell.

The tacos, on the other hand, are light years away from the best. They are barely satisfying as a meal. One bite of barbacoa and grease floods your senses. Salsa, green or red, disappears like a toy boat in a deluge of oil. The beef fajita taco is the least appetizing, the cubes of beef desiccated like a baseball glove that was shoved into a shredder.

In 2006, Texas Monthly published a feature on the "Greatest tacos ever sold." Leading off the crisply written piece was the picadillo taco at our own Fuel City, the 24-hour gas station with round-the-clock food, including burritos and quesadillas for the cocktail-enabled. An excerpt from the piece:

When friends carry on endlessly about driving at all hours of the day or night to eat at a combination convenience store, drive-through beer shop and truck stop, we pay attention. Good thing, too, because the tacos at this joint are simply out of this world.


The gas station has been open since 1999, founded by John Benda, opening right before technology was supposed to cripple the world in an apocalypse that never happened. Fuel City was, and is, a place to grab gas and snap a few photos of the longhorns and donkeys, or the occasional camel, that graze out back, for some reason.

“That’s important. We can’t forget that,” Ralat says. “They’re drunk tacos, and that’s OK. But I’m not going to go there for lunch. I don’t want to ever eat there again.” 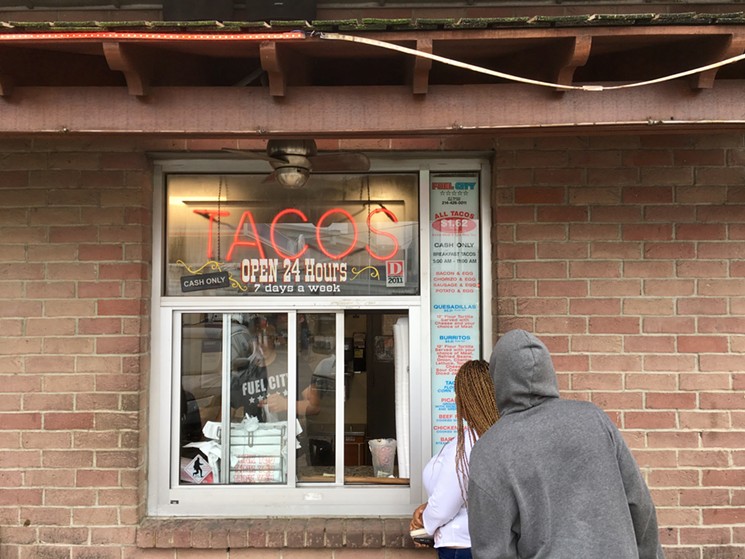 The ordering window is open 24 hours at Fuel City.
Nick Rallo
Sitting with a lap full of pastor, barbacoa, chicken and the jerky-like fajitas, I’m feeling a gravity-drop feeling, like an elevator that sinks a couple of floors too quickly, in my chest: In every taco, the meat is desert skeleton-dry. It's depressing as hell. After years of pastor tacos that could change your life (like the shaved trompo with fresh pineapple or the taco de Jose at El Come Taco), Fuel City's dry beef is a paper cut to the soul. No salsa on Earth can mask a gross failure of fire.

Fuel City's chicken taco is paper wrapped in cardboard. The barbacoa has some light at the end of the tunnel, but it’s a greasy light. The pastor tastes hollow. The tortillas have tough, ridged edges, like the kind you screw up in the microwave at home under a self-made salad of paper towels. The tortillas feel and taste as flavorless; the best ones should put the bright image of corn in your mind.

There’s a deeper problem with Fuel City. The food operation feels like a two-dimension facade of "authenticity," as though “authentic tacos” directly translates into “hole in the wall." 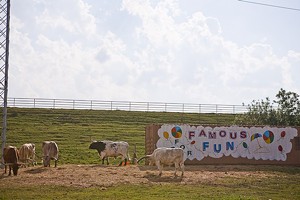 Fuel City's kitsch — including its livestock — have always been a draw. The tacos, however, are not.
Sara Kerens

For nearly two decades, Fuel City’s tacos have been fast, available and inexpensive. If they’re so rough, why are hordes of Dallasites swinging in and out to eat them? Is it the facade of a gas station or the genuine swiftness and reliability of eating here any time of day or night? For the price, it may be the genre of food that requires suspension of disbelief.

Still, it’s a tough surrender to swallow: A hop-skip away, you’ll find similarly inexpensive, lightning-sharp tacos executed with precision. In East Dallas, La Banqueta and El Come Taco both serve punch-a-longhorn good tacos for around three bucks. Oak Cliff has beauties that don't require much than a $20 bill from the ATM. In this golden age of food, simple shouldn’t mean sacrificing quality.

“It doesn’t take much more," Ralat says. "Just a few notches up and they’re great. Cool & Hot, when it was around, wasn’t a lot better — but man, I’d go eat there.

The meal happened in less time than it takes some Starbucks to blend a Frappuccino. That's the ultimate point: A quick meal is the only box to check off at Fuel City.