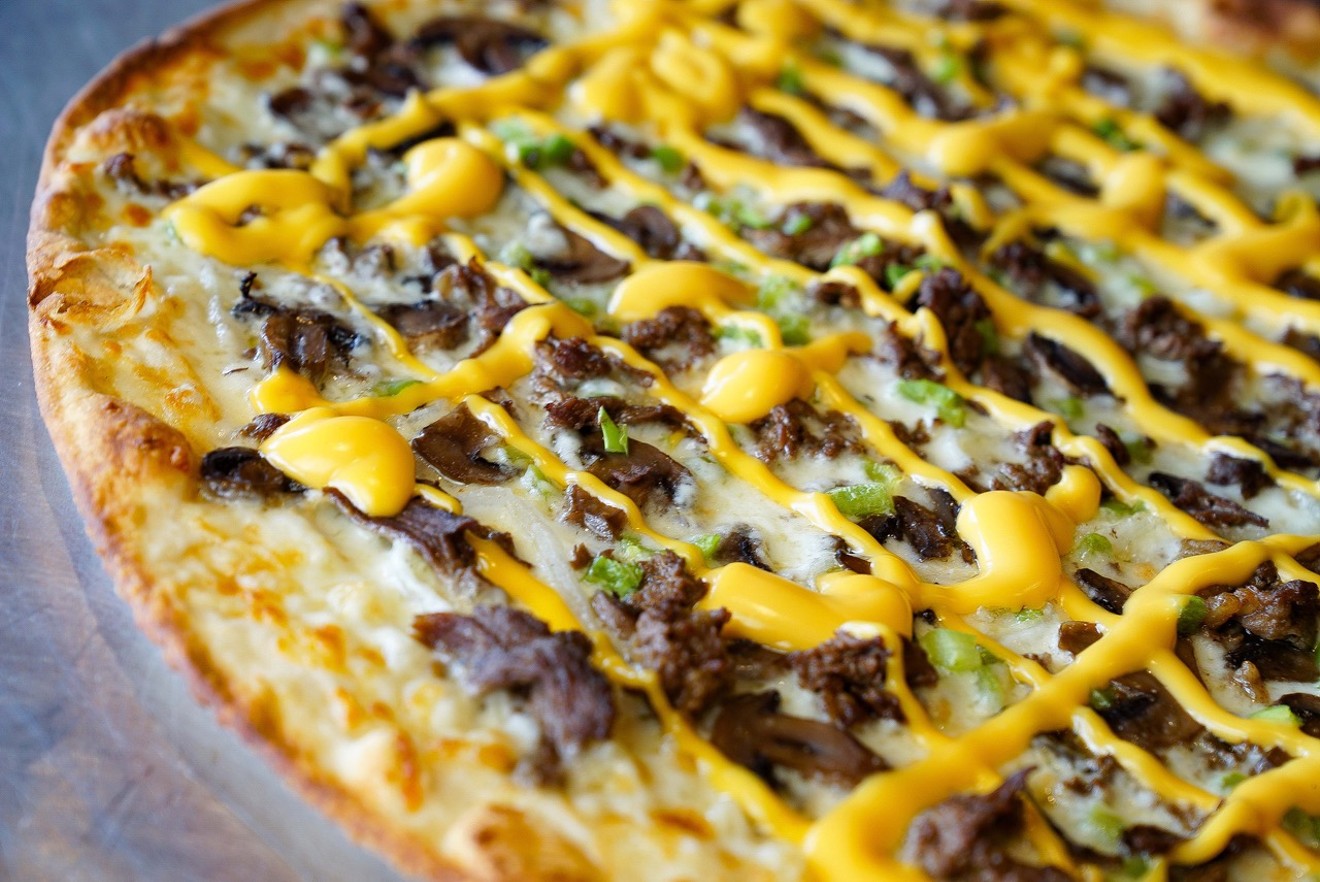 Shaved steak, onions, bell peppers, mushrooms and, yes, Cheez Whiz topped the Truck Yard collaboration pizza special at GAPCo. courtesy GAPCo
The first time I heard the song, I was in a wash of red lights.

Traffic stacked up Buckner Boulevard for a couple of miles at the Garland Road intersection — typical for a Friday evening — and a text message from my wife blinked on my phone: “Should we just order a pizza tonight?”

It’s psychologically impossible to answer this question with “no,” and traffic was eating at my brain like water to cotton candy. Immediately, I got Greenville Avenue Pizza Company — their location on Peavy Road is busy on weekends but not rage-spiral-busy — on the phone. Honestly, it’s something I hadn’t done in a while, order a pizza over the phone in real time (I usually use Caviar), and it made me nostalgic. Remember the joy of saying “pepperoni pizza” over the phone to a human being?

I’m a rabid sucker for the Pizza Company’s sausage-and-red-onion pie with an extra crispy crust. I want their slice to shatter down the center when I begin the fold-to-mouth process. The GAPCo worker — Pizza Slayers, they’re called — picked up the phone, and it sounded like a cavalcade was marching through. “No problem,” I said, at the idea of being on hold in traffic for another minute. That’s when it happened:

That’s when “Pizza Man” jumped out of the speakers. Let’s talk about how good the “Pizza Man” is at being “hold music.” It’s startling. My phone blasted the melody — a catchy, rolling head-bobbing thing. The singer hitting the letters “G-A-P-Co-yo” in beat sounded so richly produced that, for a split second, I thought I had accidentally flipped over to the radio. It was a busy night, so the entire song played. It marks the first time in the history of ordering pizza over the phone that I didn’t care how long the wait was — this song slaps.


Sammy Mandell beams about East Dallas. His pizza boxes are all printed with the effusive “East Dallas born” slogan. He’s a graduate of Bryan Adams High School, which is where he met the Pizza Man. That's the recorder of the song “Pizza Man,” to be clear, who must remain a mystery because of contractual obligations.

Midway into 2016, Mandell was ready for a theme song. His pizza joint on Greenville Avenue needed a rally cry, a song he could pin to his social media and make people excited.

“I really want some sort of anthem,” Mandell remembers thinking, “something to make the staff proud to be here.”

He emailed a friend of his from Bryan Adams who had achieved some major things in music. It was as simple as asking, Mandell says, and he forwarded his music buddy some key words to get things going. A month or so later, his friend nailed it in one attempt.

He added it to the store soundtrack on Greenville, watching folks bob their heads in unison when it hit the speakers. At the Peavy joint, the hold system for his phones got the song. Now, it’s available on Spotify and Amazon.

Greenville Avenue Pizza Company, 1923 Greenville Ave. (Lowest Greenville) and 1145 Peavy Road (East Dallas)
KEEP THE DALLAS OBSERVER FREE... Since we started the Dallas Observer, it has been defined as the free, independent voice of Dallas, and we'd like to keep it that way. With local media under siege, it's more important than ever for us to rally support behind funding our local journalism. You can help by participating in our "I Support" program, allowing us to keep offering readers access to our incisive coverage of local news, food and culture with no paywalls.
Make a one-time donation today for as little as $1.
Nick Rallo
Contact: Nick Rallo