More chicken and waffles landed in Deep Ellum. Waffles can be added to any order for $3. A. Carolyn Studio
After some testing and teasing pop-ups in various locations around Dallas in November, the popular Nashville hot chicken chain Hattie B’s has finally opened its doors in Deep Ellum.

This is Hattie B’s first location in Dallas, and if you’re unfamiliar with the menu, think about it like this: Hot chicken is to Nashville what steakhouses are to Dallas. It’s a crowded market, but only a few do it the best. One of those is Hattie B’s.

The menu is simple: either tenders or bone-in chicken pieces, always atop white bread and with pickles. Customers can add two Belgian waffles served with maple syrup to any order for $3. The spice level here runs from Southern (no heat) to “Shut the Cluck Up." The location also comes with boozy options with local beer on tap or wine if you’re feeling a bit fancy.

We were invited to Hattie B’s opening party where we tried the food and also got to chat with the founders, a father, and son, both named Nick Bishop. It was a casual affair, and the spot on Main Street had a fun vibe. They have a giant menu board reminiscent of an auto body repair shop. Hattie B’s is all about the experience and building community. The Bishops describe Deep Ellum as an eclectic neighborhood almost similar to Nashville, which made it the perfect location for their first Texas spot.

“It's always been about finding neighborhoods and communities that feel very much authentic to who they are and that feel very organic,” Bishop Jr., said. “The best thing that could happen is going into the neighborhood and having the best barbecue joint or the best noodle spot, so hopefully we're adding to that.” 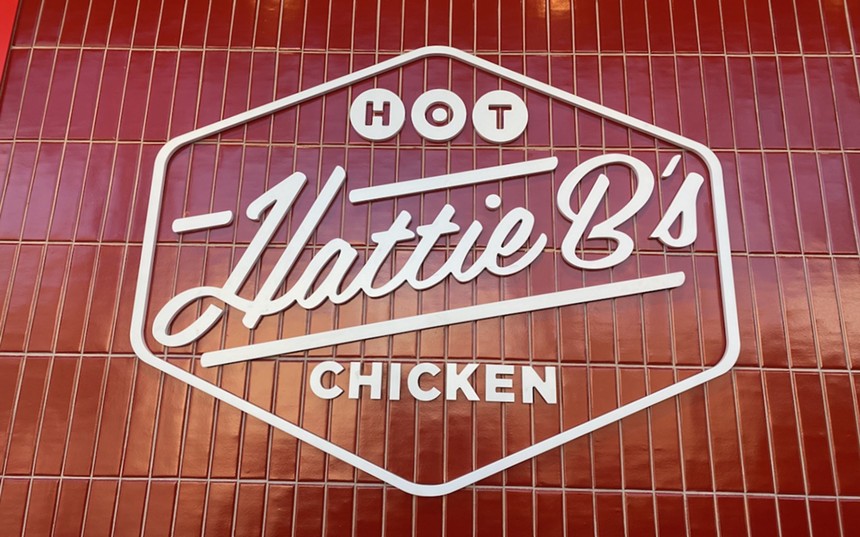 Hattie B's joins a recently crowded hot chicken scene in North Texas. We're not complaining though.
Lauren Drewes Daniels
We tried the chicken sandwich and chicken tenders at the mild and hot level with both packing some serious heat behind them. Even at the mild level, it's still hot chicken. The tenders were meaty and thick, so they’ll fill you up fast.

We also dug into some of their amazing sides because who goes to a chicken joint and doesn’t get sides? The fries were nothing special, but we recommend the pimento mac and cheese or the bacon and cheese grits if you’re ordering on Sunday.

Go easy on the heat because we also recommend dessert, and singeing your taste buds could ruin the experience. Like everything else here, portions are generous. The banana pudding, a Southern classic, is dreamy. Ice cream is the logical choice for anyone having a meltdown.

The Bishops have big plans for Texas with another location in Houston as early as next year. “I think the whole idea was Dallas, Houston, they're huge cities where you could do multiple Hattie B’s, and it wouldn’t make a lot of sense to come to Texas to not do more,” Bishop Jr. says.

Hattie B's, 3000 Main St. (Deep Ellum), 11 a.m. - 10 p.m. Monday - Thursday; 11 a.m. - 11 p.m. Friday - Saturday; 11 a.m. - 4 p.m. Sunday
KEEP THE DALLAS OBSERVER FREE... Since we started the Dallas Observer, it has been defined as the free, independent voice of Dallas, and we'd like to keep it that way. With local media under siege, it's more important than ever for us to rally support behind funding our local journalism. You can help by participating in our "I Support" program, allowing us to keep offering readers access to our incisive coverage of local news, food and culture with no paywalls.
Make a one-time donation today for as little as $1.