Back to bed sandwich - two eggs over easy, ham, sausage, bacon and cheddar cheese drizzled with maple syrup and served on French toast as the bun Hank Vaughn
Honey Berry Café was founded outside Chicago in 2019 by Matt Ahmeti and has seven locations, with five in Chicagoland, two in Milwaukee and now one in North Dallas.

They have a typical brunch menu and hours of operation to match, opening early and closing early. They offer up crepes, waffles, various takes on the Benedict (basic, corned beef, Florence, Southwestern, etc.), along with omelets, biscuits and gravy, breakfast sliders, country fried steak, and several different skillets such as veggie and corned beef.

Their pancakes are probably what put them on the map, and they offer several versions such as Key lime pie, chocolate chip peanut butter, Oreo s’mores and banana nut. Their signature pancake is called, conveniently enough, the Honeyberry, and is composed of berry mascarpone filling, fresh berries, vanilla crème anglaise and blackberry coulis, and is really good but saying it was sweet would be an understatement.
click to enlarge This Chicagoland transplant restaurant offers up a bevy of brunch options.
Hank Vaughn
On this visit, we decided on a breakfast sandwich and an omelet, both of which come with a choice of hash browns or fruit, and toast or pancakes. If you opt for pancakes over toast, you can choose the signature Honeyberry pancake for a small upcharge.

But we’re getting ahead of ourselves. First, there are beverages to be had. The Brunch Punch consisted of Skyy vodka, Champagne, pineapple juice, fresh-squeezed orange juice, Sprite and Honeyberry signature fruit puree for $10. The regular coffee comes with a complete pot that sits on your table, which we love, but more important, it comes with its own little spoon to stir the cream. A small detail, but it doesn’t take much to make us happy.
click to enlarge 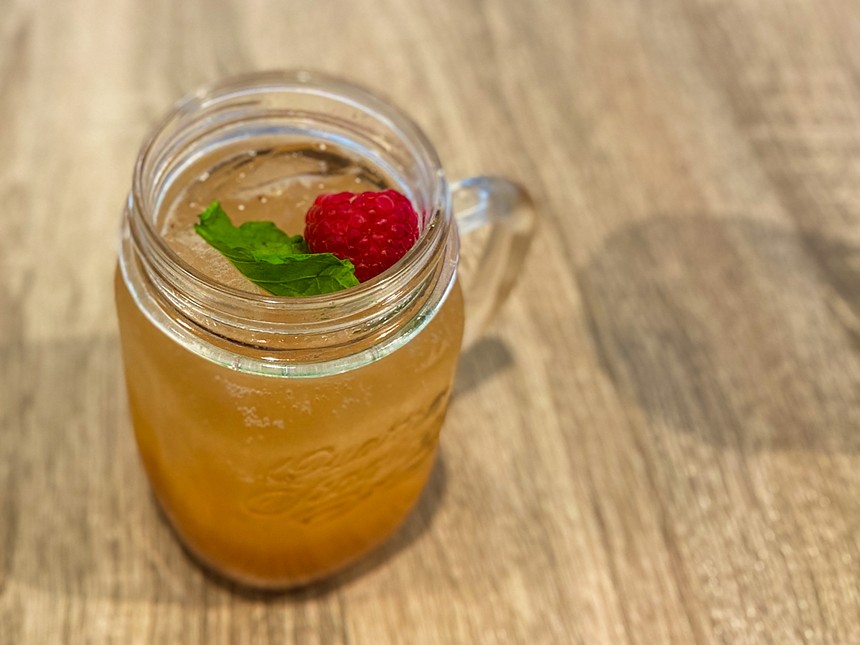 Brunch Punch: Skyy vodka, champagne, pineapple juice, fresh-squeezed orange juice, Sprite and Honeyberry's signature fruit puree
Hank Vaughn
Back to the mains. The Back to Bed sandwich consists of two eggs over easy, ham, sausage, bacon and cheddar cheese, all drizzled with maple syrup and served on French toast for $15. For this, we selected hash browns and a pancake, because what if the French toast sandwich was not sweet enough? It could happen. (It didn’t.) We were left with half the sandwich for later.
click to enlarge 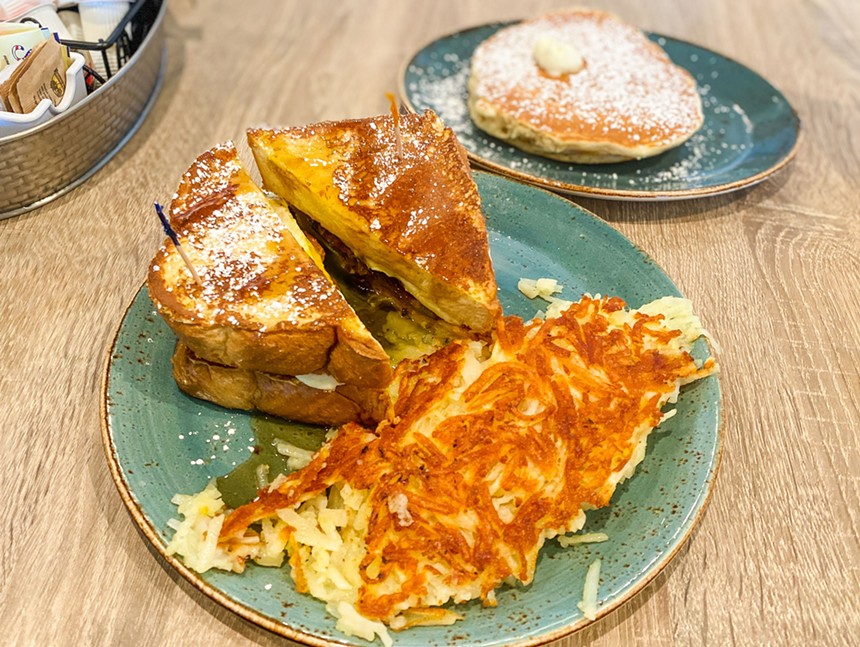 Back to bed sandwich - two eggs over easy, ham, sausage, bacon and cheddar cheese drizzled with maple syrup and served on French toast as the bun
Hank Vaughn
The wild mushroom omelet was prepared with provolone cheese, prosciutto ham, herb-roasted cremini, oyster and shiitake mushrooms and will also set you back $15. This was OK, but if there were mushrooms other than cremini, they were few and far between, or simply eaten up with the rest and not noticed. Not a big deal, but the variety of mushrooms promised was part of the draw. The ham was of the diced variety, which is not traditionally how one sees prosciutto, but who knows. The cheese was definitely provolone, so there’s that.
click to enlarge 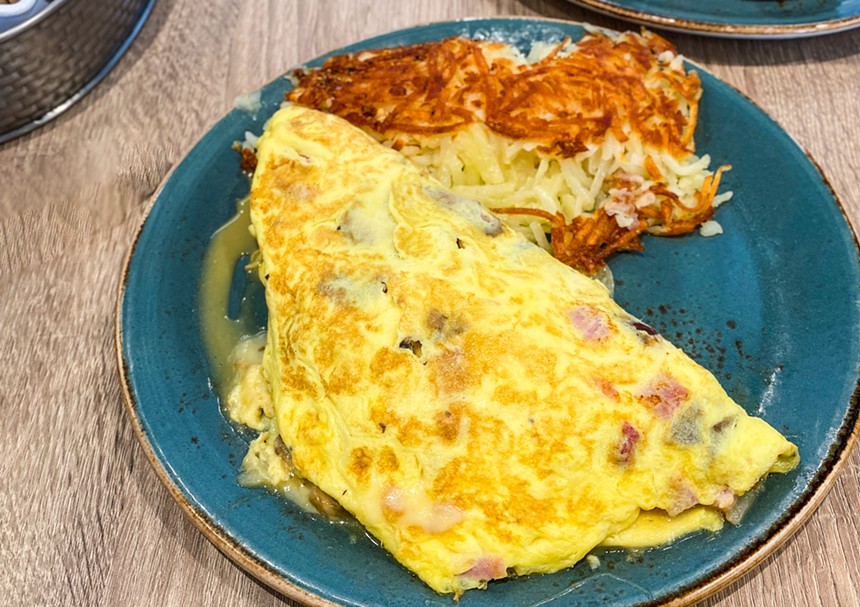 Wild Mushroom omelet - provolone cheese, prosciutto, and herb roasted mushrooms
Hank Vaughn
All in all, a successful outing, and this place is almost always busy, so come early or be prepared to wait a bit, but at the end of the day (around 3 p.m. here) the friendly staff and good food should make it well worth it.

Honey Berry 4520 Frankford Road (Dallas) 7 a.m. - 2:30 p.m. Monday - Friday 7 a.m. - 3 p.m. Saturday & Sunday
KEEP THE DALLAS OBSERVER FREE... Since we started the Dallas Observer, it has been defined as the free, independent voice of Dallas, and we'd like to keep it that way. With local media under siege, it's more important than ever for us to rally support behind funding our local journalism. You can help by participating in our "I Support" program, allowing us to keep offering readers access to our incisive coverage of local news, food and culture with no paywalls.
Make a one-time donation today for as little as $1.