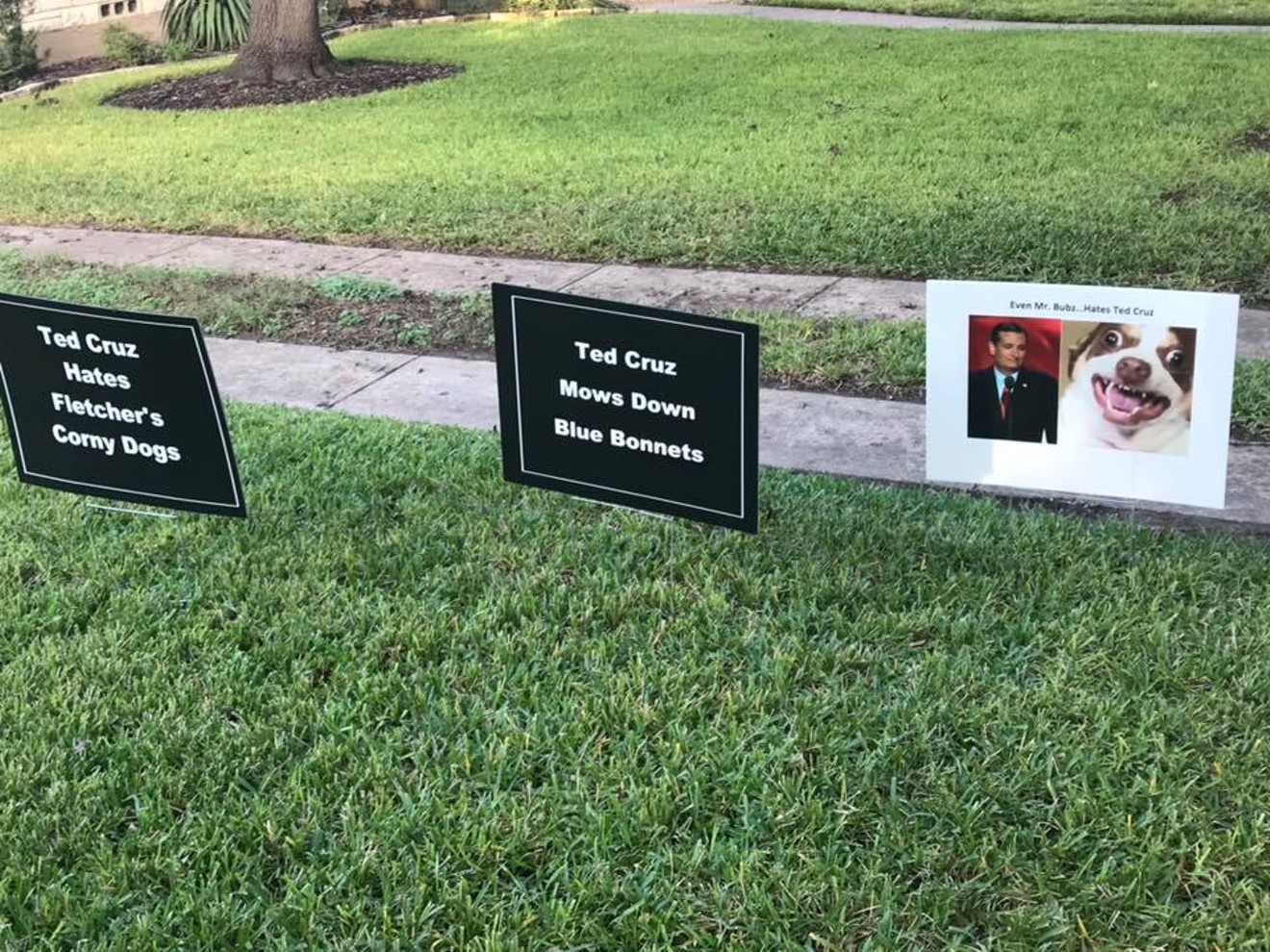 "Ted Cruz hates Fletcher's Corny Dogs" — Oak Cliff resident John Bradley spotted a few interesting yard signs in his Kessler Plaza neighborhood. courtesy John Bradley
Food and politics have always been intertwined. Many a pundit has opined about President Donald Trump's affinity for well-done steaks and McDonald's breakfast sandwiches. In the 2016 election, Bernie Sanders got his own flavor of Ben & Jerry's ice cream. From Obama eating dinner in Vietnam with Anthony Bourdain to Trump tweeting "Happy #CincoDeMayo!" with a photo of him eating a taco bowl, food and politics have become inextricably connected — and excessively over-analyzed. Dallas avocado enthusiast Liz Goulding created these bumper stickers in response to a 2013 interview wherein Ted Cruz admitted he "despises" avocados.
courtesy Liz Goulding
Here in Texas, the politicization of food goes a step further. In a state with very strong opinions about beans in chili, sauce on barbecue and whether or not crunchy-shelled tacos are, in fact, tacos, even the tiniest food-related misstep can become fodder for both sides.

In 2013, when Ted Cruz told The Des Moines Register that he "despises" avocados, former Dallas freelance journalist (and current podcaster) Liz Goulding proclaimed that Cruz was "no longer fit to serve Texas." She also created bumper stickers — "Ted Cruz: Wrong on avocados, wrong for America" — and even got together with friends, one of whom is a voice actor, to make a political attack ad referencing Cruz's disdain for the cornerstone of guacamole.

"So ask yourself — can a man's moral center exceed his palate?" the ad asks. "To what other important issues does Ted Cruz bring the same lack of clarity? What other good and right options cause Ted disgust?"

Obviously, food plays a huge role in humanizing candidates. Back when I was a full-time photojournalist in the swing state of Ohio, I covered the presidential campaign leading up to Barack Obama's first win in November 2008, and often, I photographed carefully staged photo ops at restaurants — like this image I took of Joe Biden ordering dinner at a Kewpee Burger in Lima, Ohio. Biden campaigned his way through most of the visit, to bored looks from the journalists around me, but their pens really started moving the minute he placed an order for a double Kewpee Burger.


In the Texas U.S. Senate race, food is front and center like never before. U.S. Rep. Beto O'Rourke frequently posts Facebook live videos of his Whataburger orders, and Cruz famously called him a "triple-meat Whataburger liberal." Beloved Austin director Richard Linklater then launched a series of attack ads, one of which mocks Cruz's affinity for White Castle. 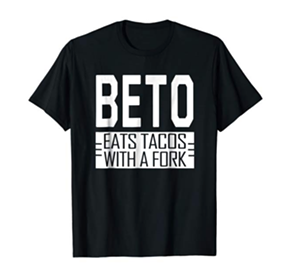 Does O'Rourke eat tacos with a fork? We haven't spotted any evidence of this, but you can nonetheless buy a shirt on Amazon that makes this assertion.
courtesy Amazon
If you spend any time at all on Facebook, you've likely spotted the "Beto eats tacos with a fork" memes, stickers and T-shirts, but if this references a particular event in the campaign, I have yet to find it — there's no news coverage addressing whether  O'Rourke has ever eaten tacos with a fork.

Another political Texas food rumor we are unable to confirm: Cruz's disdain for Fletcher's Corny Dogs, a claim made by a series of humorous yard signs recently spotted by Oak Cliff resident John Bradley, who photographed the signs during a walk in his Kessler Plaza neighborhood. 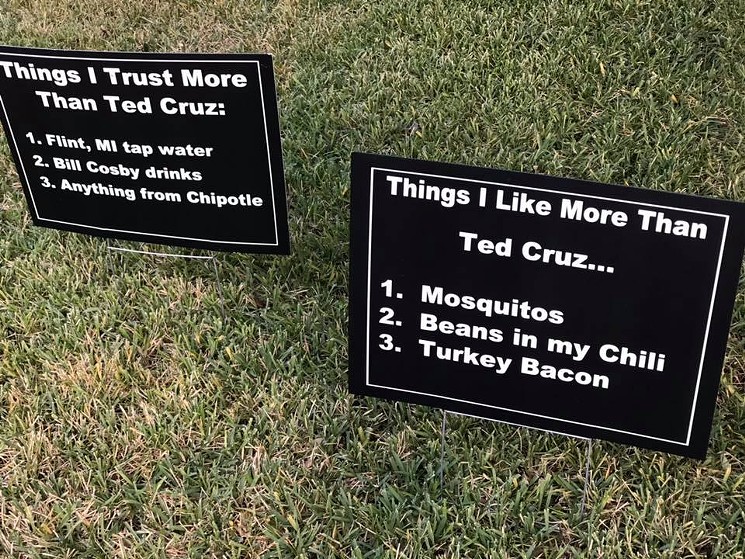 Oak Cliff resident John Bradley spotted these signs in a Kessler Plaza neighbor's front yard.
courtesy John Bradley
One of the signs lists "things I like more than Ted Cruz: 1. Oklahoma. 2. Pace Picante. 3. KC (Kansas City) BBQ." That thread continues on another sign listing things they like more than Cruz: warm beer, cold queso and unsweetened tea. Obviously, the signs are meant in jest — but they're also posted next to a Beto campaign sign that makes the humorous signs' intent pretty clear.

This Oak Cliff resident has some strong opinions about cold queso and unsweet tea.
courtesy John Bradley
In a Dallas subreddit thread about the signs, there were no arguments about Beto vs. Cruz or Republicans vs. Democrats. Instead, lengthy threads soon formed about whether or not beans belong in Texas chili. The debate became heated, with non-native Texans repeatedly asking why beans in chili is so egregious.

"It's a free country," user tmarkville wrote. "You can call it whatever you want. Just know that you're lying if you call it chili."
KEEP THE DALLAS OBSERVER FREE... Since we started the Dallas Observer, it has been defined as the free, independent voice of Dallas, and we'd like to keep it that way. With local media under siege, it's more important than ever for us to rally support behind funding our local journalism. You can help by participating in our "I Support" program, allowing us to keep offering readers access to our incisive coverage of local news, food and culture with no paywalls.
Make a one-time donation today for as little as $1.