The sleek, modern bar at the cavernous new Zaytinya at the Star in Frisco. Kathy Tran
Zaytinya, the new Turkish kitchen in Frisco from celebrity chef José Andrés, is the kind of restaurant where two tables can order completely different things and come away with vastly different opinions. A table that gets lucky will love their meal and tell all their friends; a table that guesses wrong will wonder why they spent so much money following the hype. 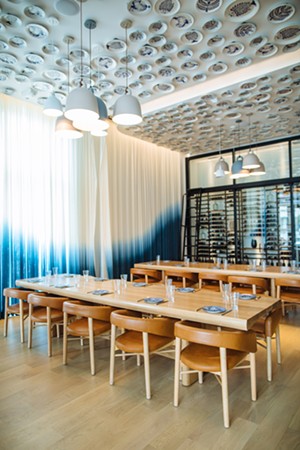 Zaytinya's interior.
Kathy Tran
Zaytinya is a cavernous restaurant, about the size of an airport hangar and, when full, as loud as front-row seats to an interstate highway. The design is gorgeous — all that blue ambient light, the genuine Turkish plates on every table and on the private dining room’s ceiling, the USB chargers under every bar seat — but certain practicalities were forgotten, including any kind of sound absorption and the fact that tables get so close together that walking across the main floor can feel like navigating a labyrinth.

Aside from the wood-fired grill on the back wall, Zaytinya feels more like Las Vegas than the Aegean Sea.

The lucky table might be sitting near that grill, feeling its blast of warmth, watching sparks float up around skewers of meat. They will be ordering dishes like soujouk pide ($10), a canoe-shaped flatbread topped with thick, spicy Turkish sausage and a runny egg yolk. They will enjoy the standout octopus meze with ultra-tender morsels of the meat cut into bite-sized pieces and scattered across a mellow canvas of yellow split-pea puree like an abstract seafood painting ($18).

Octopus meze, $18.
Kathy Tran
The unlucky table, meanwhile, will be suffering through a plate of gigantic, flavorless eggplant discs fried in an equally tasteless batter ($9.50). There is a reason that true Turkish chefs prefer smaller, less bitter eggplant. The unlucky table might also be wondering why the large bowl of olive oil next to the pita basket tastes curiously cheap, why the pita is a thin, airy balloon of starch and why the otherwise satisfying Adana kebab comes with an ugly beige smear of congealed fat on top of the meat ($10).

The lucky table will double down on vegetables, which are Zaytinya’s strength. One of the best dishes here is cauliflower roasted to perfection and plated with an impeccable sense of balance: a showering of chives, sesame seeds and spices; sultanas for sweetness; and tahini for creamy warmth ($9.50). Another instant classic is the Brussels sprouts plate, the vegetables roasted until they’re nearly ash and then topped with a garlic yogurt dressing ($9.50). One of Zaytinya's strongest dishes: roasted cauliflower with tahini.
Kathy Tran
The lucky table might partake in a lemony, vinegary salad of green and white asparagus, capped with a tzatziki made with raw white asparagus instead of cucumbers ($14).

Meanwhile, the unlucky table will be paying extra for a salad they didn’t order, as my table did when we ordered a $6 board of pastirma, the warmly spiced Turkish cured meat that is an ancestor of pastrami. It arrived at our table and on our bill as a $9 upcharged version with silly fruit salads on each piece of meat. The pastirma was good, but the spice rub around the meat’s edges had been trimmed off.

The lucky table’s meaty main course will be hunkar begendi ($15; the G is silent), cubes of slow-cooked lamb shank on a rich puree of torched eggplant and creamy Turkish cheese. It avoids the cloying sweetness of inferior versions at other Dallas restaurants. In fact, the only better hunkar begendi I’ve had is my grandmother’s. Hunkar begendi ($15), slow-cooked lamb shank on a puree of torched eggplant and Turkish cheese.
Kathy Tran
Which brings me to an important disclosure: I am half-Turkish, and I brought my Istanbul-born mother to Zaytinya for this review. Because Zaytinya serves many of our favorite foods on earth, and because Andrés is a good chef and a good human who spent months feeding thousands of people in storm-battered Puerto Rico, we had high expectations for the new Frisco restaurant.

In short, I was biased toward Zaytinya from the start. Maybe that is why I was disappointed.


Zaytinya feels more like Las Vegas than the Aegean Sea.

There is certainly a lot to praise here. The wine list is dedicated almost entirely to Greece, Turkey and Lebanon and includes background information on those countries’ wine regions and grapes. The interior, with its blue tile, open kitchen and evil-eye charms, is almost as beautiful as the food. Some of the innovations from Andrés and Frisco head chef Jon Thompson are clever, like toning down the raw fire of skordalia, the Greek garlic dip, to use it as a backdrop for excellent chickpea-fried oysters ($11).

But every positive has a corresponding negative. A few of the culinary inventions are head-scratchers, like the way Andrés and Thompson turn the delightful spinach pastry spanakopita into a chubby egg roll ($9.50). Zaytinya’s beautiful tilework keeps it infernally loud at peak hours. And if $9.50 for one egg roll seems like a high price, check out the wine list, starring intelligent selections at eye-popping markups.

Zaytinya isn't perfect, but they do vegetables — like this $9.50 roasted Brussels sprouts plate — well.
Kathy Tran
There are eight bottles of wine for sale at Zaytinya that are also available in the same vintages at the similarly themed Highland Park restaurant Sachet. On average, Sachet’s bottles are 28.5 percent cheaper than Zaytinya’s. Who says Frisco is more affordable than Highland Park?

Indeed, Sachet is a smaller, more intimate, more affordable, more consistent version of the same restaurant. It also has the advantage of being near central Dallas. Arguably, Frisco residents have good reason to travel south to try Sachet’s meze, family-style mains, and library of unusual gin and wine. Diners in Dallas, by contrast, should feel less urgency to trek north for the rival hot spot at The Star.

Zaytinya, 6655 Winning Drive, Suite 600, Frisco. 972-324-3060, zaytinya.com. Open 11 a.m. to 10 p.m. Sunday through Thursday and 11 a.m. to 11 p.m. Friday and Saturday.
KEEP THE DALLAS OBSERVER FREE... Since we started the Dallas Observer, it has been defined as the free, independent voice of Dallas, and we'd like to keep it that way. With local media under siege, it's more important than ever for us to rally support behind funding our local journalism. You can help by participating in our "I Support" program, allowing us to keep offering readers access to our incisive coverage of local news, food and culture with no paywalls.
Make a one-time donation today for as little as $1.