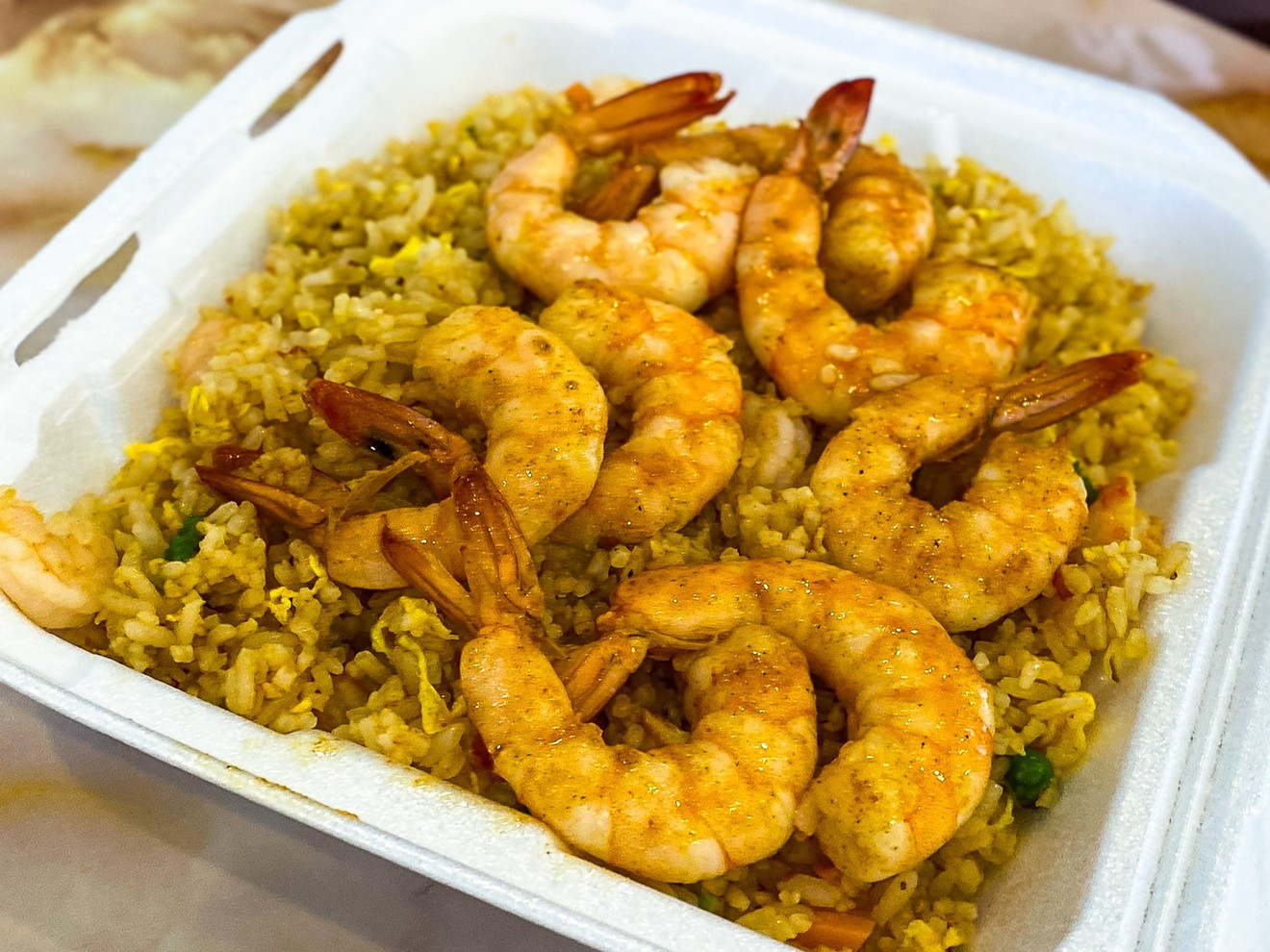 Cajun Fried Rice... a pile of fried rice with pieces of shrimp and crawfish, all topped with a slew of well-seasoned boiled shrimp. Hank Vaughn
Paradise Cajun Seafood in North Dallas offers a plethora of all things Cajun that can be fried or boiled, primarily of the seafood variety, so they’ve nailed the name. You won’t find etouffee or gumbo here, but there are fried and boiled shrimp, oysters, catfish, tilapia, snow and Dungeness crab, and crawfish when in season. You'll also find po'boys and fried rice, along with a kid’s menu with Kool-Aid as the included drink.

Accompanying all of these (but perhaps not the Kool-Aid) is a really good garlic Cajun sauce that is made in-house. We’ve been there a few times in an effort to get a decent representation of all that the menu has to offer. As veritable food scientists gathering data for a peer-reviewed journal, we are doing all we can to further the culinary knowledge of North Texas, because we’re givers that way. Here are our preliminary results.

Paradise fried shrimp: Cajun-seasoned fried rice with carrots and peas, with the lovely addition of bits and bites of shrimp and crawfish.
Hank Vaughn
We’re big fans of fried rice in all its forms and ethnic origins: from Thai fried rice to the generic fried rice one finds on a typical Chinese delivery menu, we love them all. Paradise Cajun Seafood offers several takes on this dish, but we particularly enjoyed the Paradise fried rice, which had the traditional carrots, peas and eggs but with the addition of pieces of shrimp and crawfish, all seasoned with Cajun spices. It has a slightly smoky flavor with just the right amount of kick.

The Cajun fried rice is Paradise fried rice enhanced by the addition of eight peeled and boiled shrimp, all spiced-up and plump sitting atop the rice. These shrimp were larger than expected, and they were wearing tails, which provided a good presentation as well as a handle with which to grab and devour the shrimp. This also came with a side of the garlic Cajun sauce, which added another layer of savory deliciousness.

Cajun Fried Rice... a pile of fried rice with pieces of shrimp and crawfish, all topped with a slew of well-seasoned boiled shrimp served with a side of garlic Cajun sauce.
Cindy Ju Vaughn
The po' boys are served on a good piece of bread that has enough body to provide a sturdy structure for the sandwich. We sampled the shrimp and the oyster versions, and both came dressed with tartar sauce that wasn’t laid on too thickly along with lettuce, tomatoes, a smattering of ketchup and pickles. Cajun-seasoned fries were included, and dunking them in the garlic sauce created a heavenly little treat.

Hard to go wrong with a good shrimp po-boy, and you won't at Paradise. Be sure to ask for a side of garlic Cajun sauce for those fries.
Hank Vaughn
Our final data point was the fried shrimp basket, which included around six larger-than-average, deep-fried butterflied shrimp, along with fries and hush puppies, all served with a side of cocktail sauce. Of course, that didn’t stop us from also making use, again, of the garlic Cajun sauce. We won’t be put in a sauce box. The shrimp themselves were tender and moist, not overcooked, the cornmeal breading cooked through but not scorched. We still need to try the catfish and oyster versions and combos of this basket, but science will have to wait for another day.

Who doesn't like a good deep-fried fish basket? Here's the shrimp offering, complete with fries and hushpuppies.
Hank Vaughn
Every time we’ve visited, we’ve been the only ones actually eating in the dining room. This appears to be primarily a take-out place; several people came for their orders each time we were there. The restaurant seems to do a pretty good business with take-outs to the extent that even when you dine in, the food is served in to-go containers, but that’s OK with us. We are not there for the cutlery or place settings, anyway.

3636 Frankford Road, No. 300. 11 a.m. – 9:30 p.m. Monday – Saturday; closed Sunday.
KEEP THE DALLAS OBSERVER FREE... Since we started the Dallas Observer, it has been defined as the free, independent voice of Dallas, and we'd like to keep it that way. With local media under siege, it's more important than ever for us to rally support behind funding our local journalism. You can help by participating in our "I Support" program, allowing us to keep offering readers access to our incisive coverage of local news, food and culture with no paywalls.
Make a one-time donation today for as little as $1.