Review: National Anthem Is a Mix Tape of Greatest Hits 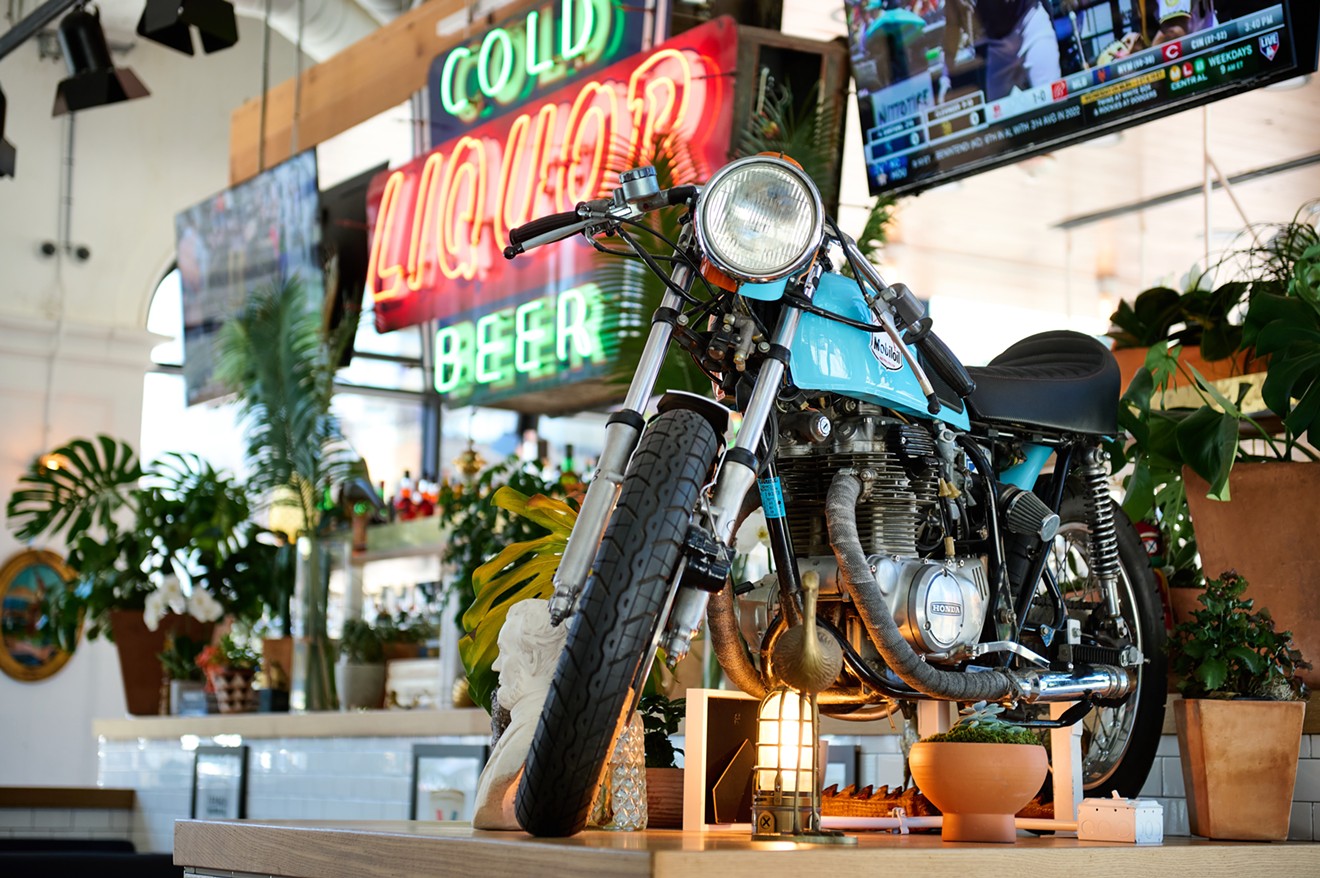 Motorcycles and dirt bikes are a common theme at Nick Badonvinus' restaurants. Alison McLean
Of course there's a motorcycle.

With Nick Badovinus’ knack for transforming dining rooms into feasts for the eyes, we were anxious to see what was in store at National Anthem, his newest venture in Dallas' East Quarter, the city's new name for the east side of downtown. Inside however, the boisterous and fun attitude of other Badovinus ventures is replaced with something that feels a little more grown-up at first glance. Town Hearth has a dining room that sports a pair of motorcycles, an MG sports car and 64 chandeliers. Desert Racer has its own collection of cars and motorcycles while it channels an outdoorsy desert southwest feel.

At National Anthem, plants and greenery abound in windows and shelves, which contribute to a classy but casual vibe. But keep looking, and the playful touches start to register. Of course, it's difficult to miss the neon signage over the bar announcing cold beer and liquor, which patrons of the now-shuttered Off-Site Kitchen will quickly recognize. Vintage automobile advertisements are framed and displayed in a nod to the building’s history. And there it is, a 1970s Honda dirt bike perched on a partial wall separating the bar from the dining room, surrounded by plants and straddling busts of Abraham Lincoln and JFK. National Anthem at the narrow end of the Magnolia Oil building in the burgeoning East Quarter.
Alison McLean
National Anthem occupies the trapezoid Magnolia Oil building, where Commerce Street, Jackson Street and Cesar Chavez Boulevard come together. One hundred years ago, this part of downtown was the epicenter of Dallas’ Automobile Row. The building arches swept over cars that drove into a full service fueling station. The service station was the ground floor, with Magnolia Oil’s offices on the second floor (the famed Magnolia Building on Akard wouldn’t open for another two, and the iconic neon Pegasus wouldn’t take its place on the roof until 1934). In the years since the building served as the longtime home of KLIF radio, and for a while, the offices of the Dallas Observer.

Today, over a century later, those graceful arches have been enclosed in glass to enclose National Anthem’s dining room. Bright light abounds during the day and early evening. Inside, white oak floors and white painted walls team up with the massive arched windows to make the space feel open and airy, even on the narrow end of the space that’s home to National Anthem’s wedge-shaped bar. It's a space that brightens your spirits, and you can't help but feel that a fun visit awaits. Fun is the name of the game at National Anthem, and as the space puts you in the mood for merriment, the menu plays along with influences from Badovinus’ other establishments.

Fresh seafood pops up often on the menu; Badovinus hails from Washington state, and his Montlake Cut restaurant in the Park Cities pays homage to his Seattle upbringing, which is easy to see here too. For openers, there’s a daily ceviche or crudo, lightheartedly described on the menu as “wyd? just keeping it chill and tasty." On one of our visits, the daily was a salmon belly from Alaska, and another visit featured oysters from Prince Edward Island. You can also find half-shelled oysters or chilled shrimp under the Rawish Bar section of the menu, but if you like your seafood appetizers cooked, then Bar Harbor Mussels Diablo ($19) will be right up your alley.

An order comes in a heaping bowl (we counted 19 steamed shells in ours) and could easily make a meal on its own. The mussels are served in a buttery white wine broth with just enough red pepper to give a touch of heat, and a fist-sized wedge of buttered bread that you’ll be using to soak up extra broth. Should you run out of the light and buttery bread, you can order a bread service ($5) with two more large chunks of bread, along with whipped and lightly salted butter. The bread is fantastic on its own, even if you didn’t order the mussels. 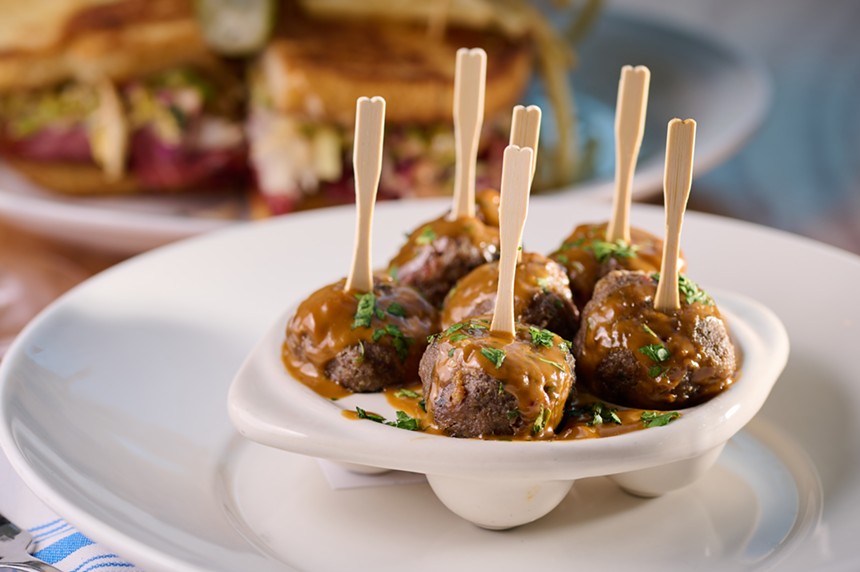 Meaty Smalls come swimming in a voodoo sauce that is pure goodness.
Alison McLean
On another visit, we started our meal with an order of Meaty Smalls ($13), which are the ground chuck meatballs served in voodoo sauce from another one of Badovinus' restaurants, Neighborhood Services. The goodness from the NS standby carries over here, and an order of six savory globes of beef is perfect to share. The bread service pairs well here, too, if you've any leftover voodoo sauce in need of a good sopping up.

Entrées continue the mix tape of Badovinus’ greatest hits. There are a trio of steak frites dishes that would feel at home at Town Hearth, except National Anthem brings them to a more affordable realm. The most expensive here, a 14-ounce Delmonico rib-eye for $54, is the lowest price of admission for something similar at Town Hearth.

The rest of the main plates lean more casual. Naturally, the man who brought us Off-Site Kitchen includes a burger on National Anthem’s menu. As much as we miss Off-Site, which closed in 2020 at the height of the pandemic, we yearned to try the Reuben Riff ($21), stacked with thick slices of pastrami, sauerkraut and a Russian-dressed slaw, along with white cheddar cheese and Creole mustard between two slabs of toasted sourdough. It’s a delicious if messy interpretation and the only thing that could make the sandwich better is the inclusion of an extra napkin. The thin shoestring fries overflow from a ramekin next to the sandwich and are tossed with truffle oil and topped with grated Parmesan; nothing groundbreaking, but addictive nonetheless.

On the same visit, our dining companion ordered the vodka rigatoni ($27). The thick-ribbed pasta was an engaging entrée, and our only real complaint is that the vodka tomato sauce erred on the side of caution rather than flavor, although we were pleased to see another slab of that delicious buttery house bread came on top of the dish. It’s not listed on the menu, but it’s possible to add a protein to your pasta; our waiter suggested we add chicken or shrimp, and we went with the bird. It was a decision that was wholly unnecessary; a thin seasoned breast was sliced and laid on top of our dish almost as an afterthought. For an extra $10, we expected chicken that wasn’t quite so rubbery, and it’s perhaps fitting that chicken breast appears nowhere else on NA’s menu. 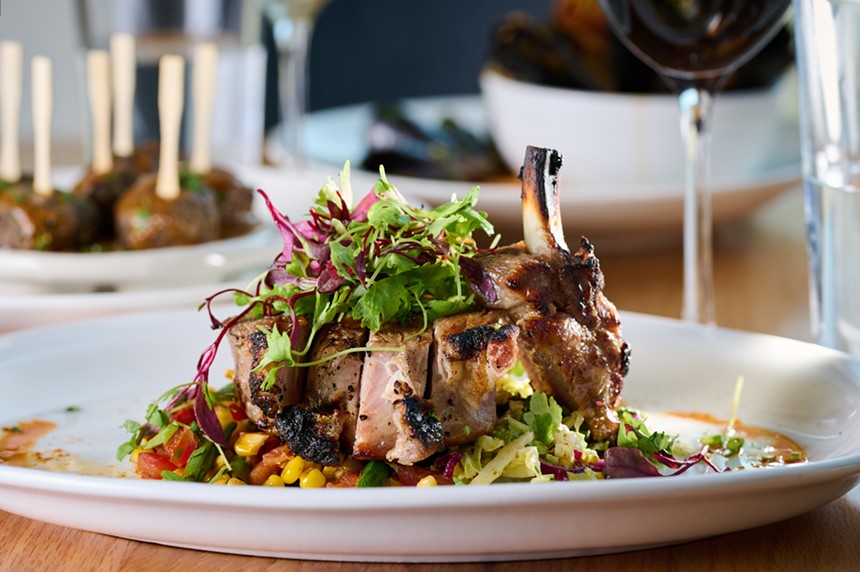 On both nights we visited, a duo of fresh fish dishes were specials (the menu promises “flown in earlier / cooked right now / appropriate sauce”). We picked a halibut almondine ($36) on one visit, with the halibut fillet sourced from Newfoundland. The flaky fish was delicately fried to a golden hue and topped with just the right amount of buttery almondine sauce. Bonavidus’ skill with seafood via Montlake Cut is a boon to the ocean-based fare on National Anthem’s menu. 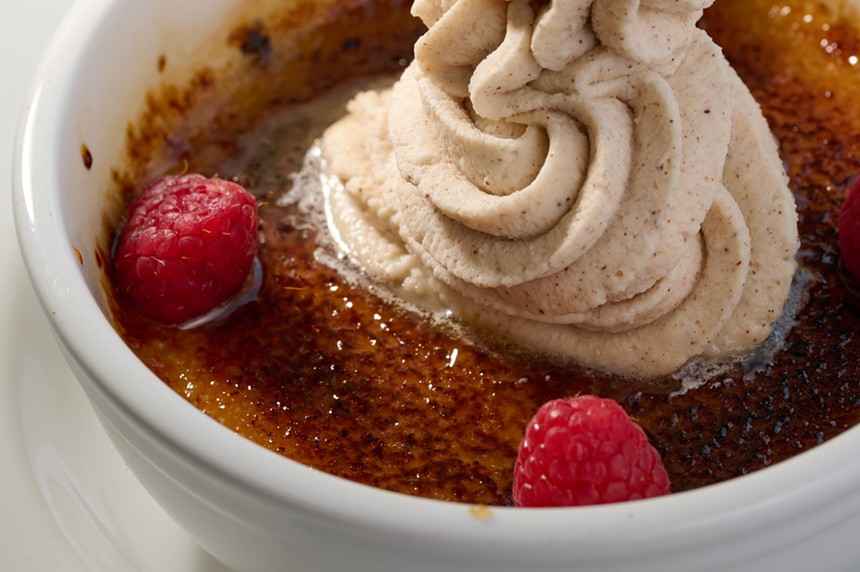 The butterscotch creme brulee is topped with a dollop of cinnamon whipped cream.
Alison McLean
A trio of options wraps up the dessert menu. Your inner 8-year-old may be tempted to order the chocolate chip sea salt cookies with a glass of Yoo-hoo, and there’s a pineapple upside-down bundt cake for more mature palettes. We opted for the butterscotch creme brûlée ($15); it’s described on the menu as enough to share (and also, not available to go), so we seized our moment. The creme brûlée sported a perfect crunchy top of caramelized sugar, and the dollop of cinnamon whipped cream alongside tart raspberries made it an ideal end to our meal.

It feels all but impossible to leave National Anthem in a bad mood. The cheery decor brightens your outlook as soon as you step in, and while the playlist of alternative and rock hits was noticeable, the music wasn’t so loud as to interrupt our conversations over our meals. The staff of chambray- and denim-clad servers (all wearing the same green and white Stan Smith sneakers) provided friendly and attentive service and were helpful with suggestions across the expansive menu.

Under a more critical eye, one might fault National Anthem as a restaurant without a single focus, as if Tom Hank’s man-child character from Big opened a restaurant styled after the loft apartment from the movie, with chocolate chip cookies and motorcycles in place of trampolines and pinball machines. But to take National Anthem seriously is to miss the point. The food is seriously good, and Badovinus’ newest venture is a hodgepodge of greatest hits from all of his restaurants. But National Anthem serves them up with a playful smirk for those who are in on the joke. Yes, the menu offers both steak and Yoo-hoo. So what? National Anthem is a reminder of the joy that we’re supposed to feel when we eat our favorite dishes, and that’s a reminder we can all use now and again.

National Anthem, 2130 Commerce St. 11 a.m. - 10 p.m. Monday - Thursday; 11 a.m.- 11 p.m, Friday; 4 - 11 p.m. Saturday, 4 - 9 p.m. Sunday.
KEEP THE DALLAS OBSERVER FREE... Since we started the Dallas Observer, it has been defined as the free, independent voice of Dallas, and we'd like to keep it that way. With local media under siege, it's more important than ever for us to rally support behind funding our local journalism. You can help by participating in our "I Support" program, allowing us to keep offering readers access to our incisive coverage of local news, food and culture with no paywalls.
Make a one-time donation today for as little as $1.