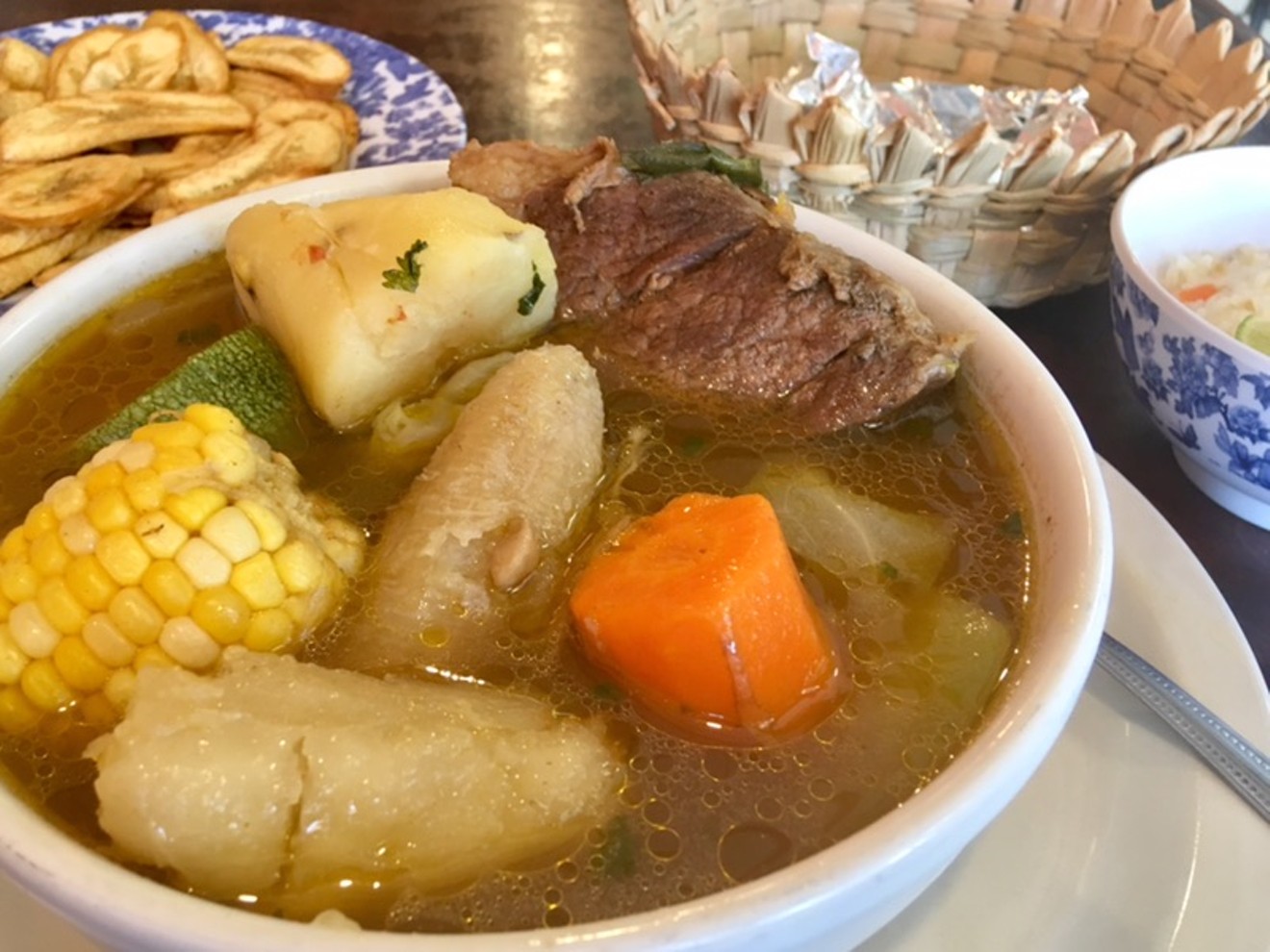 San Pedro’s superb sopa de res, filled with yucca, chayote squash, cabbage, corn and banana. Amanda Albee
When Sandra Montes prays for her restaurant, she asks for customers to come from the north, south, east and west. It appears someone out there is hearing her prayer. San Pedro’s Restaurante, a storefront off West Northwest Highway and Harry Hines specializing in Honduran food, recently celebrated its second birthday in September. The first year was hard, Montes admits. She was falling behind on personal bills to keep the business running, but something happened in the second year: Yelp. 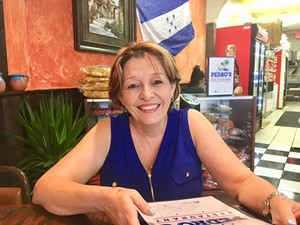 Sandra Montes, owner of San Pedro’s Restaurante, says online reviews from websites like Yelp have helped her keep the doors open at her Honduran restaurant.
Amanda Albee
With 107 positive reviews at the time this article was written, San Pedro’s is one of the very few restaurants in Dallas that maintains a 5-star rating in the crowd-sourced review forum many restaurant owners loathe. One customer’s poor experience that possibly was never addressed with management can be ventilated for the world to read, putting owners’ investment dollars and hours of toil into jeopardy as a result. It’s safe to say online reviews have caused more than a few restaurants to go bankrupt. The University of Maryland has even developed software that can predict with 70 percent accuracy whether a restaurant will make it through the quarter based solely on Yelp reviews.

But for Montes, Yelp is working.

“American people like to check reviews to find new places to try,” she says. Her Yelp presence is possibly what sets San Pedro’s apart from other Honduran restaurants in the area that mostly attract other Hondureños. “In my restaurant, I have Arabs, Indians, whites, everyone. I have people coming from Plano, Richardson, Denton, even Oklahoma for my soup.” 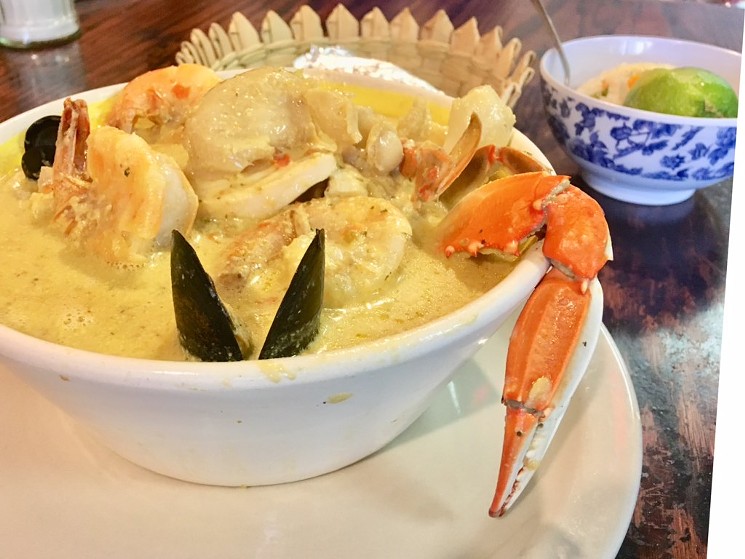 Sopa de caracol, a conch soup with an array of seafood in a smooth coconut milk broth.
Amanda Albee
Montes takes her soup seriously. Her fastidious devotion to consistently good soup is the reason she almost never takes a day off. She begins each day at the restaurant by preparing a vat of the daily special. There’s a different soup each day; maybe there’ll be two on the weekends, but they often sell out. No matter which soup it is, the first slurp will transport you south. Authenticity, perfection and love are in every spoonful.

“If you’re just trying to make money, you will not make it in the restaurant business; you have to add love to the food,” Montes says. 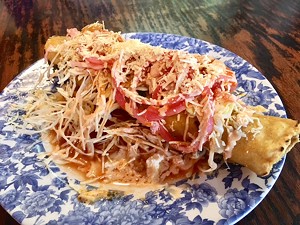 San Pedro's taco hondureño
Amanda Albee
Sopa de res, a predominant lunch throughout all of Central and South America, carries some of that love. It consists of a tender beef rib floating in rich bone broth along with yucca, chayote squash, cabbage, corn and a banana.

“Every soup in Honduras has to have a banana," Montes says.

For those wanting to try a typical Honduran soup, visit on a day she’s making sopa de caracol, conch soup, best mixed with her seafood mariscada, a medley of shrimp, mussels and crab legs swimming in smooth coconut milk broth.

Along with Montes’ delicious homemade food, two of her three sons have contributed to San Pedro’s success. Rudy, the middle son, works full time as a server and is known for making great recommendations and providing friendly service. Her eldest son, Renato, took a year off from his job at Volvo to assist with the restaurant’s opening. He developed the website and still manages their social networking today by responding to every single Yelp, Google and Facebook review. He is affectionately called “el corporativo,” the Corporate, by other employees because of his perfectionist standards. It was his idea to set up a Yelp offer of a free baleada with a check-in, and when working as a server and cook the first year, he consistently asked customers to leave reviews. Her 11-year-old son John sometimes helps with handing out menus.

Renato’s idea of a free baleada proved a compelling enticement. Maybe the restaurant’s most popular dish, baleadas are typical Honduran breakfast tortillas stuffed with beans, cheese and crema. Like most everything in the restaurant, the flour tortillas are made by hand. Available all day, the baleadas can additionally be stuffed with eggs, avocado, carne asada or chorizo. A plate of platanos with crema Hondureña makes an excellent side dish, and Montes’ cafe con leche is a must-try. Customers try to get Montes’ recipe for her perfectly mixed coffee from her sons, but they know better than to tell, she says. She’s secretive about all of her recipes. 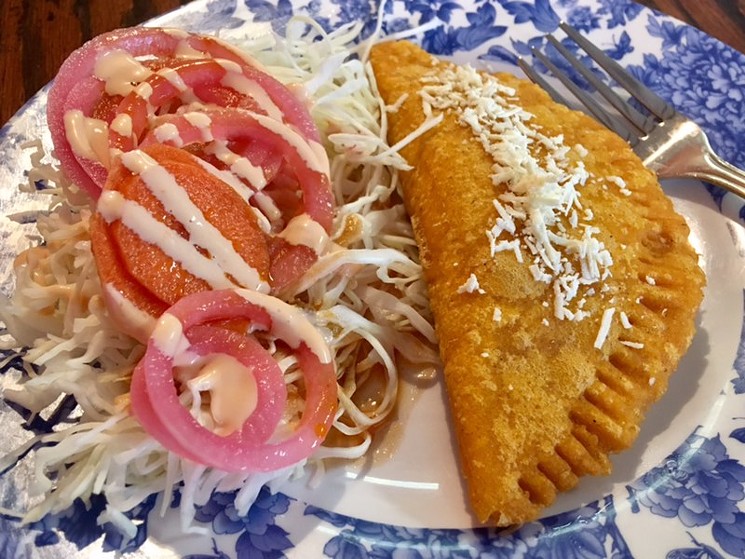 The platos completos section provides a whole other array of temptations, with whole fried red snapper and rotisserie chicken. Cecilia Castro from El Salvador is also in the back making papusas. There are enough options to require more than one visit, but when you do go, get the soup and the coffee, and thank Sandra for all her love — whether on Yelp or in person.

San Pedro's Restaurante, 2445 W. Northwest Hwy., Dallas
KEEP THE DALLAS OBSERVER FREE... Since we started the Dallas Observer, it has been defined as the free, independent voice of Dallas, and we'd like to keep it that way. With local media under siege, it's more important than ever for us to rally support behind funding our local journalism. You can help by participating in our "I Support" program, allowing us to keep offering readers access to our incisive coverage of local news, food and culture with no paywalls.
Make a one-time donation today for as little as $1.
Amanda Albee
Contact: Amanda Albee