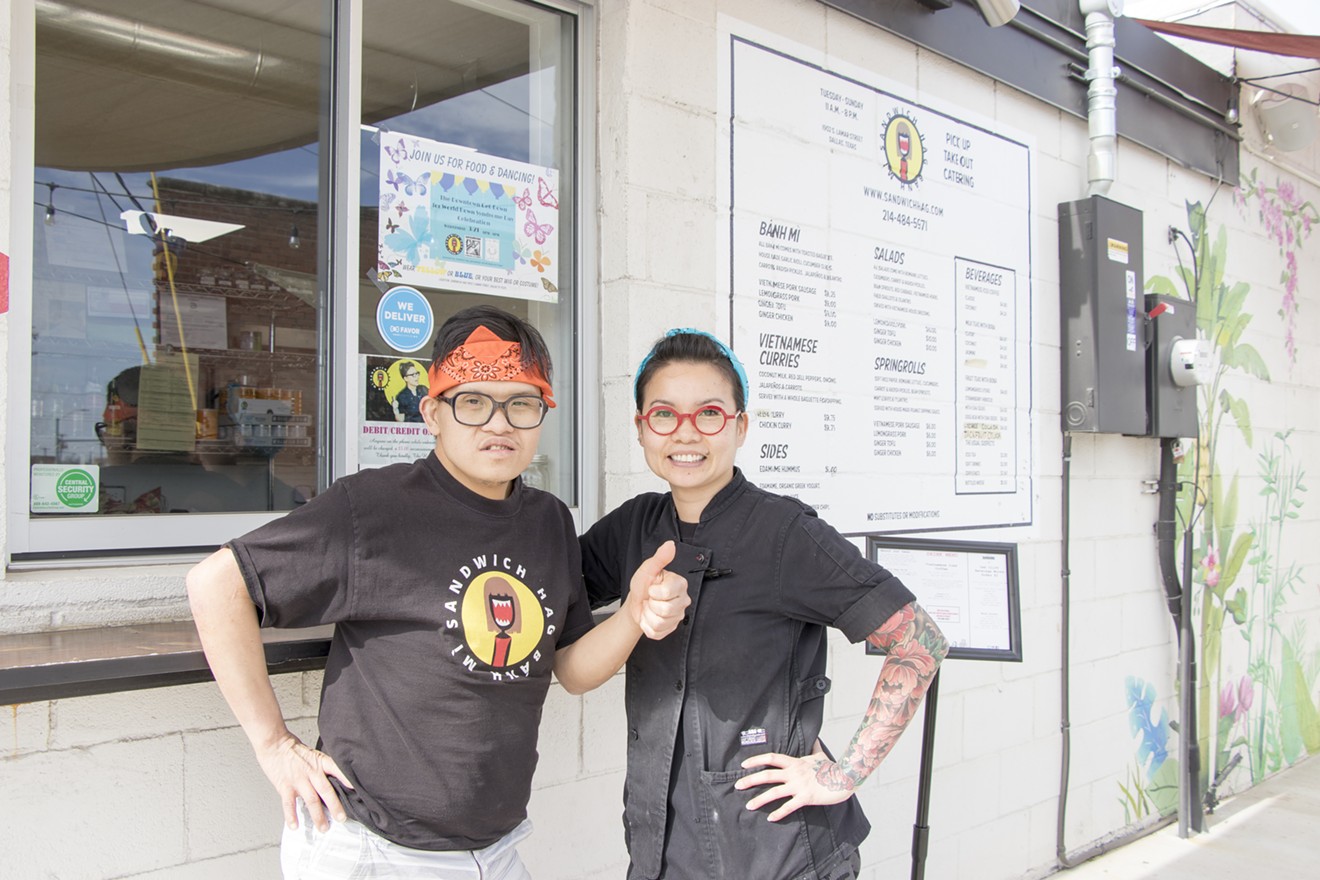 Sugar Sang (left) and his sister Reyna Duong, owner of Sandwich Hag in the Cedars. Taylor Adams
Sugar Sang is industrious, hard-working and intuitive. He knows his way around the customers and in the kitchen at his sister’s walk-up window restaurant, Sandwich Hag.

Sang, 37, has knife skills and knows how to cook. He can do just about anything you ask him to, except one thing: He can’t work directly with food.

“He’s very clean, but he can’t get a food-handling certificate. It would be great if there were a way for them to,” Reyna Duong says of her brother and others with Down syndrome.


“This is a platform for awareness and inclusivity for Down syndrome. It gives them hope that inclusion does work.” — Sandwich Hag owner Reyna Duong

For Duong, leaving the corporate world to open Sandwich Hag, a restaurant that serves Vietnamese food, wasn’t quite enough. While she makes sure the kitchen takes care of every ingredient and process, what drives her is a commitment to inclusiveness.

Duong, 40, works alongside her brother, who speaks Vietnamese and English, every day and marvels at what he can do. He doesn’t stay in the back. He engages with customers and takes care of the restaurant on South Lamar Street in the Cedars.

Duong started thinking about the restaurant after her mother died just over two years ago. Duong and her brother are two of 12 children. Their parents moved from southern Vietnam when Duong was 1.

Sandwich Hag customers can get made-from-scratch banh mi, curry and Vietnamese iced coffee.
Beth Rankin
Her food philosophy comes from the same place many Vietnamese cooks get their education: a parent.

“When she passed away from cancer, I just wanted to redirect that energy into this,” Duong says of her mother, Tram Vo. “Every time I make a certain dish, [Sang] says, ‘Aw, Mom made this … .’ All of this hard work is worth it when he feels our mom’s spirit.”

The fact that her brother is basically front-of-house (he would be, anyway, if the window could be categorized that way) has been a positive influence for customers, Duong says.

“This is a platform for awareness and inclusivity for Down syndrome,” she says. “It gives them hope that inclusion does work.”

From 6-8 p.m. March 21, the restaurant is hosting an event to commemorate World Down Syndrome Day. The date was chosen because people with Down syndrome have an extra chromosome 21, which causes the condition.

It's obvious when a customer walks up how excited Sang is to get to work. But Duong sometimes sees customers who appear uncomfortable approaching him. Her thought is that many are afraid of saying the wrong thing. Duong left the corporate world to open Sandwich Hag.
Beth Rankin
"I recognize a lot of folks aren’t sure how to approach or interact with someone that has Down syndrome," Duong says. "Not because they don’t want to, but rather [they're] afraid to impose or just not sure what to say. If they start with a 'Hello, how are you?' that starts to break the ice. And if they don’t get an immediate response, don’t worry — just keep talking. Because much like Sang, he’s feeling the person out."

After an icebreaker, Sang starts feeling more comfortable and will converse more. It happened when he sat down with a reporter who was scribbling notes at every word said. It’s a joy to see that and to work alongside him, Duong says.

“Sang is such an inspiration to me,” she says. “I need to give him more credit. Every day, I’m learning something new from him.”

It's not just because he’s family. It’s easy enough for other business operators to employ people “of all abilities,” Duong says.

“Give them a role — whether it’s a kitchen, restaurant or store. Every employee has a role,” she says. “From there, train them for that role. Then, as they evolve and catch on, now add onto it.”

In other words, treat people with Down syndrome like you would your other employees.

“I’m holding him accountable and having conversations when he’s acting inappropriately and also praising him. He doesn’t get a free pass. That’s the last thing they need,” Duong says. “All they want is to be part of the community and be treated the same as everybody else.” “Now I’m starting to show him the register and learning what works for him. Like ours is color-coded,” Duong says. “As soon as he picks it up, he’s good. … Sang is able to do anything.”

Except handle food. While it would be easy for someone to watch Sang in the kitchen and see his competency, the written test component would be out of reach for him, Duong says.

Duong is serious about promoting inclusiveness in the neighborhood. There’s a mural called “CommUnity” on the side of the restaurant’s building, and it's dedicated to the Cedars.

Kathrina Rupit, an artist based in Dublin, Ireland, did the mural with the idea that the woman doesn’t represent one race or ethnicity, but a blending of them united in one being. Artist Kathrina Rupit created this mural outside Sandwich Hag.
Beth Rankin
Her restaurant’s name is intentional. Words are important, she says, and not all words have to be negative, such as “hag.” Many people who order tell her, “You’re not a hag,” to which she responds, “What’s so bad about a hag?”

Everything else is intentional, too, from the experience of working with Duong or her brother to the playlist that sets the environment and the handmade components of her banh mis.

“Everything we touch has to be done with love and care,” she says. “The best advice I have is to be completely themselves … . The rest falls into place with proper planning.

“I left corporate America to do this,” she says. “The money’s not as good. But the intrinsic value far outweighs the monetary.”