If you loved the atmosphere of Serious Pizza before, just get ready for something different. courtesy of Serious Pizza
A Deep Ellum standby is getting a major facelift. After having closed earlier this year for renovations, then being forced to remain closed longer because of the pandemic, Serious Pizza is gearing up for a grand return.

Serious Pizza first opened in 2011 as a small, hole-in-the-wall pizza joint on Elm Street. It was like a dive bar in the sense that seating was limited, the walls were covered in art and writings and music would blare until the wee hours of the morning.

Truthfully, that’s the way many of us loved it. But when it returns, Serious Pizza will be designed to serve even more customers and offer an “eclectic,” experience, owner Mike Turley says.

“When we opened up the doors, we didn’t expect such a huge following off the bat,” Turley says. “... When we started, we only had like 40 seats and not a lot of room for people to get in there. Now we have close to 200 seats.”’

“I have high hopes that Milkshake Concepts will take Serious Pizza to new levels,” Turley says.

As part of the new Serious Pizza experience, a live DJ will spin on Friday and Saturday nights. There will be a “floor captain” on staff to greet guests as they arrive and make sure they are having a good time. Merchandise will also be available for purchase.

While Serious Pizza doesn’t have a set date for its reopening, they are hoping to be able to reopen “later this year.” Upon reopening, they’ll hire around 35 new staff.

“It’s going to look a lot nicer and look a lot cleaner,” Turley says. “It’ll have kind of a more efficient layout for everybody. There will be a little more space to make the pizza but a lot more space for the customers.” 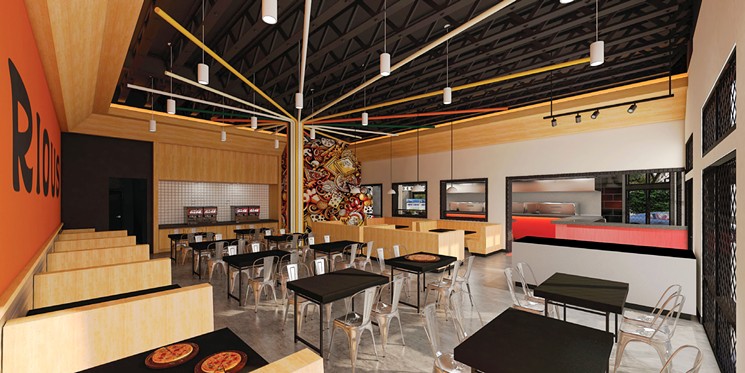 “I was just amazed by the lines that would just spill out of the door every single weekend,” Sheikh says.

In 2018, Sheikh was introduced to Turley. While he was a fan of the food, he felt the restaurant itself was missing something.

“I was very honest with him,” Sheikh says. “I said I always found that the place was lacking a little bit of character, and obviously, [it was] a little bit tired and beaten up.”

In addition to the revamp, Serious Pizza has also signed a lease to keep this location open for another 10 years. There are also plans to open a location in Fort Worth on West Seventh Street.

In the meantime, guests can rest assured that while the Deep Ellum location is undergoing many changes, the parts people love about Serious Pizza will remain.

“We’re still going to keep it very true to Serious Pizza,” Sheikh says. “It's still going to be quite raw, quite edgy. We're not trying to reinvent the wheel here, but we do definitely want to see a slightly different experience, and we think people are really, really going to respond well to it.”

Serious Pizza, 2807 Elm St. (Deep Ellum) Set to reopen later this year.
KEEP THE DALLAS OBSERVER FREE... Since we started the Dallas Observer, it has been defined as the free, independent voice of Dallas, and we'd like to keep it that way. With local media under siege, it's more important than ever for us to rally support behind funding our local journalism. You can help by participating in our "I Support" program, allowing us to keep offering readers access to our incisive coverage of local news, food and culture with no paywalls.
Make a one-time donation today for as little as $1.