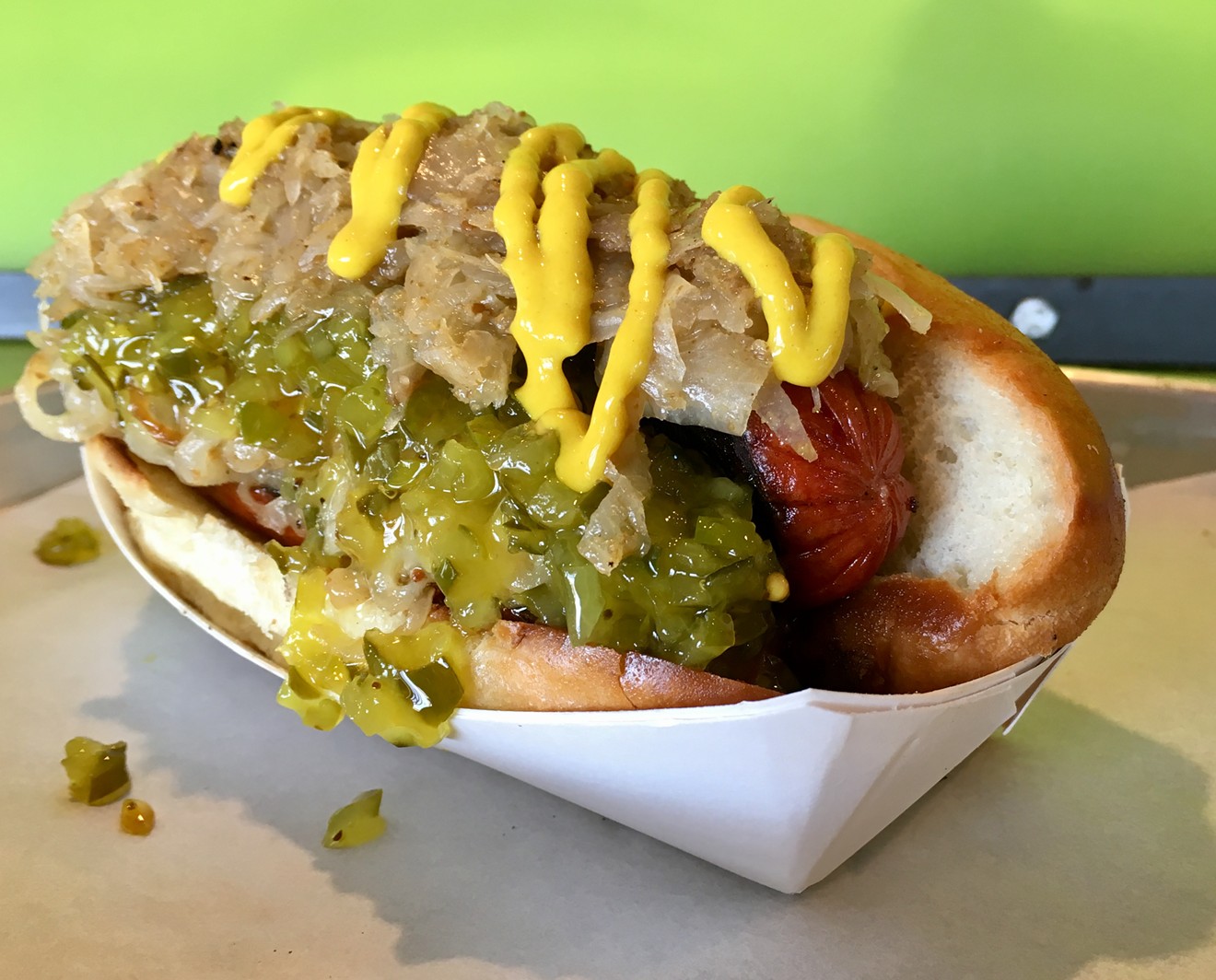 Tender, nutmeg-forward sauerkraut, griddled onions and relish top the Sidecar dog at Pints & Quarts ($6.25). Nick Rallo
It almost sounds like the ocean. The hot dog hits the roaring hot griddle and makes a shushing sound. The hiss swells and quiets. With the garage door wheeled open, a breeze zigzags through Pints & Quarts. It’s the closest thing to the feel of a coastal street dog that we’ve got in the downtown area.

Burger patties swell to a concave shape near the dog, beef fat encrusting them with discs, but honestly, they’re looking overcooked. The hot dog, a paprika-red link, glistens as it sears on the hot flat-top — it’s going to blow the burgers out of the water.

A thick layer of sauerkraut, dark and warm with nutmeg, sits on a nest of softened onions. A line of relish like a manicured hedge runs alongside, and it gets a whiplash of mustard. The hot dog is blackened-seared on the side that hit the griddle.

Good hot dogs are a summer snack. The best ones taste like thunder and hot nights. The snap of grill-char, the rush of salty juices from sausage, and a rain-cool deluge of something sharp like pickles or mustard can call up memories from your childhood vault. These are the dogs that do just that in Dallas — Deep Ellum, in particular, sure has it figured out.

The Sidecar, $6.25
Pints and Quarts, 5434 Ross Ave.
The menu’s dominated by burgers, but the best thing to order at Pints & Quarts is the hot dog stuffed into a homegrown potato bun. Burgers are clunky, often overcooked (even if you ask for medium rare). Sure, you’re paying more than for the average Nathan’s hot dog, but Pints & Quarts loads it with toppings like a van on its way to a Griswold family vacation. A heaping mound of the nutmeg-forward sauerkraut is a must. 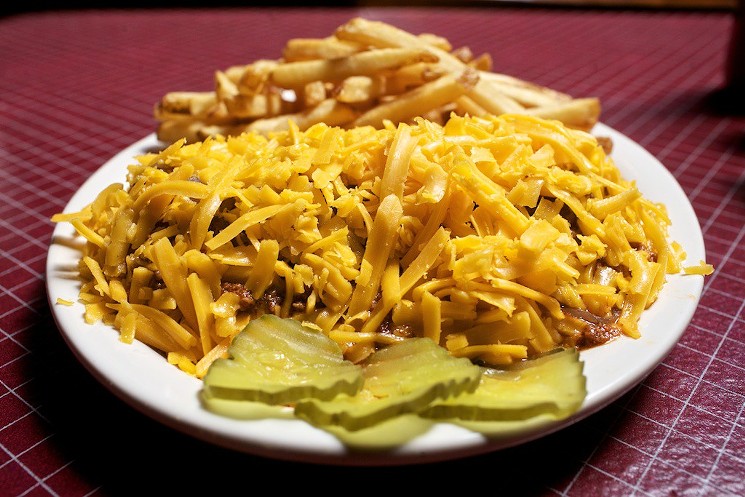 There's a hot dog in there somewhere: The Angry Dog comes piled high with chili and cheddar.
Patrick Michels
The Angry Dog, $7
Angry Dog, 2726 Commerce St.
If you’re looking for elegance in your bar food, you’ll find an empty embrace at Angry Dog. Hot dogs, butterflied and grilled, arrive under a mountain of shredded cheddar. As Deep Ellum whirls with change, this Commerce Street bar has been open for almost 28 years. How has it lasted this long? By serving no-frills, goes-well-with-beer bar classics like hot dogs immersed in chili and cheese. Order extra napkins. 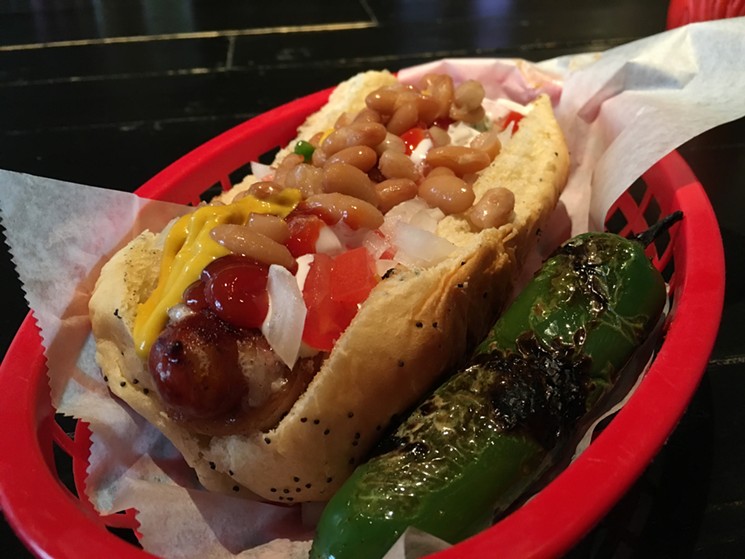 Revolver owner Regino Rojas flat-grills the dog once it's wrapped in bacon. He stews the Peruvian beans in house.
Nick Rallo
The Mexican Dog, $9
Revolver Taco Lounge, 2701 Main St.
The Mexican Dog was inspired by hot dogs that Revolver owner Regino Rojas grew up on — an homage to the memory of bacon-wrapped meat tubes rolling in carts around Guadalajara, Mexico. Inside Revolver, the steam from the Luscher's hot dog has an unmistakable aroma, possibly from the smoky bacon that spirals around it. Rojas amps up his version with crema, bright tomatoes, onions and a scatter of tender mayocoba beans. The basket it's served in is heavy, which is a good sign. Food that makes baskets heavy usually punches a hole in a hangover like a repulsor ray from Iron Man. 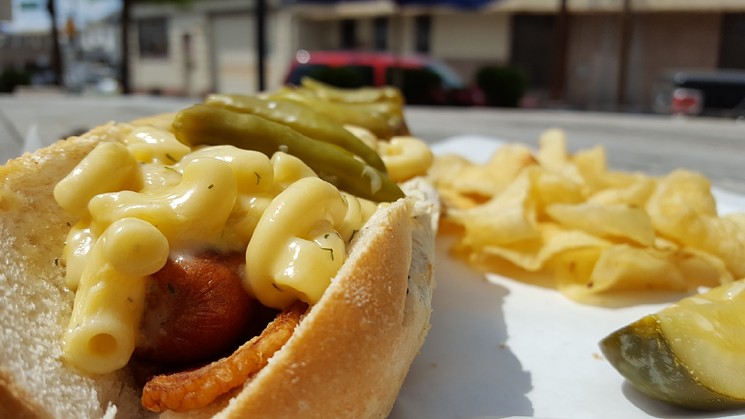 It's rare to find a foot long dog in Dallas these days. This one's topped with mac and cheese for $10.
Cold Beer Company
The Expo Dog
Cold Beer Co., 3600 Main St.
How are you? Are you OK? If not, don’t worry — it’s likely you’re just in extreme need of an hot dog that’s as long as your arm and smothered in macaroni and cheese. Cold Beer Co., master of knowing exactly what bullshit-free bar food you need after a handful of high-ABV beers, will drop a foot-long dog in front of you that’s adorned like a crown with mac and cheese, bacon and punchy sport peppers. This isn’t empty-hearted comfort food, either; CBC gets its hot dogs from Rudolph's Meat Market, the122-year-old butcher shop down the street. 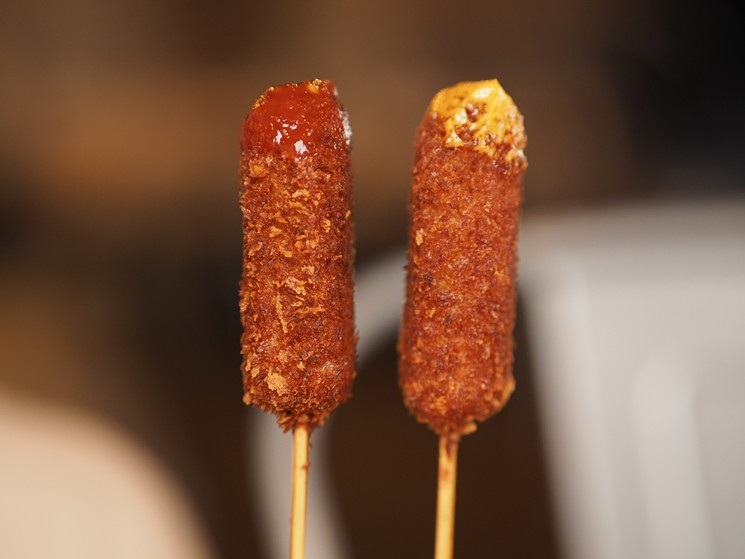 The corn dogs at Sumo Shack are an homage to katsu pork, breaded in a deeply crispy panko batter and served with two dipping sauces for less than five bucks.
Sumo Shack
Katsu Corn Dogs
Sumo Shack, 5629 SMU Blvd.
Sumo Shack's Tokyo Dog, made with housemade wagyu-blend beef sausage, comes with a neat pile of bonito flakes, scallions, caramelized onions and nori. It’s late-night food that skews towards Japanese street food, and it's unlike anything University Park has seen before. The katsu corn dogs, however, a snack for less than $5, will ring the Texas memory bell. They’re spectacular and simple, a snack of breaded kurobuta sausage. They crunch — from the bronzed panko batter — loud enough to set off car alarms. The sausages encase juices, moated inside the coarse breading. Dip them in the spicy mayo for some good, creamy heat. 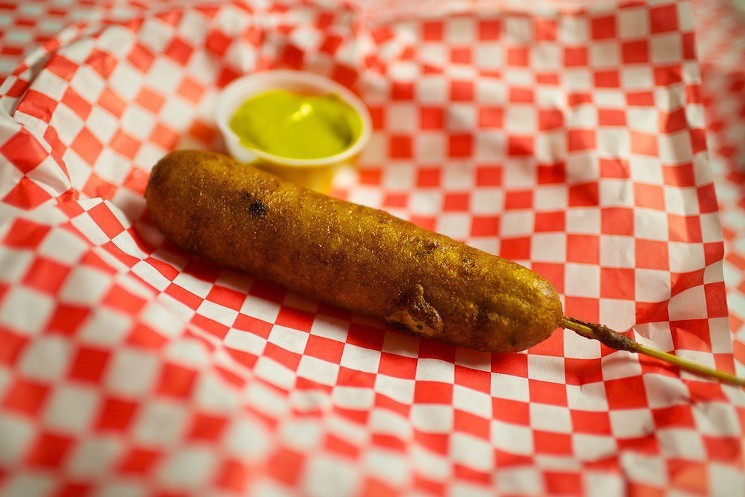 The off-menu, late-night corn dog at the Lakewood Landing, a homemade, jalapeño cornbread batter encased around a Rudolph’s sausage.
Patrick Michels
Midnight Corn Dogs
Lakewood Landing, 5818 Live Oak St.
The late-night corn dogs are a cult favorite at the Landing. They’re hangover killers — no mix of sugary liquor can stop the battering ram that is a Landing corn dog at bar closing time. The Landings use dogs from Rudolph's, too, which are battered in jalapeño corn bread. They appear — off menu — after 11 p.m. on weekdays and after midnight on weekends. Jab them into some mustard. To put it simply, it’s Dallas on a stick. Don’t forget to eat that crispy bit that collects around the bottom.