The 10 Best Restaurants in Dallas — According to Chefs, Bartenders and Industry Insiders 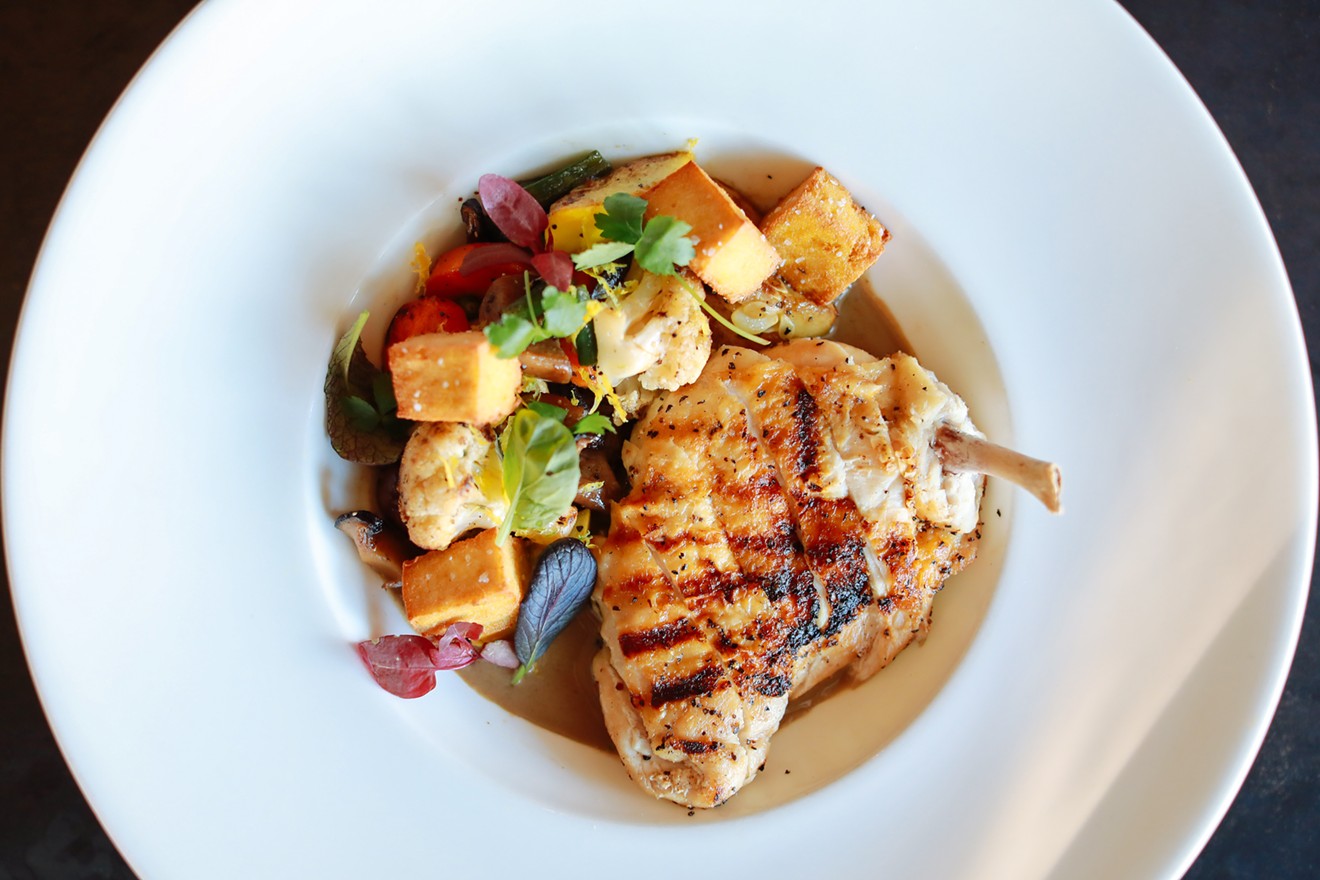 Mot Hai Ba is the best restaurant in Dallas — according to a vote by 67 chefs, restaurant owners, sommeliers, bartenders, food writers and insiders. Kathy Tran
Last week I published my list of the Top 100 Dallas Restaurants. That list was based on my meals at over 400 eateries in Dallas and its suburbs, but it was also based on my own judgment.

This new ranking is an alternative. Not content with building my own list, I surveyed more than 60 Dallas-area chefs and industry insiders to find out what they consider to be the top restaurants. Here are the results of that survey — along with an analysis of which restaurants, in industry professionals' opinions, are most overrated and underrated by critics like me.

How the survey worked
I asked 75 food industry insiders to name their personal "top 10" places to eat in the Dallas area, using any criteria they wanted and with the knowledge that their individual votes would be kept secret. Of the 75, 67 cast ballots, seven did not reply (or agreed to participate and then forgot) and one person declined to vote. Some listed the restaurants they felt were the best, others named the places they visit most frequently and many combined those two approaches.

The 67 voters included chefs, cooks, pitmasters, bartenders, sommeliers, restaurant owners, food writers and a handful of extremely knowledgeable diners who have long served as my "informants." Here are their names:

In total, our 67 voters named 276 Dallas-area restaurants — 109 establishments received multiple votes, and 167 appeared on a single ballot each. In truth, some of them aren't restaurants, including nominations for a liquor store taco counter, underground dinner series Frank and the Sunday Thai food market at Wat Dallas. One admirer even cast a vote for "anywhere Anastacia Quiñones-Pittman is cooking," which at the time meant pop-ups. She has since been hired by Lovers Lane eatery José.

Enough explaining. Let's get on to the results.

The most underrated restaurants in Dallas, according to insiders
The biggest surprise to me was the overwhelming showing for The Slow Bone, which not only blew out every other barbecue joint in Dallas but found itself safely within the top 10 overall. The Slow Bone racked up 11 votes — compared with four for Pecan Lodge and a single vote for Hutchins BBQ. I suspect chefs love that they can get good barbecue near downtown without having to wait in a long line of hyped-up tourists.

Two new restaurants exceeded expectations, too. Macellaio, the younger, more relaxed sibling to Lucia, placed No. 17 in my own Top 100, but chefs and industry professionals like it even more than that. The same goes for Izkina, a tapas bar in Deep Ellum so new that I didn't have time to visit it at all before filing my Top 100 listing. Clearly I should have shuffled my schedule around. (We're reviewing Izkina soon.)

Further down the ballot, several other restaurants received support disproportionate to their critical acclaim. Everybody loves Zoli's. Sichuan Folk received six votes, the most of any Chinese restaurant, validating our decision to rank it in the Top 20. Five people named Sandwich Hag, the Cedars neighborhood's banh mi spot, and Cosmo's, the Lakewood bar with a Vietnamese menu.

Reyna Duong, chef-owner of Sandwich Hag, agreed to go on the record with her vote for Cosmo's. On Wednesdays, crunchy Vietnamese fried chicken and coleslaw with fish sauce are the star at Cosmo's for $12.
Nick Rallo
"I get so many folks asking me to make pho," she wrote via Facebook message. "But I tell them, go to Cosmo's!"

If you feel like you've eaten at every good restaurant Dallas has to offer, give one of them a try.

The most overrated restaurants in Dallas, according to insiders
I was curious to find out if chefs thought I had goofed on my own ranking. The answer: yes, a little. My No. 3 pick, Mot Hai Ba, got double the votes of my No. 1, Revolver Taco Lounge. No. 15 Gorji and No. 16 SpicyZest got no votes at all. But I still feel confident that those restaurants will gain more acclaim as more diners find out about them.

I cross-referenced the industry survey with other "best restaurants" lists, in addition to my own. Seven restaurants from the current Eater 38 received no votes in my poll: Deli News, Kalachandji's, Mesa, Nora, Spiral Diner and two additional businesses that were probably omitted because they are in Fort Worth.

On the most recent D Magazine top 50 list, survey winner Mot Hai Ba is all the way down at No. 12, behind No. 7 Fearing's, which received just one vote in the industry poll. (That vote came from a food writer, not a chef.) No. 17 Zaytinya also had just one supporter in my survey, while No. 16 Pappas Bros., No. 23 CBD Provisions, No. 26 Al Biernat's and No. 30 Abacus — all steakhouses — drew zeroes.

A few more big names are missing from the survey results. None of the voting chefs, bartenders or restaurateurs mentioned The Mansion, Cadot or such prominent steakhouses as Capital Grille, Truluck's or Dakota's. Mirador got only two votes; Fine China, Bob's Steak & Chop House, Cafe Pacific, Lavendou Bistro, Parigi, Fachini, Montlake Cut and Shinsei each got just one.

Flora Street Cafe received six votes, but one of them specified Flora Street under a previous chef who has since departed (Robbie Nowlin). All of the remaining five supporters are current or former food writers, not chefs or restaurant workers.

I was also surprised at the lack of support for Babe's Chicken Dinner House and Cafe Momentum (one vote each). E Bar Tex-Mex had a healthy showing with five votes — but it was the only Tex-Mex restaurant in Dallas to appear on more than two ballots.

13 votes: Petra and the Beast