At One of Dallas’ Favorite Taquerias, Almost Anything Can Go Inside a Taco

The paneer kathi roll taco special at Resident Taqueria. Brian Reinhart
(Note: We’re revisiting some of Brian Reinhart’s picks for our annual list of Top 100 Dallas Restaurants to see how they're faring in what we hope are the final months of the pandemic.)

Falafel. Crab cakes. Buffalo wings. Paneer. Escargot. They’re the foods of half the world, and they have one thing in common: You can get them on a taco.

At Resident Taqueria in northeast Dallas, the taco has always smashed expectations and stereotypes, connecting Mexican tradition with flavors from France, China, India and everywhere else. Almost anything can appear on tortillas at chef Andrew Savoie’s spot, and during the coronavirus pandemic, his business has survived thanks, in part, to a deep roster of creative specials.

I recently called Savoie and asked him directly: Can pretty much any food become a taco, if you try?

Savoie says many of his pandemic ideas have come from home cooking and Instagram scrolling.

“I have three kids, and it’s not like I just cook for the kids — 'Oh, chicken nuggets and french fries, here,"” he explains. “Last night I made — here’s a taco you may see pretty soon — I made brandade, a French dish where you take salt cod and you steam it and you have this cod patty. And I thought, oh, this would be perfect in a taco. It just needs some texture, a sauce, something acidic, and there it is. It’s fun. I just have fun with it.”

The remarkable thing about Resident Taqueria is that these ideas are not half-baked. Savoie looks for ways to tie a global pantry of ideas to Latin American flavors, to make sure that the taco’s Mexican roots don’t get lost in fusion confusion. In the words of Texas Monthly taco editor José Ralat, “He respects the traditions and the flavor profiles, but understands there’s a lot of room to play.”

Take Resident’s newish steak frites taco, which, yes, piles steak and crispy-fried potatoes on a tortilla: Savoie developed a spicy, egg-free hollandaise sauce that functions as, and visually mimics, salsa. The result is a delicious cousin to classic carne asada. 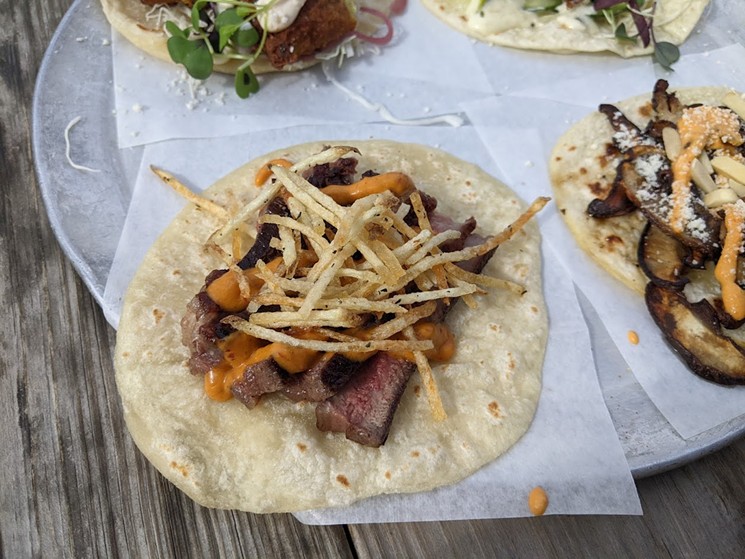 Steak frites taco at Resident Taqueria, with potato "fries" so crispy they don't sag.
Brian Reinhart
An almost-traditional vegetarian taco tops grilled peppers with pickled onion and crumbled cheese. But instead of poblanos, the peppers are Japanese shishitos. Or try my favorite current special, inspired by Indian kathi rolls. Kathi rolls are flatbread-based street foods, too, so the connection makes sense. Savoie caramelizes a slice of marinated paneer and adds sauteed peppers and an Indian-Mexican chutney.

“I try to stay within the lines of ingredients that are indigenous to Latin cuisine,” Savoie says. “So instead of using some of the green chutneys they would use, I have tomatillos, I have kale and cilantro in my chutney, to bring it back to the taco’s Latin roots.”

Before the current cold snap, I enjoyed an early lunch on Resident’s sunny patio and ordered six of the specials to see, firsthand, how texture, acid and a keen sense of cross-cultural compatibilities might produce a taco with, say, falafel.

Savoie started by rethinking the texture of the falafel patties. Instead of softening their crunch with a somehow-Latinized tahini sauce, he brought a creamy softness to the inside of the falafel itself.

Other “specials” are too popular to be removed from the menu, like the crab cake taco, a great one with super-thin slices of cucumber underneath the seared crab. The result is that most past specials are still available in the online ordering system.

Talking about his now very long menu, Savoie laughs in disbelief. “It goes against everything I taught as an instructor about building your menu,” he says. “But what I learned is that by creating these specials and creating them often, customers constantly keep returning. ‘There’s something new? Oh, I have to try that.’”

That’s why, for the Super Bowl, he rolled out a taco with Buffalo sauce. As for what’s next, it could be brandade. Or, frankly, it could be anything.

I pressed Savoie harder: Anything? Really? “You definitely can’t put spaghetti in a taco,” I said.

“No, no, no, you can!” he answered, immediately. “You can’t put spaghetti sauce in a taco, that’s not going to work. But you could use pasta as a binder. For instance, albondigas, Mexican meatballs, we do it very traditional here, we make it with rice, but why can’t you use a noodle and chop it up and blend it in?”

Then he confessed: “I probably wouldn’t ever do that at all.”

Everyone has a limit. But that’s fine. At least until Resident’s next brilliant invention, crab cake and steak frites tacos are more than enough.
KEEP THE DALLAS OBSERVER FREE... Since we started the Dallas Observer, it has been defined as the free, independent voice of Dallas, and we'd like to keep it that way. With local media under siege, it's more important than ever for us to rally support behind funding our local journalism. You can help by participating in our "I Support" program, allowing us to keep offering readers access to our incisive coverage of local news, food and culture with no paywalls.
Make a one-time donation today for as little as $1.