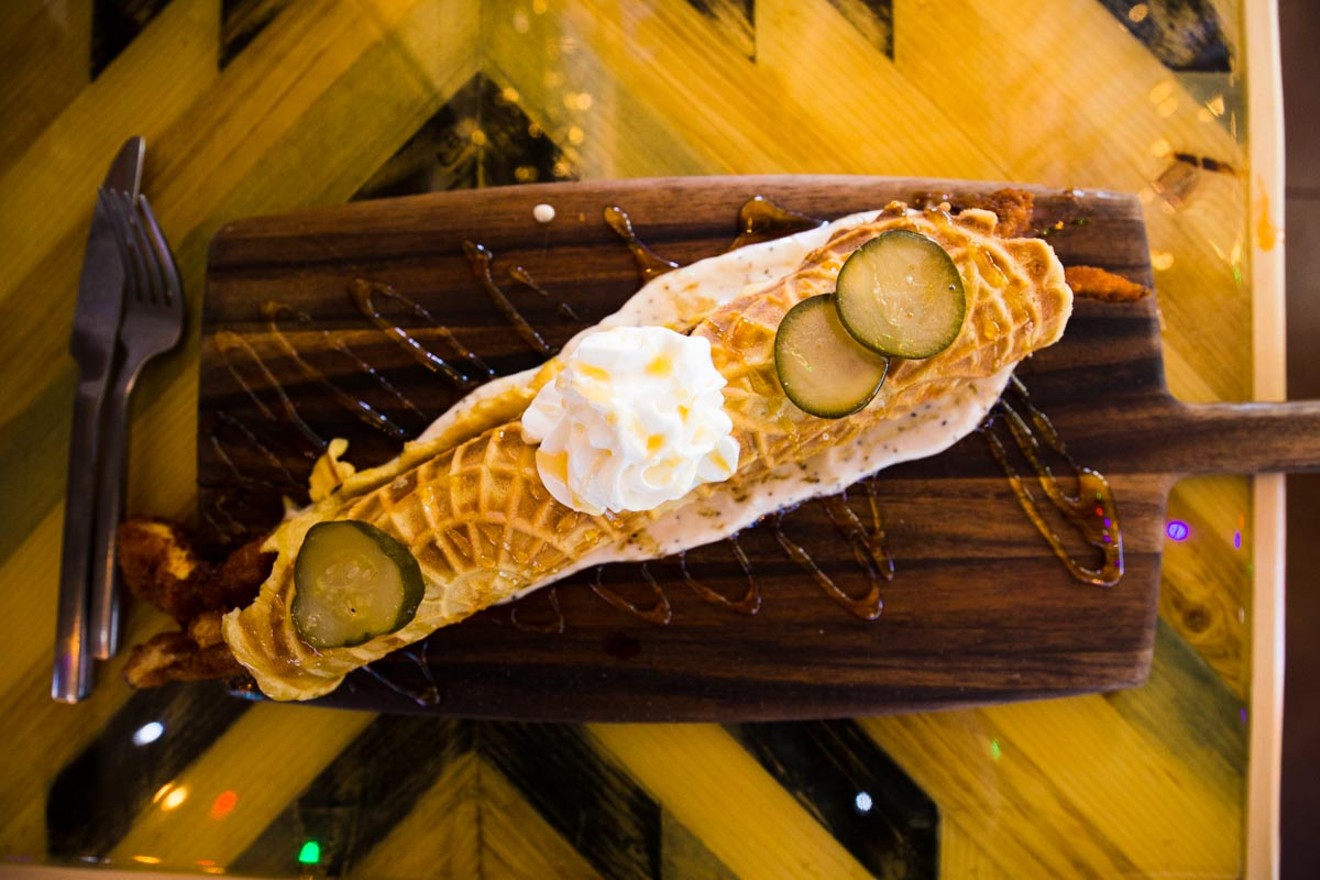 Really, it's a foot-long chicken and waffle cannoli. Normal-sized fork and knife for scale. Chris Wolfgang
Maybe we should have seen this coming.

It's been six months since Zoli's Pizza resurrected in on Midway Road in Addison, and there has been plenty of creativity from owner Jay Jerrier, chef Lee Hunzinger and their team. The gang that once gave us a knock-off Pizza Hut hot dog abomination hasn't missed a beat, offering regular specials like a pie topped with Cattleack BBQ's brisket or the aptly named Meatzilla.

So when Zoli's let the world know via Facebook that a brunch menu was in the works, we took note. However, if you gave us a long weekend, a stocked kitchen and a hint that whatever dish we made would be stuffed into a Brobdingnagian cannoli, we still couldn't have imagined the brunch concoction you see here. 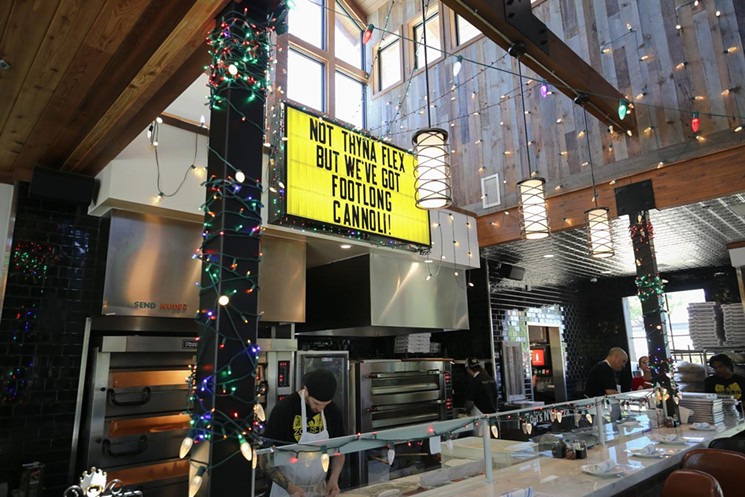 Fo reals, yo, they ain't even tryna flex.
Chris Wolfgang
Zoli's has taken chicken and waffles, a brunch standby, and flipped it on its head. Fried chicken tenderloins get a Nashville hot treatment before they are stuffed into a waffle-type cannoli shell. The cannoli concoction lies in a ladle full of bacon gravy and gets drizzled with habanero honey and crowned with a dollop of fresh whipped cream. A couple of housemade dill pickles top it off, completing the Nashville nod.

Zoli's Facebook post touting this brunch monstrosity claimed its dimensions as a "foot-long pizzelle cone." With visions of rather pedestrian-sized cannoli in our head, we had trouble wrapping our head around one as big as a large man's shoe.  And when we arrived last weekend, Zoli's marquee bragged again of its stature, but we still weren't sure what to expect. We hoped our brunch game was strong enough to hang. 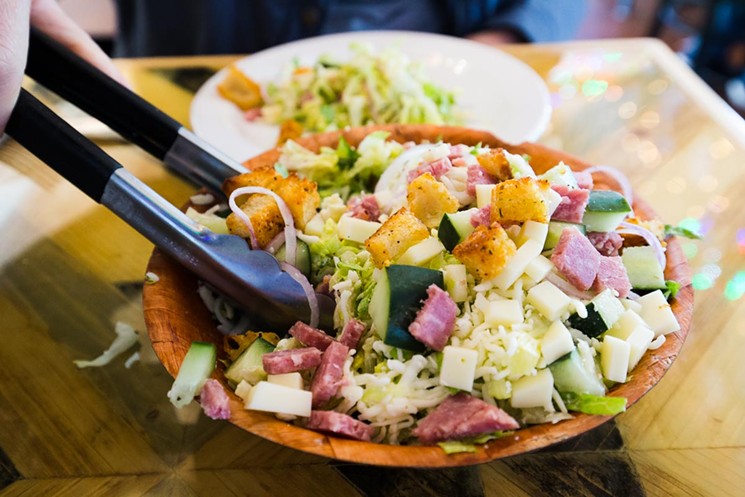 Sure, it's a steal for six bucks, but who orders a salad at brunch? You don't need that kind of negativity in your brunch life.
Chris Wolfgang
Our dining companion for this trip was in a more lunch-eating mood and ordered the smaller of Zoli's chopped salads, which is enough roughage to feed two. And don't get us wrong — for just $6, it's a solid choice, with fresh shredded romaine, provolone, salami, cucumbers, onions and the perfect amount of vinaigrette tossed together. But we're on a brunch mission here, and we don't need that kind of vegetable negativity in our lives.

The cannoli's arrival was a spiritual moment, accompanied by a beam of light and angels singing from above. OK, maybe it was just the longing gazes of those nearby and the '80s music playing overhead, but we're holding fast to our near-religious experience. Deconstructed, the chicken is tender and juicy, if not quite as hot as true Nashville chicken. Under the weight of a fork, the waffle-cookie pizzelle shears off easily into bite-sized pieces while the bacon gravy adds to the savory side of the equation. And at first taste, the habanero honey tastes no different than regular honey, but the peppery tingle comes on nicely after a few seconds on the tongue. 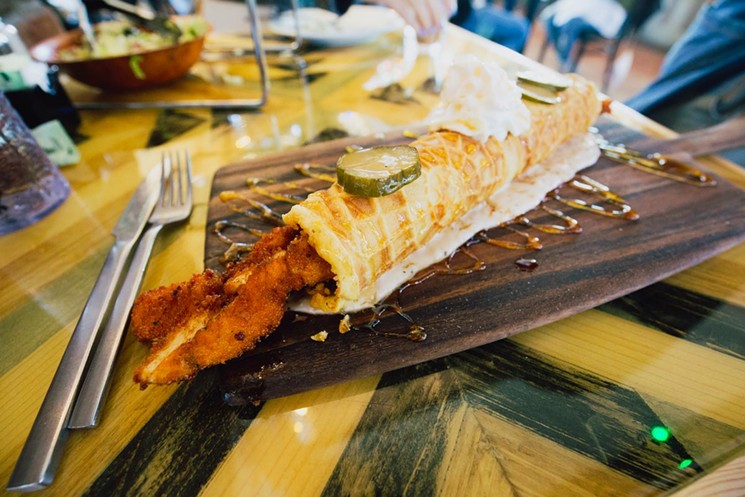 Zoli's brunch cannoli turns the chicken and waffle standby on its head.
Chris Wolfgang
But taken together, Zoli's cannoli is an instant classic. The tried-and-true sweet/savory flavor profile is kicked up a notch with the mild heat from the chicken and the honey. Even the dill pickles were surprisingly enjoyable, and we found ourselves wishing for a few more of them to keep the flavor party going. As astonished as we were by its size, we plowed through the whole thing as if our utensils were guided by some higher force that kept bringing pizzelle/chicken/gravy/honey bites to our lips.

Zoli's claims that the hot chicken and waffle cannoli is a sneak preview of a larger brunch menu yet to come. We can only hope that Zoli's keeps this on the menu. Please, Zoli's! Really, we're not above begging.