WesleyPeterson1 Instagram
Dallasites like to keep their fingers on the pulse of this city, keeping up with Instagram feeds. What to do. Where to go. Where to eat. Many of these decisions are fueled by Insta-inspiration. As they say, take a photo or it didn’t happen. So we’ve rounded up 10 of the best spots to dazzle up your Instagram page with home sweet home.

Teddy bear park
In the heart of Highland Park is a hidden oasis called Lakeside Park filled with lily pads and a beautiful lake. Crossing that lake via a wooden bridge called the Turtle Creek Dam, you’ll find yourself among teddy bear statues. This boasts quite the photo opportunity with the larger-than-life teddy bears.
4601 Lakeside Drive

Instagram
"I love tacos so much" by Urban Taco
Aside from Dallasites digging tacos, they are digging the graffiti alongside Urban Taco’s exterior wall on McKinney Avenue in Uptown. Who needs a boyfriend when you have delicious tacos? This is a popular spot for out-of-town visitors to snag photos.
3411 McKinney Ave.

Instagram
The Rustic
This is where all urban cowboys end up. The Rustic offers Dallasites that cowboy escape, but they don’t have to trample far from home to get it. From the American flag constructed out of beer cans to the twinkling light bulbs, The Rustic is home to live music, cold beer and lots of photography.
3656 Howell St.

Instagram
Belmont Hotel
It's literally a room with a view. Even if you don’t plan on drifting off to the land of nod at the Belmont, it’s worth a sunset view. This boutique Oak Cliff hotel is also home to Smoke, the hotel’s signature eatery offering modern Texas cuisine. If you’re simply thirsty, you can drop by the Barroom @ Belmont in the lobby. Regardless, you’ll want to snap a photo of the Dallas skyline from atop the hill on which the Belmont is nestled.
901 Fort Worth Ave.

Instagram
Traveling Man in Deep Ellum
Three large installations in Deep Ellum can be spotted of the Traveling Man. Artist Brad Oldham created the figures, and now they are beloved mascots of the neighborhood. The statues are composed of polished metal sheets, assembled with rivets, a classic nod to the railway history that runs deep in Deep Ellum.
Near the DART Deep Ellum Station on Good Latimer Expressway

Instagram
The Joule lobby
If you care to swank up your Instagram feed, a stop in The Joule will do the trick. The Joule is one of Dallas’ chicest hotels, nestled in a revitalized 1920s neo-Gothic landmark building. One of the most popular photo ops includes an art installation in the lobby that is literally art in motion: a moving cog-and-wheel sculpture. And of course we can’t leave out The Eye, a sculpture of an eyeball that towers 30-feet high in the green space across the street from the hotel.
1530 Main St.

Instagram
Klyde Warren Park
This park above a freeway is an Instagram feed’s dream. All sorts of moving parts here: food trucks, free workouts on the grass, beautiful light fixtures and picturesque restaurants. A majority of Dallasites will have this park mecca on their feeds in some capacity, whether it’s a selfie with a monstrous ice cream cone or a photo of a park concert.
2012 Woodall Rodgers Freeway

Instagram
White Rock Lake
Whether it’s paddle boarding with your pup or biking along the sidewalk that encircles the lake, lots of action shot opportunities are here. As Dallas isn’t boasting oceanside views, White Rock Lake is our water oasis, and folks are pretty darn proud of it.
N. Buckner Blvd. and E. Northwest Highway 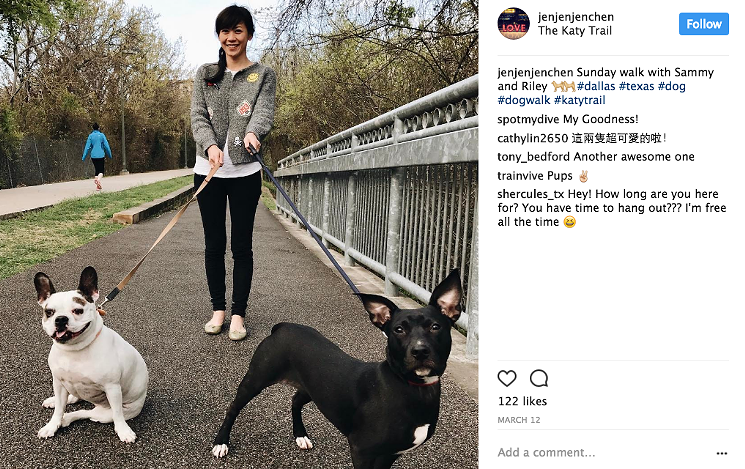 Instagram
Katy Trail
You never know whom you’ll spy on the Katy Trail. With in-line skaters, unicyclists and even pet pigs, it’s a mixed-bag free-for-all on the trail. For folks wishing to look sporty and active, yet social, this is a prime spot to capture the essence of all that.