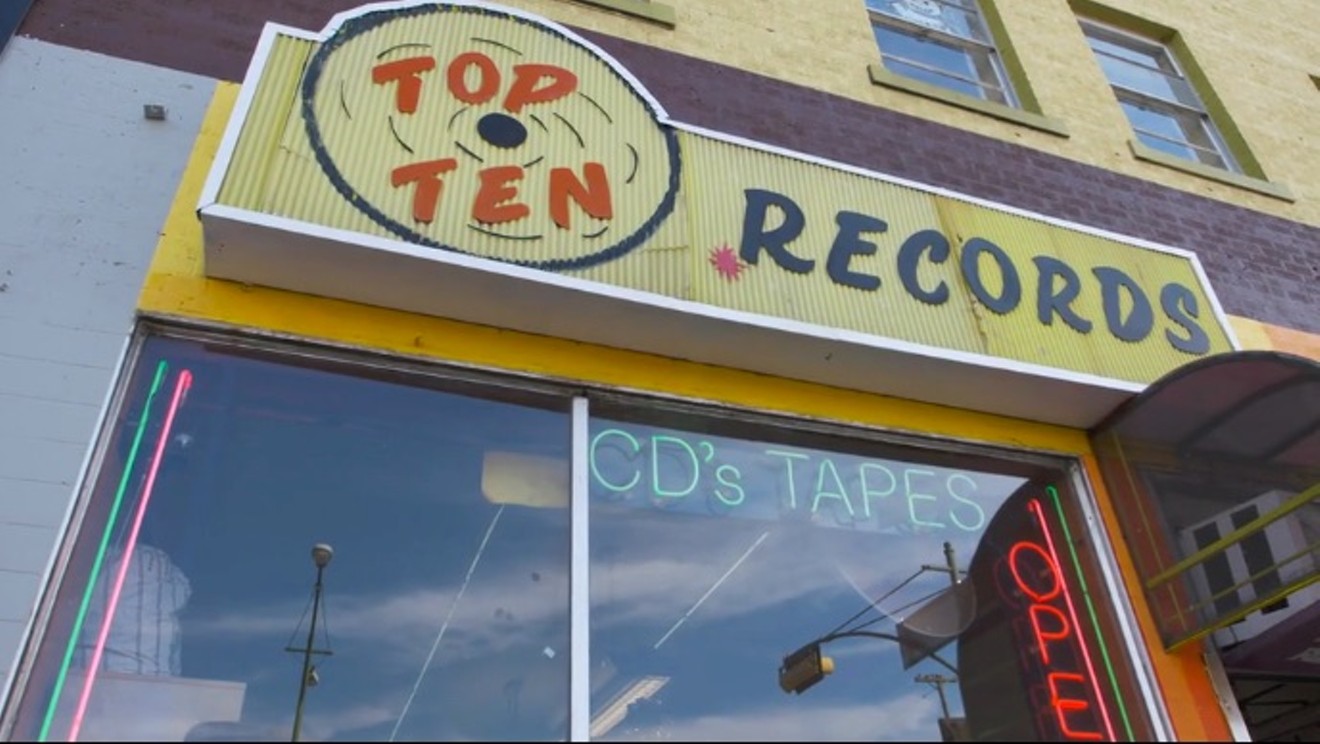 A fundraising effort hopes to turn the Top Ten Records store in Oak Cliff into a state-of-the-art, nonprofit music archive. Screenshot by Danny Gallagher
Several local record shops that focus on vinyl, such as Josey, Good Records and Spinster, are managing to thrive in the age of streaming; meanwhile Dallas’ oldest store, which has specialized in CDs for the last two decades, is struggling to keep its doors open. But Top Ten Records on West Jefferson Boulevard in Oak Cliff, made famous by its connection to the Kennedy assassination, may receive a second chance at life thanks to its neighbors at the Texas Theatre.

“I’ve been thinking that it was time to move on — to either close the store or sell it,” owner Mike Polk says. Top Ten opened in 1956 but it became infamous seven years later as the place where Dallas Police officer J.R. Tippit was last seen making a phone call before he was shot by Lee Harvey Oswald, who had shot and killed President John F. Kennedy earlier that day.

But Top Ten Records also has a small but loyal customer base who enjoy its collection of heavy metal, gospel and Tejano, and so will miss the shop if it shutters for completely non-historical reasons. Barak Epstein — the president of Aviation Cinemas, which operates the Texas Theatre a few doors down on Jefferson — has counted himself among this group since Aviation took over the theater six years ago.

“I got the vibe that he wasn’t on planning on being there forever,” Epstein says, adding that Polk is the nicest guy in the world. “So for the past year, we’ve been talking about a possible succession plan for Mike and that it might make sense to convert the store into a nonprofit, community-run record store and a media archive and he was all for it.”

Epstein and Polk took the first step toward converting Top Ten Records into a nonprofit media archive when they launched an IndieGoGo fundraising campaign last week. If the store is successful in raising $40,000, they say they will achieve their vision by April.

The idea is for the store to function like a music library, where members could check out CDs or cassettes. The archive would also be accessible online. A big chunk of the $40,000 would be used to purchase more music and videos for it, and the collection would also be bolstered by a partnership with Southern Methodist University’s G. Williams Jones Film and Video Collection.

“The store has always been a store for the community already,” Epstein says. “They’ve always listened to what the community wanted and changed with the times. They started doing rockabilly and oldies, then they changed to heavy metal, gospel and Tejano — from 45s to tapes to CDs. [They’ve] always carried local music, which was a big deal for Mike. So we want to continue that legacy going forward and have a lot of local stuff but from all different sorts of genres.”

Polk would also stay on with the store as a member of the nonprofit’s board of directors. He’s enthusiastic about the plan to reinvent Top Ten Records and renew its relevance in the 21st century.

“I’ve had several people talk to me about buying, but in the music industry, stores don’t exist unless you go all vinyl. In the last 20 years, all we’ve carried is CDs and movies, so I was interested in doing vinyl,” Polk says. “I’m really happy because there’s no doubt in my mind that they’re gonna [succeed].”