Settle Up: Seek Out Deliciously Nerdy Cocktails at Hide in Deep Ellum 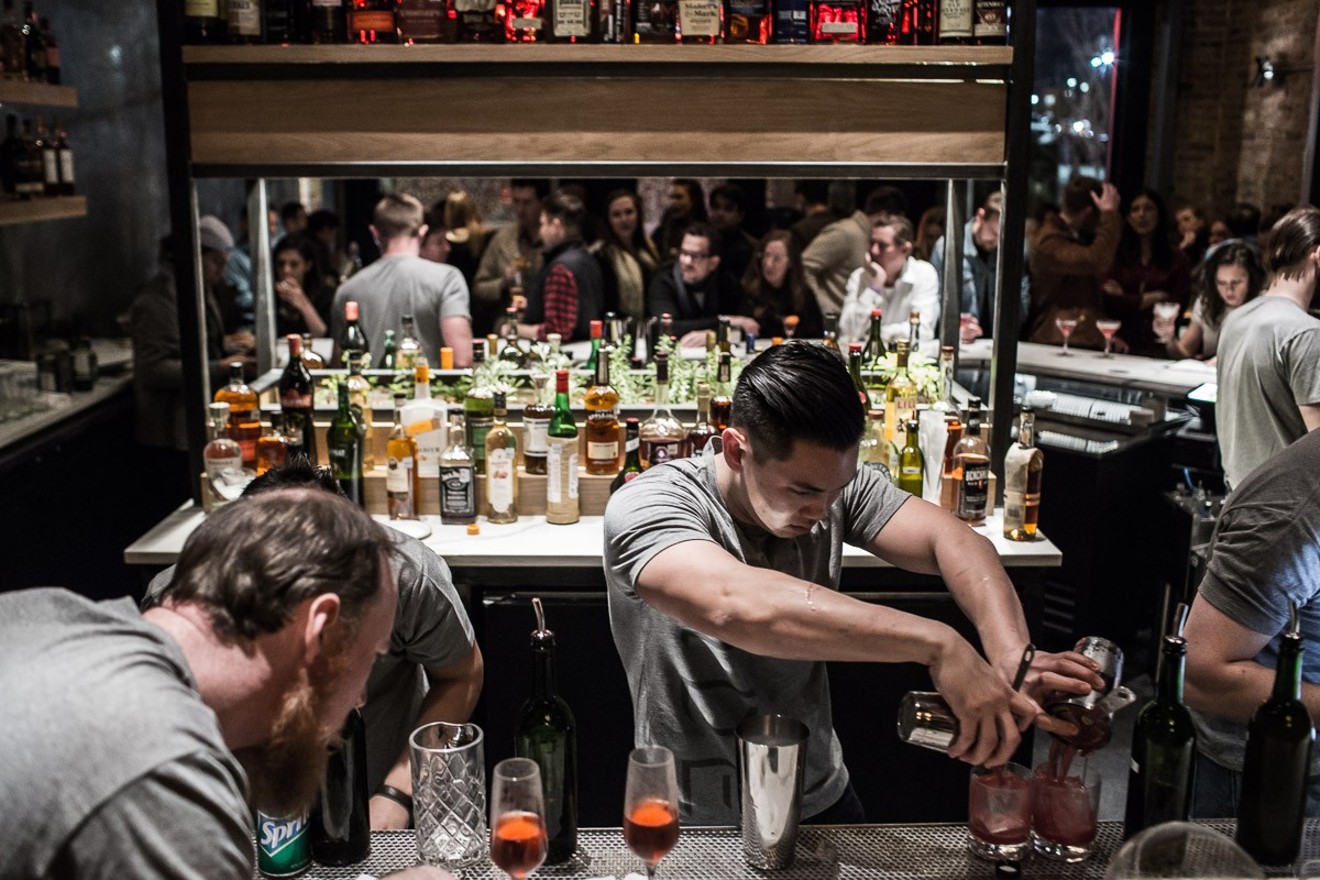 The bar at Hide is well-lighted, giving drinkers the opportunity to see a bit of what goes into these intriguing cocktails. Melissa Hennings
Settle Up is a column that critiques cocktail bars with the same gravitas that food critics apply to restaurants, exploring Dallas cocktail concepts, menus, execution and service and steering discerning imbibers toward all the booze that’s fit to drink.

On a recent afternoon at Hide, I was sitting at the bar enjoying some crispy ahi poke tacos and a bubbly gin and tonic served in a Champagne flute. The sun was shining through the floor-to-ceiling windows, the behind-the-bar herb garden was ripe for the picking, and I just kept thinking: This is living. It’s a sunny thought I haven’t had at other Deep Ellum cocktail dens, probably because they tend to take the term so literally — most don’t even have windows.

While I could go on much longer about the windows at Hide, the magic is in the drinks. The cocktails are made using nerdy techniques and have surprising presentations and bold spices. The bartenders use tools such as centrifuges, lasers and roto-vaporizers to purify and intensify the taste of ingredients. It sounds gimmicky, but the owners purposely stash most of the equipment in the back so the chemistry doesn’t distract from the drinks.

You won't spot much of the technology used at Hide, but you will occasionally witness bartenders using machines like this one, which injects the gin and tonic with high-grade carbon dioxide to carbonate the drink.
Melissa Hennings
Even without the high-tech gear on display, guests often ooh and ahh at how the drinks are served. Take the Wild Hare ($12) for example. This ruby-colored original includes port and carrot gin, a whole lot of assertive cumin and is garnished with a ribbon of bright orange carrot. On one visit, I saw a nice stranger slide it over to a curious neighbor and offer a sip. (Note: You probably shouldn’t accept drinks from strangers.)

The menu tends to undersell and over-deliver. A real standout is the deceptively named sour ($10), which sounds like a simple classic but actually includes seven ingredients. One of those is refreshing eucalyptus, as in the plant koalas eat. After downing a few of these frothy, pale green drinks you will probably conclude that koalas have the right idea.

Other classics are not what they seem. The martini ($10) includes a splash of orange liqueur. (Request the lemon twist instead of the olive garnish for this citrusy variation.) The Southside ($10) is topped with a fresh grind of black pepper to wake you up when you bring it to your nose. The old fashioned ($11) is served in a pint-sized whiskey bottle with an orange peel and cherry garnish carefully inserted into the bottleneck with a pair of long tweezers.

Hide has a selection of carbonated cocktails featuring everything from cardamom tincture to milk-washed Darjeeling tea vodka to Champagne acid.
Melissa Hennings
The gin and tonic ($11) is one of Hide’s unique carbonated drinks. Bartenders don’t normally shake fizzy cocktails because they would explode, but at Hide, they use a special clear shaker that is sealed and pressurized with carbon dioxide. Shaking a carbonated drink like this ensures all the elements are well mixed, super aerated and ice-cold, which makes the gin and tonic taste uniform from the first sip to the last.

A bartender pours Hide's signature gin and tonic, a must-try at this bright cocktail den.
Melissa Hennings
While most of the drinks warrant multiple rounds, a couple are more one-and-done, perhaps because they seem better suited as ingredients in something else than standalone cocktails. Tally Man ($11), for example, contains rum and clarified banana juice; Blind Date ($11) contains rye and clarified date juice. That’s it: spirit and sugar. They are translucent and pretty to look at poured over a big ice cube, but they taste one-note, like they are missing an element, perhaps a dash of bitters. Or they could be better suited as a component to another cocktail. May I suggest plunking them into the mai tai ($12)?

And there is one thing at Hide that bugs me: the shoes, which appeared at eye-level — on top of the bar next to the bottle of Tito’s — on a recent visit. I watched a bartender leap up and down onto the bartop, grabbing bottles of alcohol from high up on a shelf. Sometimes a second bartender joined him atop the slick white bar, and they snatched and passed bottles as if they were performing a circus act.

I’ve witnessed the same behavior on multiple visits, which seems to imply this is standard operating procedure. The practice is at best inefficient — it’s a lot easier and faster to make drinks if the bottles you use are within reach — and at worst dangerous and gross. Imagine peering into an open kitchen and seeing a cook standing on a cutting board.

Hide is not the only bar in Dallas where bartenders hop up onto the bartop to reach things, but it seems like a graver sin here, where every other move is so deliberate. Hopefully the wannabe Flying Graysons will end their antics soon and invest in one of those sophisticated inventions called a ladder. Until then, I’ll savor my sour while facing the windows.