Agave aficionados Taylor Samuels (left), Leigh Kvetko and Shad Kvetko are turning their private mezcal social club into the city's first true-blue mezcaleria, which opens this summer in Expo Park. Beth Rankin
Outside the front door was no noticeable signage, just a small green lightbulb. When it was lit — so long as you came invited and with a bottle of mezcal in hand — you could enter a small, candlelit room that felt more like a small Mexican church than a private bar. During its brief tenure on Davis Street, some of those in the know (ourselves included) errantly called it a "secret mezcal bar." Las Almas Rotas' first home was a private social club and event space on Davis Street in Oak Cliff.
Beth Rankin
If you were privileged enough to make it into the old Las Almas Rotas (translation: the broken souls) at the edge of Bishop Arts, it did feel like a secret mezcal bar, save for the fact that no money was exchanged — during its short tenure, it was only open once or twice a week as a private event space that became the de facto home of a group of agave aficionados who referred to themselves as the Mezcal Cartel.

"Really what we would do is meet at people’s houses — basically everybody would bring a bottle over and the host would cook," says Shad Kvetko, one of the owners of Las Almas Rotas. "It was just a fun, inexpensive way to try a bunch of mezcal. We’ve never been like the pinky-tasting wine groups; it’s always been kind of raucous and all that jazz."

Eventually, Mezcal Cartel tastings moved to the space on Davis Street, where Kvetko, his wife, Leigh, and their friend Taylor Samuels would wax poetic about one day opening a mezcaleria. As word of Las Almas Rotas spread among their network of friends, the trio realized there was serious demand for a bar specializing in Mexican spirits.

The Oak Cliff residents dreamed of opening the bar in their neighborhood, but Oak Cliff's stringent liquor laws drove them to look for spaces in other parts of the city. They eventually found a home in the Expo Park space that used to be the punk rock bar and laundromat Bar of Soap. Las Almas Rotas, a full-fledged mezcaleria serving shareable Mexican snacks, is scheduled to open to the public in July.

"I don't know too many people that have really gone about opening a bar this way," Kvetko says. "We’re not industry people; none of us come from that background."

Shad Kvetko is an antiques dealer working mainly in midcentury modern pieces, and Leigh Kvetko is a graphic designer. Samuels, who's been bartending at Bar Belmont for the last several months, has the most spirit experience of the group; his family founded Maker's Mark, which his brother still runs. 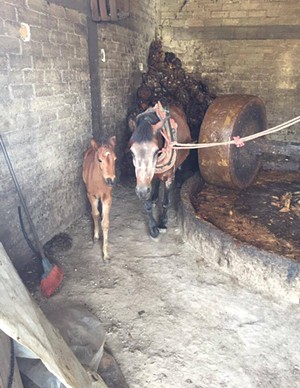 On a visit to family-owned distilleries in Mexico, Shad Kvetko snapped this photo of horses pulling the stone wheel used to crush the cooked agave.
Courtesy of Shad Kvetko
All three of them have a deep-seated love of mezcal — sip a bottle with Shad Kvetko, and he's likely to scroll through his phone, sharing photos of several trips he's made to family-owned mezcal distilleries in Mexico. At some of the distilleries, families still produce the spirit — made from agave — in clay pots and using horses to pull the stone tahona used to crush the cooked agave. For Las Almas Rotas' owners, mezcal is so much more than just liquor.

"When you drink mezcal, you're not drinking a liquor, you’re drinking Mexican culture and spirit," Kvetko says. "There’s something almost spiritual about it."

That spiritual vibe will be evident in the final Las Almas Rotas space, which Samuels and the Kvetkos are renovating, exposing the former Bar of Soap's old murals, exposed brickwork and worn shiplap. They aim to create a cozy, candle-lit space that respects the reverence of mezcal.

"I want it to be transportive," Shad says. "I want to take people out of Dallas and enter Mexico or basically a fantasy of what we’d want to find, influenced by what we had been to and seen in Mexico and Austin."

Las Almas Rotas won't be a typical Dallas cocktail bar. While there will be cocktails served in the front room, drinkers will be encouraged to sip spirits straight.

"We’re gonna try to get people to enjoy the spirits straight because you can have such a huge variety of flavor profiles — that’s the beauty of the spirit," Shad says.

While their library of spirits will be meant to sip straight, this isn't a place to throw down shots, Samuels says.

"In Mexico, they don't slam their Mexican spirits because it's a beautiful, handcrafted spirit and it’s got amazing terroir and botanicals," Samuels says. "We really want to change the conversation about Mexican spirits and how they’re presented in the marketplace." The former Bar of Soap in Expo Park will soon become Las Almas Rotas, Dallas' first mezcaleria.
Beth Rankin
Along with mezcal, the bar will serve other artisanal mexican spirits like sotol and heritage corn whiskey. They'll also serve a small menu of shareable dishes like tamales and tacos.

Las Almas Rotas' owners are aware that Expo Park is a neighborhood in flux. The nearby juice bar recently shuttered, and the craft beer bar on the corner, Craft & Growler, was recently sold. Owners are concerned about a customer drop-off during the State Fair of Texas, when the neighborhood floods with fair-goers and getting to the area can be tricky. But being such a niche bar, Samuels says, may actually work in their favor.

"I think because we’re off the beaten path, we’re able to curate the experience a little more," Samuels says. "People that are going to be here are going to make an effort to get here. It’s going to be very intentional."

Mezcal is by no means a cheap spirit; Samuels says most pours will range from $7 to $40 each. And there are some environmental and socioeconomic concerns, like agave shortages in Mexico. The current political climate also poses challenges. A pour of mezcal photographed with cactus at the preview party for the forthcoming Las Almas Rotas, opening in July.
Beth Rankin
"With the rhetoric with the current administration and Mexico, it kinda scares me," Shad says. "It wouldn’t even just take building an actual wall; just a trade war. The prices are so high anyway that it’s scary that they could start implementing tariffs."

But challenges aside, this trio hopes the bar will be just as much of an education experience as a watering hole.

"This is a passion for us and we’re just gonna go for it," Shad says. "I really want to give back to the villages and the mezcaleros because good God, after seeing the labor that goes into it, it really is back-breaking labor to go into producing mezcal. There's a lot easier ways to make money."

And certainly there are a lot easier ways to make money than by opening a mezcaleria in Expo Park.

"Our mission is to educate people," Shad says, "and hopefully inspire more people to delve into Mexican spirits — and maybe even inspire people to travel to Mexico and see it for themselves."