If all goes according to plan, this space adjacent to Set & Co., in the same plaza as Davis Street Espresso, will eventually become Tiny Victories, a cocktail bar from part of the team behind Wayward Sons. Beth Rankin
Come late spring, the “damp” neighborhood of Oak Cliff could have a full-blown bar at North Tyler and West Davis streets.

But for now, it will be one small battle at a time until Tiny Victories can open its doors, as long as its space is successfully rezoned.

“We secured a lease, but within that we have to get the approval of the SUP process, which is a very diligent process with that neighborhood, especially. But now we won’t have a yes or no on this space until mid-April,” says Brandon Hays, who’s working on the project with Phil Schanbaum.

In this neighborhood, designated “damp,” establishments that serve liquor must earn 51 percent of their revenue from food unless they have a Specific Use Permit — which means that, currently, the bars in Oak Cliff all have full kitchens and are technically restaurants with bars, not the other way around. Tiny Victories hopes to change that, at least for itself. The bar’s first public City Hall hearing on its permits is slated to happen in February.

“The special [specific] use permit process we’re going through will be for 100 percent alcohol,” Hays says. “We want to provide some kind of bar snack, but our revenue will be generated through alcohol.”

While there is a process ahead, District 1 City Council member Scott Griggs says that less than 10 years ago, this would be a different story. A local option election in 2010 allowed restaurants in the area to have on-premise consumption of alcohol without requiring a private club license. Before that vote, Oak Cliff was dry.

“You had to use the Unicard; we didn’t have as many restaurants, then everything started taking off once you could have alcohol at restaurants,” says Griggs, whose district includes Oak Cliff. “It changed dramatically, particularly the large influx of restaurants in Oak Cliff.”

Griggs isn’t familiar with this particular case, but he expects the community will provide feedback.

“Every zoning case in North Oak Cliff is controversial,” he says. “People are involved, which is really good; it’s a very democratic process. … Everyone’s got a great idea on how to make applications and things better.”

And the people behind Tiny Victories welcome that.

Taped on the window next to the “Proposed rezoning” sign on the future potential bar is an amicable letter from David Spence — who renovated the space and leases it out — discussing the owners, the size of the space (1,250 square feet, including the outdoor patio) and how “Tiny Victories will provide a respectable place for gathering, entertaining and relaxing.”

“We can only provide four walls, decor and then try to provide quality product with some integrity behind it,” Hays says. “We’ve already talked to some of our neighbors in the area, and we want to meet as many people as we can, because we want to give a face to it. When people just hear there’s a bar, that’s one thing. When they actually meet us and know what kind of businesses we’ve run, they know our goal … to have a quality place where people can enjoy themselves in the neighborhood.”

This part of Dallas is just the next step.

“[It drew us for] the same reason Design District did, Greenville Avenue, Henderson, McKinney Avenue, many different businesses in different areas of town,” he says. “I think that’s just our overall enjoyment in the city of Dallas. The city of Dallas is so diverse and offers so many opportunities.”

Hays says the goal of Tiny Victories is, in and of itself, a tiny victory: to become a neighborhood hang.

“I mean, drinks are drinks. We think we bring a special brand of hospitality, which is kind of different than what others try to do,” he says. “We’re serving booze and shaking hands and trying to provide an environment where people can have a good time.”

You can read Spence’s full statement posted on the door of Tiny Victories below: 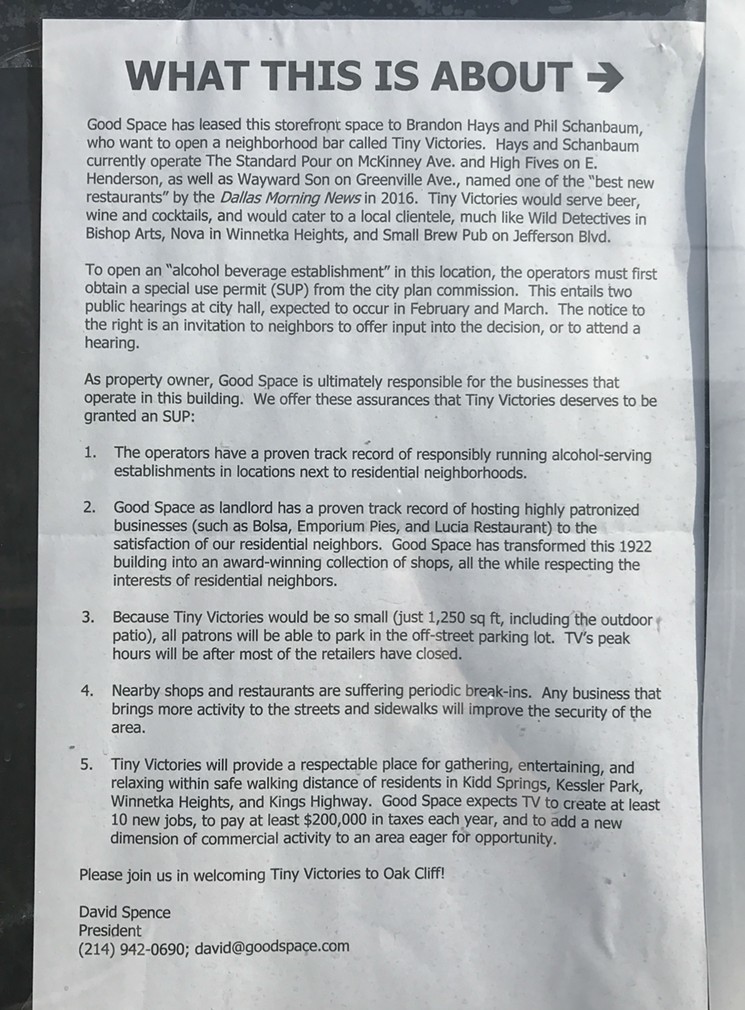 A letter from David Spence posted on the door of what is slated to become Tiny Victories, Oak Cliff's first full-blown cocktail bar.
Beth Rankin
KEEP THE DALLAS OBSERVER FREE... Since we started the Dallas Observer, it has been defined as the free, independent voice of Dallas, and we'd like to keep it that way. With local media under siege, it's more important than ever for us to rally support behind funding our local journalism. You can help by participating in our "I Support" program, allowing us to keep offering readers access to our incisive coverage of local news, food and culture with no paywalls.
Make a one-time donation today for as little as $1.