From Bond Villains To Mr. Burns, All the Famous Bad Guys Elon Musk Has Ripped Off 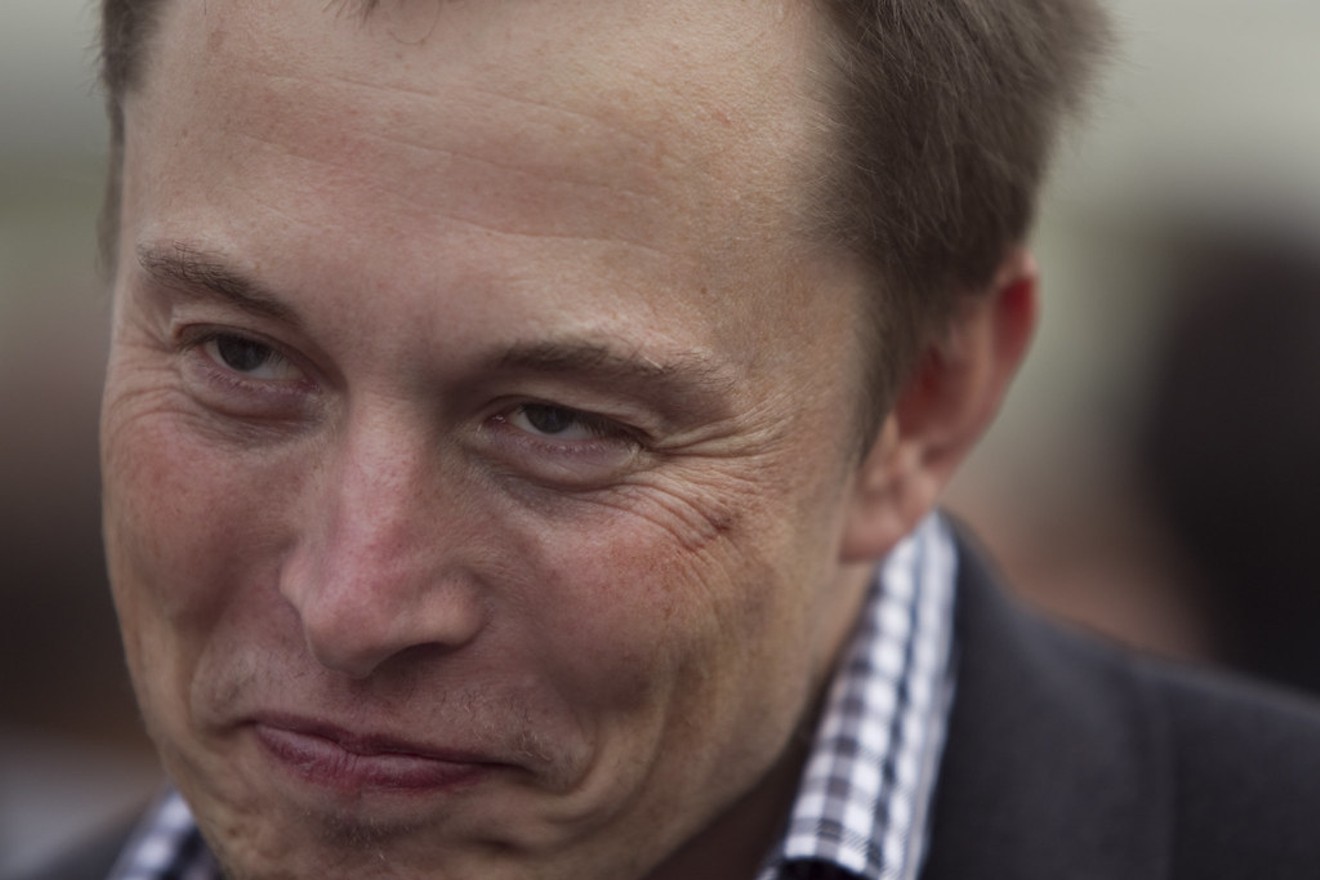 It's not your imagination: Elon Musk is beginning to sound a lot like Mr. Burns. "Elon Musk at Tesla Factory" by Wired Photostream is marked with CC BY-NC 2.0.
Let’s face it: We all need to spend less time on social media. While it’s nice to stay updated on current events, check in on high-school friends and check out your daily #GetWell accounts, spending hours scrolling through your feed isn’t going to make you smarter, more informed or happier.

As if we didn’t need another reason to ditch Twitter entirely, the world’s most aggressive social media platform has now fallen under the domain of the world’s most idiosyncratic billionaire. At an asking price of $44 billion, Elon Musk has taken control of everybody’s feeds, and he's already spewing out more of his usual nonsense. Whether this is simply an excuse to sell Tesla stock, a random side purchase from someone with way too much wealth on his hands or the first part of his plan for world domination is unclear.

Musk has already started enacting some pretty strange policies. Citing concerns that advertisers might be ditching the platform entirely, Musk has come up with a strategy of starting an $8 monthly fee for verified celebrities and public officials to pay for their “blue check marks.” Of course, there's no tax scale in Twitter, and Musk is expecting Ryan Reynolds to pay the same amount as your local weatherman.

The policy has already generated blowback from some of Musk’s vocal critics, including noted horror author Stephen King. Anybody who scares Stephen King is someone we should definitely be worried about.

But Musk has always been a very strange sort of pseudo-celebrity. Perhaps he and Mark Zuckerberg come from the same planet, but at least Zuckerberg isn’t trying so hard to fashion himself as a hip participant of popular culture. With seemingly unlimited resources and a massive ego, Musk has descended into levels of villainy that are almost cartoonish. In fact, we think that he’s blatantly ripping off some pretty famous screen villains. Here are 10 pop culture villain who have probably inspired Elon Musk.

1. Elliot Carver in Tomorrow Never Dies
Musk’s idea of a monopoly on public information is hardly original. If you remember the second installment of Pierce Brosnan’s James Bond series, Tomorrow Never Dies, the villainous media tycoon Elliot Carver (Jonathan Pryce) controls a powerful news empire that filters recent events through his subjective lens. Since it’s a Bond movie, Carver goes to the extreme to try to start a war in order to grab some headlines.

That’s not even where the similarities with Musk end. Carver also has some pretty strange technological indulgences and designs unusual vehicles that appeal only to the upper class. He also has a giant portrait of himself that hangs off a skyscraper. He may have an ego that rivals Musk’s.

2. Hugo Drax in Moonraker
Elliot Carver isn’t the first James Bond villain from whom Musk seems to draw inspiration. If you go back to Roger Moore’s 1979 Bond film Moonraker, you’ll find another egocentric billionaire with an interest in rocket technology. The humorless businessman Hugo Drax (Michael Lonsdale) invests in a massive space station that will allow his “superior race” to fly above the Earth’s atmosphere. He’s not just selfish; Drax plans to wipe out the rest of life on Earth, and it’s up to 007 to stop him. While Musk hasn’t declared that he intends to annihilate life on Earth (at least not yet), he’s already planning to leave the planet with his SpaceX technology. Perhaps, if Musk does board an interstellar flight, he can go back to whatever alien planet he came from.

3. King Joffrey Baratheon in Game of Thrones
Apparently, Musk is a Game of Thrones fan, as he visited the set of the eighth season to drop in on filming. Perhaps, he is in part to blame for the disastrous final chapter of the epic HBO series. Musk hasn’t yet revealed his favorite character from George R.R. Martin’s fictional universe yet, but he may not be the beloved hero he seems to think he is. Despite his endless past complaints over social media "free speech censorship," recently Musk has taken to shutting down Twitter accounts belonging to impersonators who are mimicking his account. It’s a strikingly similar move to that of GOT's spoiled King Joffrey Baratheon, who sent his critics to face public execution.

4. Benjamin Kane in Wayne’s World
Musk isn’t the first over-the-top bad guy who has tried to transform social media into a source of profit. Thus far, he’s done his best to erode any sense of creativity or originality and replace it with boring, mundane business discussion. He seems like the kind of guy who would try to turn Wayne (Mike Myers) and Garth (Dana Carvey) into corporate sponsors, which is exactly what Rob Lowe’s character does in the original Wayne’s World.

5. Peter Isherwell in Don’t Look Up
Perhaps Musk’s reign has inadvertently served as inspiration for some more recent movie bad guys. In last year’s Netflix comedy Don’t Look Up, the tech billionaire Peter Isherwell (Mark Rylance) uses his influence within the federal government to prevent the U.S. from stopping an asteroid strike. Of course, Isherwell manages to escape the planet’s destruction when he boards an interstellar vessel during the film’s conclusion. Rylance’s impression of a Musk-esque tycoon is downright uncanny.

6. Nolan Sorrento in Ready Player One
In this nostalgia-fueled sci-fi adventure, the villainous tech tycoon Nolan Sorrento (Ben Mendelsohn) takes the digital reality platform OASIS and inserts obnoxious advertising functions. What was originally designed to be a virtual paradise has turned into just another entertainment conglomerate. Thankfully, the heroes in Ready Player One are able to rise up and beat Sorrento at his own game. Let's hope a similar resistance force will stop Musk from enacting a similar policy on Twitter.

8. Lord Farquad in Shrek
Do all of Musk’s public tantrums stem from some sort of inferiority complex? Musk likes to criticize others, but he has no sense of humor about his own weirdness. Musk could use a lesson in humility. Perhaps we just think “little of him,” like the over-the-top English autocrat in the original Shrek film.

9. Lou Bloom in Nightcrawler
Jake Gyllenhaal delivered the best performance of his career in this social satire about a rogue media reporter who goes out of his way to investigate violent crimes. Lou Bloom only cares about spectacle, and he’s not worried about collateral damage in the slightest. There’s an uncanny, inhuman quality to Gyllenhaal’s performance that is virtually identical to Musk’s voice. In fact, the Bloom quote, “If you want to win the lottery, you have to make the money to buy a ticket,” seems like something Musk would say.

10. Mr. Burns in The Simpsons
It wasn’t enough for Musk to ruin Twitter, space exploration, tunnel construction and electric vehicles; he also appeared in one of the worst episodes of The Simpsons ever. While The Simpsons has never recaptured the lightning in a bottle of its early seasons, the season 26 episode “The Man Who Fell To Earth” marked a new low. Musk appears as himself in an episode that's essentially an extended bit of advertising. Ironically, Musk aligns himself with Mr. Burns in the episode. It’s not surprising that two cold, disconnected billionaires who work their staffs to death would be friends.
KEEP THE DALLAS OBSERVER FREE... Since we started the Dallas Observer, it has been defined as the free, independent voice of Dallas, and we'd like to keep it that way. With local media under siege, it's more important than ever for us to rally support behind funding our local journalism. You can help by participating in our "I Support" program, allowing us to keep offering readers access to our incisive coverage of local news, food and culture with no paywalls.
Make a one-time donation today for as little as $1.