Hoochie Daddy Shorts Are Summer’s Hottest Trend, So There's That 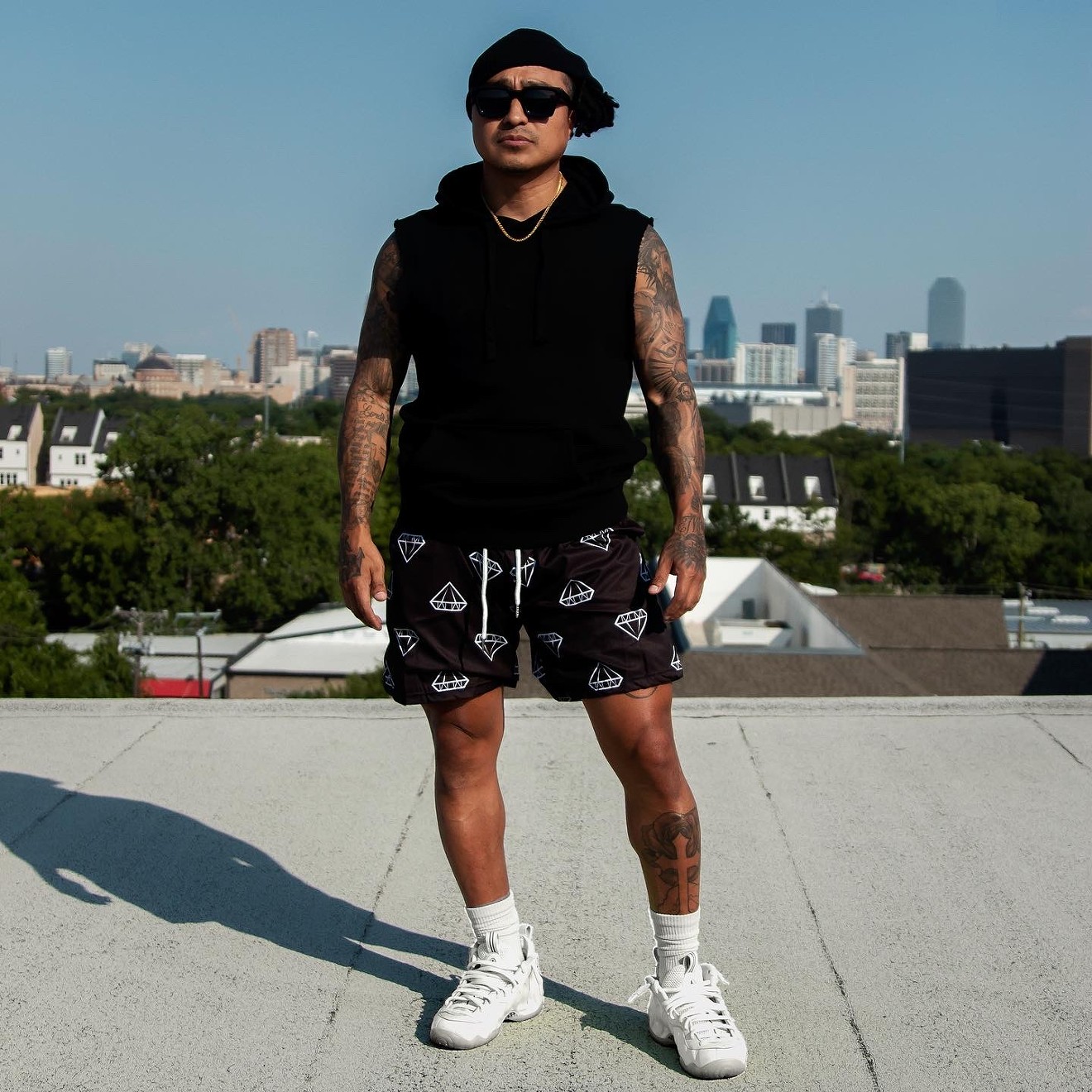 Get ready to see some serious leg, because it's a hoochie daddy shorts summer. Miguel Contreras
You ain’t nothin' but a hoochie ... daddy. Surely, 2 Live Crew did not expect their 1995 song would apply so perfectly to 2022 men's fashion, but here we are. This summer, hoochie daddies are taking over, and they have the perfect accessory: shorts cut above the knee, aka "hoochie daddy shorts."

Last month, Texas City podcaster Ainsley Turner went viral on TikTok with 3.9 million views on a breakdown of the hoochie daddy shorts trend and the rules that come with them.

According to Turner, toned legs and lotion are a must for this trend. She advises men to avoid denim and baggy fabrics, and points out Dallas designer Kendall White as a hoochie shorts wearer who is doing it right.

White, who is shown in the TikTok in red Nike shorts, became the ultimate hoochie daddy shorts exemplar— even though actor Milo Ventimiglia invented men's thighs, just saying. Slay Magazine credits White for sparking the Nike hoochie daddy shorts trend specifically, however, and made a call on Twitter for Nike to take on White as an influencer for the brand.

@Nike have you seen the #hoochiedaddyshorts Designer Ken White definitely SLAYed and kicked the movement in his @Nike shorts! He needs to be a @Nike Influencer. His IG is @kendrell.white pic.twitter.com/661AbcdKyt

Dallas personal trainer Francisco Ibarra says anything from a 7-inch inseam and under would be above the knee and qualify as hoochie daddy shorts. Typically, 5-inch inseams would show thigh and 3-inch inseams would be “short-short short.” He says the 3-inch shorts are typically reserved for cross-country training and not streetwear fashion.

Ibarra has been rocking hoochie daddy shorts for at least two years. His Instagram shows him sporting the trend as early as summer 2020.

For Ibarra, the trend is about confidence.

“The people who were very macho, very manly, who would say, ‘Bro, you’re looking very feminine in that,’ or whatever, and honestly, I'm very confident in myself and those comments are irrelevant to me,” Ibarra says. “It is not going to stop me from wearing what I want or what I like.”

Ibarra has long been ahead of fashion. He remembers wearing pink before it became a staple in men's clothing in the 2000s, and wearing Jordan Ones consistently before they re-emerged as hot sellers.

His predilection for shorty shorts is rooted in watching his brother’s style in the ‘80s. The hoochie daddy shorts are just another part of fashion’s cyclical nature. In the late '70s and ‘80s actors such as John Travolta made short men’s shorts a fashion staple. Many will recall Travolta as Grease’s Danny Zuko in a Rydell High T-shirt and white hoochie daddy shorts. Upon closer inspection, we can see why that trend would make its way into the 21st century.

“Two and a half years ago, I took a step forward and started playing with 7-inch inseam shorts and I just started rocking them and I would get looks from people,” Ibarra says. “Friends would say ‘I'm not gonna jump on that trend’ and all the people that were talking nonsense are now all wearing them.”

He prides himself on not following trends but letting his own preferences guide his fashion choices. Ibarra says even hoochie daddy shorts can be a means of empowering other men to find confidence within themselves.

This summer, Ibarra became the face of MM Jewelers' hoochie daddy shorts, part of their merch line for pop-up markets and e-commerce. MM Jewelers owners Miguel Contreras and Sachina Shrestha noticed their target demographic embracing the fashion trend last year through trendsetters like Ibarra. They developed a concept last summer for branded hoochie daddy shorts and released them this year. Once they went up online, all sizes — small through extra large — sold out in five days.

Like Ibarra, Contreras aims to stay ahead of the trends, which has proven monumentally successful in brand development, he says. His company has a niche focus on sneaker conventions. Contreras says that hoochie daddy shorts are most popular among 16 to 34 year olds keen on streetwear. The go-to streetwear outfit for men includes hoochie daddy shorts, an oversized shirt and Cuban link bracelets or chains. The shorts are the first step into fashion freedom by moving away from gender confines.

“Everything's starting to become more neutral, which is a good thing,” Contreras says.

Tennis bracelets and necklaces, once reserved for women’s fashion, have become popular for men according to MM Jewelers. With fashion becoming gender fluid, Contreras sees 1980s-style crop tops for men on the horizon.

“It's all about how you portray yourself at the end of the day,” Contreras says.

“If you like it, wear it,” Ibarra says. “It doesn't matter the color. It doesn't matter if it's a trend. If you like what you see in the mirror and if it looks good on you, you should wear it. If you step out of the box, your confidence level will be up.”
KEEP THE DALLAS OBSERVER FREE... Since we started the Dallas Observer, it has been defined as the free, independent voice of Dallas, and we'd like to keep it that way. With local media under siege, it's more important than ever for us to rally support behind funding our local journalism. You can help by participating in our "I Support" program, allowing us to keep offering readers access to our incisive coverage of local news, food and culture with no paywalls.
Make a one-time donation today for as little as $1.