Wrestlers battled to death, sort of, at a Texas Style Wrestling match on Saturday. Nick White
There is a new independent wrestling promoter in town, and it's promising it'll give wrestling fans an experience that'll stay true to the roots of professional wrestling in Texas.

Texas Style Wrestling launched in December and hosted just their third live event this past Saturday night at the TSW Studios in Addison. Although the promoter is new to DFW, the company has  entertainment and wrestling experience behind the scenes with which they hope to build Texas Style Wrestling into a success.

Randy Cline, founder and president of Texas Style Wrestling, has years of experience in the entertainment production business, which he sees as something that can set TSW apart from other independent wrestling companies.

“The old-school, Texas-style wrestling is what the fans love. It is my job to present that action in a polished, professional, high-quality production,” Cline says.

Stepping into the TSW Studios on Saturday night, fans could immediately notice the attention to detail that Cline and his team put into production. Their in-house lighting is balanced in a way that keeps the focus on the wrestlers in the ring. The sound of the entrance music is loud and clear and the entrance ramp has a 20-foot LED screen for the wrestler’s name to be showcased for the entire audience to see as the wrestler makes his or her way down to the ring.

“Texas Style Wrestling feels like a big-time promotion," says wrestler Bam Bam Malone, who competed in the opening match. "You walk into the show and the production itself speaks volumes. Other independent wrestling shows just rent a building and set up the ring as fast as they could, whereas we put a lot of thought and emphasis into the small details.” 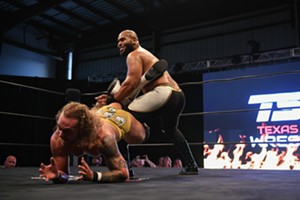 Wrestling fans may have a lot more fights to look forward to in the coming years thanks to Texas Style Wrestling.
Nick White
Bam Bam Malone has been a professional wrestler for seven years. He started his training in high school when he unexpectedly left his school’s football team to pursue his dream of becoming a wrestler. He remembers that his mom had to sign the safety waivers when she dropped him off at wrestling school.

“Our goal is to develop young, up-and-coming talent," says Cline. "Rodney and Jazz at Dogg Pound Wrestling have an eye for that. Their reputations in the wrestling world are solidified.”

A few of the Dogg Pound students who wrestled on Saturday include 90 Day Fiancé star Paola Mayfield, who wrestles as Paola Blaze, and high-flyer Sodapop Hendrix. Both Mayfield and Hendrix started their training in 2020 and debuted for Texas Style Wrestling in April.

There is no shortage of independent wrestling promotions in Dallas-Fort Worth and the rich history of professional wrestling in Texas has been well chronicled. Last April, WWE brought WrestleMania to AT&T Stadium in Arlington, drawing in a reported 158,000 fans. But for wrestling fans who think the price tags on big-time wrestling shows are too high for a family night out, Texas Style Wrestling is hoping to show that there is an affordable alternative to get your fix of headlocks and body slams.
KEEP THE DALLAS OBSERVER FREE... Since we started the Dallas Observer, it has been defined as the free, independent voice of Dallas, and we'd like to keep it that way. With local media under siege, it's more important than ever for us to rally support behind funding our local journalism. You can help by participating in our "I Support" program, allowing us to keep offering readers access to our incisive coverage of local news, food and culture with no paywalls.
Make a one-time donation today for as little as $1.