DFW Rat Rescue adopts and finds loving homes for domesticated rats that founder and co-operator Mary Matthews says are sweet, social and friendly just "like small dogs." Danny Gallagher
Rats have gotten a bad rap. It's true that the wild variety can be aggressive, dirty and spread diseases. They have their own illness named specifically for them, called rat bite fever, according to the Centers for Disease Control and Prevention.

The domesticated rat, however, can be just as cuddly, loyal and friendly as a pet dog, says Mary Matthews, the founder of the nonprofit animal adoption group DFW Rat Rescue.

"You can have rats who look exactly the same and you'll know exactly who is who based on how they come up to the cage, how active they are, how they take food from you and things like that," Matthews says. "They all have their own personalities."

DFW Rat Rescue's Mary Matthews and Ford Wesner have rescued around 2,000 domesticated rats and found homes for all of them.
Danny Gallagher
Matthews and her fiancé, Ford Wesner, have lots of animals at their home in the tiny town of Rhome in Wise County, but domesticated rats easily take up the most space in a well-ventilated shed on the property.


The unique animal adoption and surrender agency has been in operation around North Texas since 2018, prompting the adoption of around 2,000 cuddly rats as pets to loving owners.

"Maybe you live in an apartment that doesn't allow a dog or a cat," Wesner says. "I've got some friends who are allergic to dogs and cats, and rats are the next most social pets. They know their names and they'll play with you. It's not a goldfish."

DFW Rat Rescue can house up to 100 rats at one time. They come from a variety of people and places. On occasion, owners who may have bought a pair of rats from a pet store without knowing that they were a male and female suddenly find themselves with up to 12 more rats. Sometimes pet owners get only one, which is still a little of a handful.

There are very rare instances when the couple had to take on a large load of rat cages from people who were breeding them for snake food, or from animal hoarders. Matthews says her biggest surrender came from San Antonio where an animal hoarder kept 152 rats among other unreasonable large numbers of animals.

DFW Rat Rescue started when Matthews was in college. She grew up around animals and volunteered with animal rescue groups since she was 16, but rats were the only animal her mother didn't allow her to bring into the house.

"She couldn't get over how gross their tails are," Matthews says of her mom. "Everyone thinks they are mean and dirty, but they're cleaner than cats. They spend all the time cleaning themselves and you can litterbox-train them."

Matthews started her first iteration of the nonprofit at her home in The Colony before she met Wesner, who also helps with the daily cleaning and feeding duties to care for the rats. Since then, they've built a dedicated following of 1,500 active members who participate on social media or help with their time or money to keep DFW Rat Rescue running.

"I make sure I'm not adopting my rats to people who are uneducated or (...) if they have medical issues or behavior problems because I'll either trade them up for other ones or give them advice or whatever," Matthews says. "I make sure that they know —  and I put this on my website — that if you're looking for feeder rats, I know people who raise feeder rats and not to feed these to a snake.

"These are people's pets, and they love them and want to take care of them," Matthews adds.

It may sound surprising, but Matthews says rats that have been bred as pets can be sweet, clean and even responsive to their owners — like Lauchlan, a memorable rat Matthews cared for who sticks out in her memory.

"He was super snuggly," Matthew says. "He would fall asleep in my lap and he always wanted to be out with me. He was just a great little guy."
click to enlarge 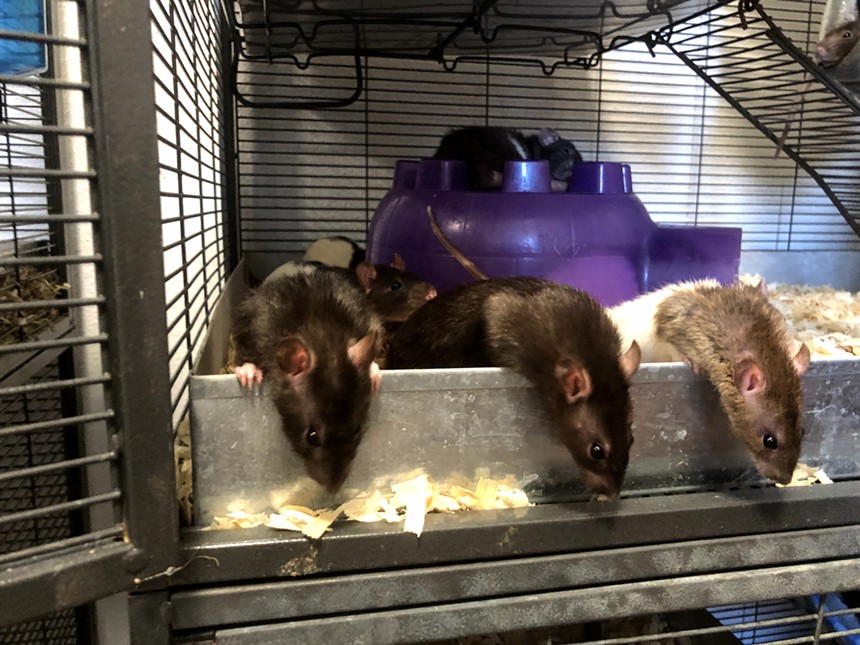 DFW Rat Rescue can house up to 100 domesticated rats at once. The nonprofit says they are highly responsive to their human owners.
Danny Gallagher
KEEP THE DALLAS OBSERVER FREE... Since we started the Dallas Observer, it has been defined as the free, independent voice of Dallas, and we'd like to keep it that way. With local media under siege, it's more important than ever for us to rally support behind funding our local journalism. You can help by participating in our "I Support" program, allowing us to keep offering readers access to our incisive coverage of local news, food and culture with no paywalls.
Make a one-time donation today for as little as $1.