Devin Pike Amanda Rebholz
If you've been to a fan convention, a special movie screening or any gathering of fanboys and girls in a public place, then chances are that you've seen the goateed face or heard the booming voice of Devin Pike.

The host, emcee and program director at the online radio station Fuzz Box has devoted much of his career and free time to make sure the fun flows freely at Fan Days, Infinicon, the Dallas Comic Show and the Alamo Drafthouse.

Pike hosts Q&As with the most famous faces at the conventions, keeps the energy going during costume contests and movie screenings, and does about a billion other things behind the scenes that prevent him from getting much sleep during convention weekends.

"I wouldn't call him the life of the party because the party follows him," says James Wallace, the creative director for Alamo Drafthouse DFW. "The party lives and breathes around Devin. He's Devin. He's one of those people where words don't do him justice. You just go, 'He's Devin,' and people know exactly what you're saying without saying anything."

"All I can think is I know I'm going to get through this, but the level of suck, it's overwhelming." – Devin Pike


Pike was at the Fan Days convention earlier this month, but he has had to cut back on appearances because of his battle with throat cancer. He was first diagnosed in 1994 when he was 23 years old. eventually went into remission.

But last spring, Pike began experiencing some familiar symptoms. A doctor's visit confirmed that the throat tumor had returned. Pike only went public with the news a couple of weeks ago.

He has nicknamed the tumor "Bruce," the name Steven Spielberg and his crew gave the super-annoying, barely function mechanical shark used in the summer movie classic Jaws.

"I've been doing OK," Pike says. "The biggest issue for me has been setting my own expectations. I have long had a problem with overbooking myself and doing far too much, and my family and friends have always said to slow down and that I'm going to be putting myself in ... a position where I'll be in poor health. Now it's not just my body telling me to quit it. It's my body, my and everything." 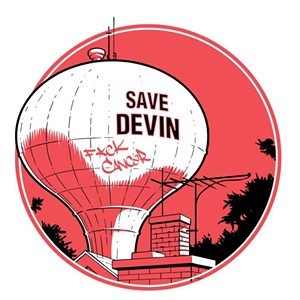 artwork by Matthew Warlick
Pike has already depleted his savings account to pay for treatment. He initially resisted offers from friends to help financially, but now he is cooperating.

First, his close friends started a GoFundMe campaign. At the time of writing, it had raised just over $2,700.

Alamo Drafthouse and a wider circle of friends asked to step in. The theater will host a fundraiser Thursday, Nov. 9, featuring a screening of Ferris Bueller's Day Off. Commemorative "Save Devin" T-shirts designed by local artist Matthew Warlick will be for sale. Half of the proceeds will go to Pike's cancer fund, and half will go to the Cancer Support Community North Texas.

"The level which there this much of an inspiration in the fan community to just muster up and come out with such an intense level of support, that's where you see the real impact when the community rallies around somebody and does what they can in a situation like this," says Cole Houston, a convention organizer who has worked with Devin as the captain of at local conventions such as All-Con and Infinicon. "The level of impact that Devin makes is self-evident in the kind of support we're seeing."

Pike is undergoing chemotherapy and radiation treatments every two weeks. The good news is that Bruce has not grown or spread since Pike's first treatment in June, but it has also not shrunk, so the emcee still has a tough road ahead of him. The medical treatments are painful and expensive, even with a full insurance plan.

"I fake it," Pike says. "I fake all of it. When I went public with it last week, the comments were fantastic. People were saying I was taking it extremely well and my positivity was an inspiration, and I look at it and wonder, how is that even possible?

"I am terrified right now. I shouldn't be because I have a great team working with me and an astonishingly great group of family and friends who are backing me up 100 percent. All I can think is I know I'm going to get through this, but the level of suck, it's overwhelming."

Pike asked the Drafthouse to screen Ferris Bueller's Day Off because it's a favorite that informed his life's philosophy that "life moves pretty fast. If you don't stop and look around once in a while, you might miss it."

It's also a nice reminder of the appearance Pike once made on the Comedy Central game show Win Ben Stein's Money. Before he was eliminated in the second round, he got to hear Stein, who plays Bueller's droll economics teacher, his iconic "Anyone? Anyone?" line.


"The Drafthouse folks have always been extremely supportive of me through the years," Pike says. "They are , really great, and we've had a relationship going back to a year before it opened, and they said, 'We really want to do this for you,' and it's hard for me to accept any kind of help. I'm really stupid stubborn. I'm an absolute jackass when it comes to accepting help from other people, which makes me a bigger hypocrite than it should because I prefer to do charity work and would love to help, and if I can, I'll wind up doing it."

Pike hopes the event will help others defeat their own Bruces.

"The bottom line is I'm stupid lucky," Pike says. "I have a great job with really good benefits, and if I didn't, I don't know if I would have gone in to have my initial symptoms looked at and get the aggressive treatments I have. I know for a fact that if I didn't have these benefits — and so many people don't — asking for help even with all those benefits, I'm still gonna be behind the eight ball. Ninety percent of people who go through cancer treatments are worse off."