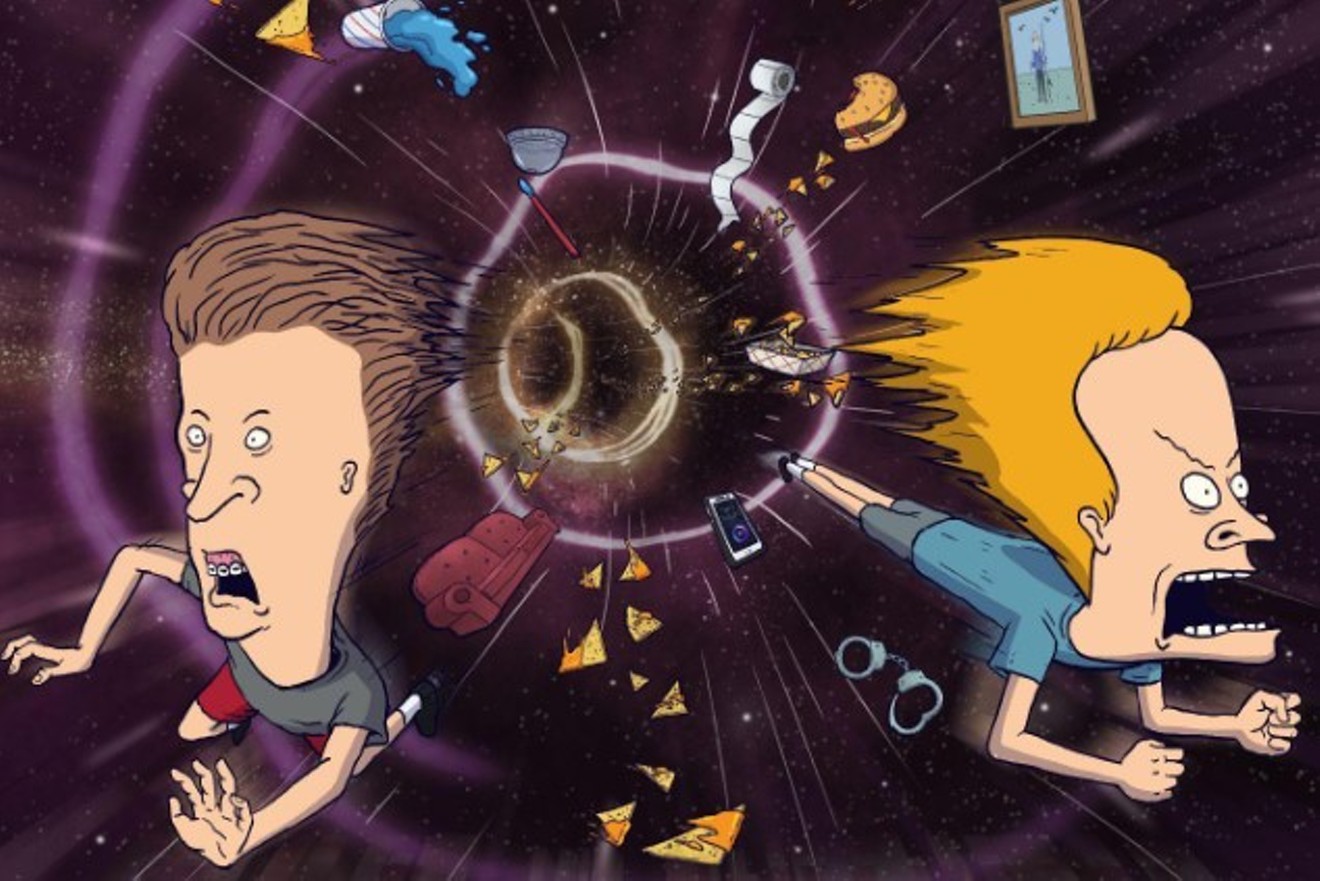 The two beloved idiots are returning for a new adventure. Although they aren’t any smarter, the idiocy of these two sex-obsessed teenage boys actually feels kind of enligtened in the year 2022. What once qualified as “below average intelligence” now feels like a step up.

Beavis and Butt-Head Do The Universe is essentially an extended pilot for the upcoming season. In 1998, the two goofballs accidentally burn down their high school science fair and are placed in a program for “at-risk youths” that is run through the Johnson Space Center. Amidst their adventure, Beavis and Butt-Head accidentally get mixed up with a group of gifted students. They surprisingly manage to “score” an extended internship working on a new space program with the director Serena Ryan (Andrea Savage).

Of course, the only reason Beavis and Butt-Head sign up for the mission is because they think they’re about to “score” with Serena. They’re accidentally transported through a time portal to 2022, where Serena is now the governor of Texas, and she wants to cover up the mistakes of her past. Serena sends assassins to kill Beavis and Butt-Head in order to prevent a scandal from breaking out.

Beavis and Butt-Head are in danger, which of course goes completely over their heads. They spend most of the film trying to find Serena and a portal back to the '90s, which takes them on a statewide trip to some iconic Texas landmarks. It’s hilarious to see these two engage with modern Texas culture. Judge has always been an ardent social critic (just watch Office Space or Idiocracy to see how prophetic he can be), but he really digs his claws into everything that’s wrong with our reality using some specific local references.

When they are in Galveston, Beavis and Butt-Head devour a signature Tex-Mex dish, steak nachos. In the 1990s, the idea of paying for something using a phone seemed like something out of Star Trek. After accidentally stealing an iPhone, Beavis and Butt-Head use the Siri app to fill their cravings for delicious Mexican food with a seemingly unlimited budget at their disposal.

The film also lampoons the cynicism of modern Texas political campaigning. They are mistaken by Serena’s campaign team for “at risk” teenagers. Serena’s savvy campaign team thinks they can take advantage of these two in order to appeal to voters. Unfortunately, Beavis and Butt-Head aren’t exactly the wokest spokesmen if you’re trying to appeal to sympathetic voters looking to support the poor and needy.

That’s not the only experience that Beavis and Butt-Head have with what’s “woke” in 2022. They accidentally manage to stumble into a women’s seminar course in the middle of the fictional town of Highland. Although the university itself is not named, it's clearly modeled after more left-wing campuses like Southwestern University, Saint Edward's University or Rice University. Beavis and Butt-Head immediately create an uproar.

In one of the funniest moments in the film, Beavis and Butt-Head don’t recognize the issue when they’re confronted by a hilariously “passionate” male feminist, a mansplainer of social justice. If you’ve ever sat next to this type of guy in a college class, you’ll probably appreciate seeing Beavis and Butt-Head interact with an obnoxious dude who thinks he can speak for women. Thankfully, Beavis and Butt-Head get a little more insight from the women’s studies professor (played by comedian Tig Notaro).

Beavis and Butt-Head Do The Universe retains everything that made the original MTV series so brilliant. Judge never talks down to his audience and draws inspiration from his own experiences.

Judge also throws some subtle commentary about the state of the Texas prison system. Beavis and Butt-Head are arrested and sent to an overstuffed prison without a trial. They’re hardly the only harmless characters who are unjustly sitting in a jail cell. As they goof around (and Beavis brings back his “Cornholio” alter ego), they’re mistaken for activists and start a prison riot. Ironically, it's the inadvertent power of Beavis and Butt-Head that overwhelms the local corrupt cops.

Judge throws in many more local references that Texans might appreciate. Butt-Head tears up the San Antonio River Walk in a dream sequence; religious extremists mistake Beavis for an angel; the duo's home is taken over by a greedy banking system; and both boys make the mistake of trying to use a port-a-potty outside of a construction site. Hopefully, that’s not an experience that you can relate to. Even in the Beavis and Butt-Head universe, Interstate 35 is no closer to being completed.

Beavis and Butt-Head Do The Universe retains everything that made the original MTV series so brilliant. Judge never talks down to his audience and draws inspiration from his own experiences. Beavis and Butt-Head are morons, but sometimes it takes morons to save the universe. It’s fun to see them awakened in a darker reality but having no awareness of how things have changed.

There are certainly more modern developments that these two will have left to experience with Beavis and Butt-Head’s next season. They haven’t yet sampled social media, internet pornography, COVID-19, or President Donald Trump. Hopefully, Judge will throw in a few more Texan Easter eggs as he sets off on a new adventure.
KEEP THE DALLAS OBSERVER FREE... Since we started the Dallas Observer, it has been defined as the free, independent voice of Dallas, and we'd like to keep it that way. With local media under siege, it's more important than ever for us to rally support behind funding our local journalism. You can help by participating in our "I Support" program, allowing us to keep offering readers access to our incisive coverage of local news, food and culture with no paywalls.
Make a one-time donation today for as little as $1.