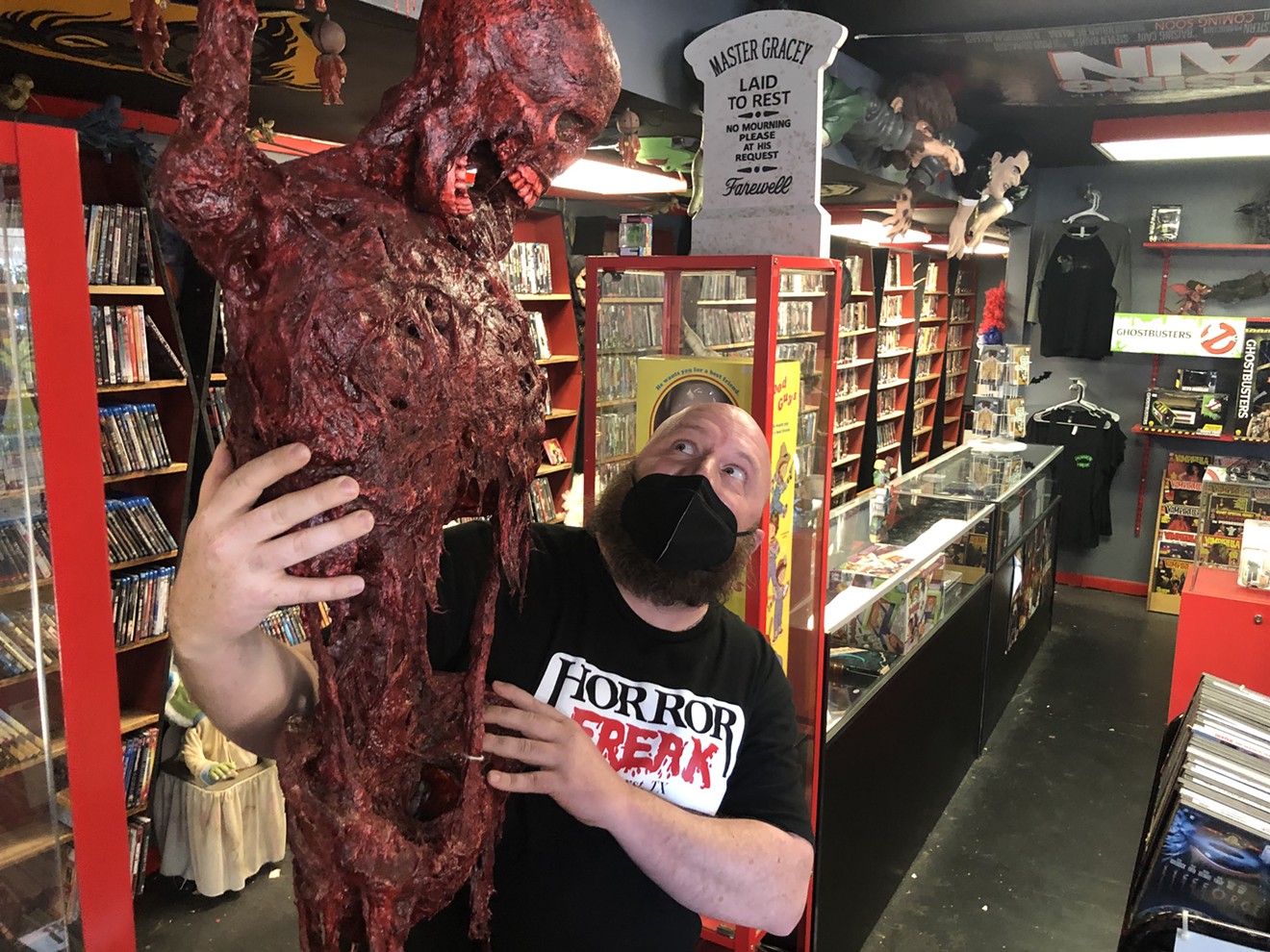 Eric Dallof, the owner of the Horror Freak collectible store in Bedford's Retro Plaza, has the first shop in DFW dedicated to grisly, gory and ghastly horror films and collectibles. Danny Gallagher
Eric Dallof has been selling the stuff he collects since he was a kid.

"I was 8 years old and I had a baseball card business," Dallof says. "My stepdad got business cards made and I went around my neighborhood and didn't know this but I put them in my neighbors' mailboxes and put the flag up because I thought that means you had mail."

Dallof spent most of his childhood helping out with his parents' chain of Thrift Town stores and selling the stuff he collected with his grandfather at swap meets in Fort Worth's Cattle Barn Flea Market.

"I was born into the junk business," he says with a laugh.

Dallof's childhood collection of horror memorabilia got so big that he still has an impressive collection of toys, magazines, movies and other weird collectibles. He's turned his scary collection into a thriving business called Horror Freak, a horror fan collectible shop in Bedford's Retro Plaza. The shop is thriving even during pandemic times of reduced foot traffic and tight budgets.

"Horror's a passion of mine," Dallof says. "That's my life."

It shows. The space (at 1424 Brown Trail) drips with horror through its black walls and floors, coffin-shaped movie shelves and grisly decorations hanging in the window and over the counter. A hearse sits out front and Dallof occasionally drives it around to attract attention to his place.

"I was like if I'm gonna do this, I gotta have one," he says. "I want the aesthetic to be all horror."

Dallof's dream of owning a horror store has been in the dark recesses of his mind for a long time. He worked as a mechanic for 12 years and all the while he told himself, "Once I paid off my house and truck, I'd do this full time."

In 2017, he took a chance on his store concept in a tiny space in Hurst not far from his current location. It was more "hidden" than his current spot, but he was planning on making a big move.

"I never looked back and never thought this wasn't gonna work," he says. "I knew this was part of it."

The next year, he saw a chance to move into an empty space in the popular Retro Plaza center of vintage toys, clothes and collectible shops. He built a dedicated following on social media by posting the most interesting things on sale: rare toys and collectibles, VHS and Laserdiscs of classic and cult horror movies — which he calls "dead media" — and even bizarre curios like preserved bat skulls and creepy specimens in jars. Dallof says he once had an authentic shrunken head in his collection. Horror Freak in Bedford offers customers a chance to own a bat specimen preserved behind glass.
Danny Gallagher
"I've always been into weird stuff," he says. 'I'm a big collector, period. I love antiques and anything that's weird, I have to have it."

Thanks to his social following and unique knack for promotion, Dallof's scaring up lots of regular customers. He sells store T-shirts drawn by local artists, and he says they sell out before he has a chance to issue new ones. Dallof says a woman from Missouri took a flight to his store just to get her hands on the newest shirt, drawn by Dallas tattoo artist Jamie "El Watch" English.

"I go through stuff so quick," he says. 'I don't hold on to product for very long. It's in and out."

Germaine McGowan, a frequent customer who stopped in the shop to pick up a shirt and a couple of movies to add to her collection, says she goes to the place three to four times a month with her daughter Kyla to see what Dallof has for them.

"When I walk in, I feel like family," she says. "There's no judgment here. We love it here."

The secret to Dallof's avid clientele lies in his seasonal sales. Halloween is actually his slowest time of year because of pop-up stores that only stay open during the spooky season. He also makes it clear that he's a horror fan, so you're not going to get a weird face from him when buying something grisly and dark.

"My Instagram really blew up quick because there aren't many horror stores," Dallof says. "There's a big horror community in DFW."

The Horror Freak store holds an impressive collection of creepy toys, art, masks and movies like Evil Dead II: Dead By Dawn starring Bruce Campbell.
Danny Gallagher
KEEP THE DALLAS OBSERVER FREE... Since we started the Dallas Observer, it has been defined as the free, independent voice of Dallas, and we'd like to keep it that way. With local media under siege, it's more important than ever for us to rally support behind funding our local journalism. You can help by participating in our "I Support" program, allowing us to keep offering readers access to our incisive coverage of local news, food and culture with no paywalls.
Make a one-time donation today for as little as $1.