The artwork outside of Deep Ellum's Yellow Rosa cost $2600. When it was vandalized, social media found the guilty parties. Maria Vilchez
Halloween marked Deep Ellum’s Yellow Rosa Cocktaileria’s two-year anniversary. But instead of celebrating, restaurateur Joel Roland, owner of Yellow Rosa, woke up to the news that his business had been vandalized.

At 2:30 a.m., two individuals can be seen on the restaurant's cameras approaching an art installation that's outside of the establishment. One of them can be seen tearing off half of the wooden heart that is central to the artwork.

“You can’t keep anything nice there [Deep Ellum],” Roland says. “They will tear up everything. It’s messed up.”

The artwork, valued at $2,600, is a collaboration between Roland and an underground tagger known as Guanamex. The piece is composed of a wooden white heart that is illuminated by a neon pink outline and topped with a halo.

“The way we painted it, it doesn't matter if it's day or night, it is still gonna glow,” Roland says. "The heart is a symbolic representation of peace, love and equality for all. It is a message to all who encounter it to love everyone. The strategic coloring illuminates the message so that it resonates beyond the restaurant."

Roland says the art was inspired by the tension in Deep Ellum resulting from crime.
click to enlarge 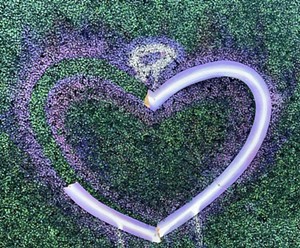 The art that was outside of Yellow Rosa was vandalized, but social media delivered.
Joel Roland


“Deep Ellum was going through a lot of transition where there had to be some order and we had to get the bad crowd out of there,” Roland says. “There was just a lot of tension. We wanted there to be some glimmer of love saying ‘Everyone should love each other’ and that's our main purpose for many of our decorations. … That neon heart busting out naturally and being able to be alive, we wanted that to be the focal point of Deep Ellum saying ‘Stop the violence.’”

Yellow Rosa has been vandalized more than once since its 2019 opening, but the business did not have cameras installed on the exterior during any prior incidents. This time, Roland and his staff took to social media to find the culprits.

“It is pointless to call [the police]; they're not going to do anything.” Roland says. “They're overwhelmed and overworked and I don't think they see this as a big deal compared to murders and stuff like that. But I knew how much I spent on that [art].”

The videos and still shots of the vandalism posted on social media, Roland says, were pleas for the public to aid Roland and his staff in holding the individuals accountable.

Within four hours, social media users had filled Yellow Rosa’s direct messages with the names, links to social media accounts and contact information of the individuals in the footage.
“I was grateful. I was surprised,” Roland says. “It almost brought me to tears. I was in awe at how much people also want Deep Ellum to be respected. Everyone is just fed up with this type of crap. People are just tired of this bullshit.”

Roland says he has been in contact with the vandals, who have apologized. But Roland is demanding accountability. The vandals agreed to turn themselves to Dallas police on Nov. 2 and there is an ongoing investigation.

Misa Miranda,  who is shown on video removing half of the heart on the wall, says she's been harassed over the incident.

“I made a regretful mistake and apologized,” Miranda says. “I understand my consequences, but that should never involve exposing a very young person all over the internet which resulted in constant harassment and threats from strangers … What I did was not OK either, but should never result in that type of harassment, exposure and attempt to essentially ruin my life. I was put in danger.”

A temporary seasonal art display is in the works to replace the defaced artwork. Roland and Guanamex are planning a permanent replacement that will premiere in the spring. The upcoming art piece will symbolize  love and individualism.

Despite the hurdles Roland has faced as a Deep Ellum business owner, he says crime in the neighborhood has been sensationalized.

“What I feel is that it seems like it's the only place where violence happens.” Roland says. “That's what annoys me — everyone thinks it's the only place in Dallas where things happened, like McKinney [Avenue] doesn't have anything, when there was recently a shooting.”

In September, Fox 4 News reported that a stray bullet hit a man during an Uptown shooting.

Yellow Rosa wants to continue to be a beacon of peace, love and equality that reflects the essence of the Deep Ellum community, and to overshadow misconceptions.

“We want to have a good time, like, life is hard enough,” Roland says. “The public has really loved us and the neighborhood, we love it. It's not as bad as everyone says it is.”
KEEP THE DALLAS OBSERVER FREE... Since we started the Dallas Observer, it has been defined as the free, independent voice of Dallas, and we'd like to keep it that way. With local media under siege, it's more important than ever for us to rally support behind funding our local journalism. You can help by participating in our "I Support" program, allowing us to keep offering readers access to our incisive coverage of local news, food and culture with no paywalls.
Make a one-time donation today for as little as $1.