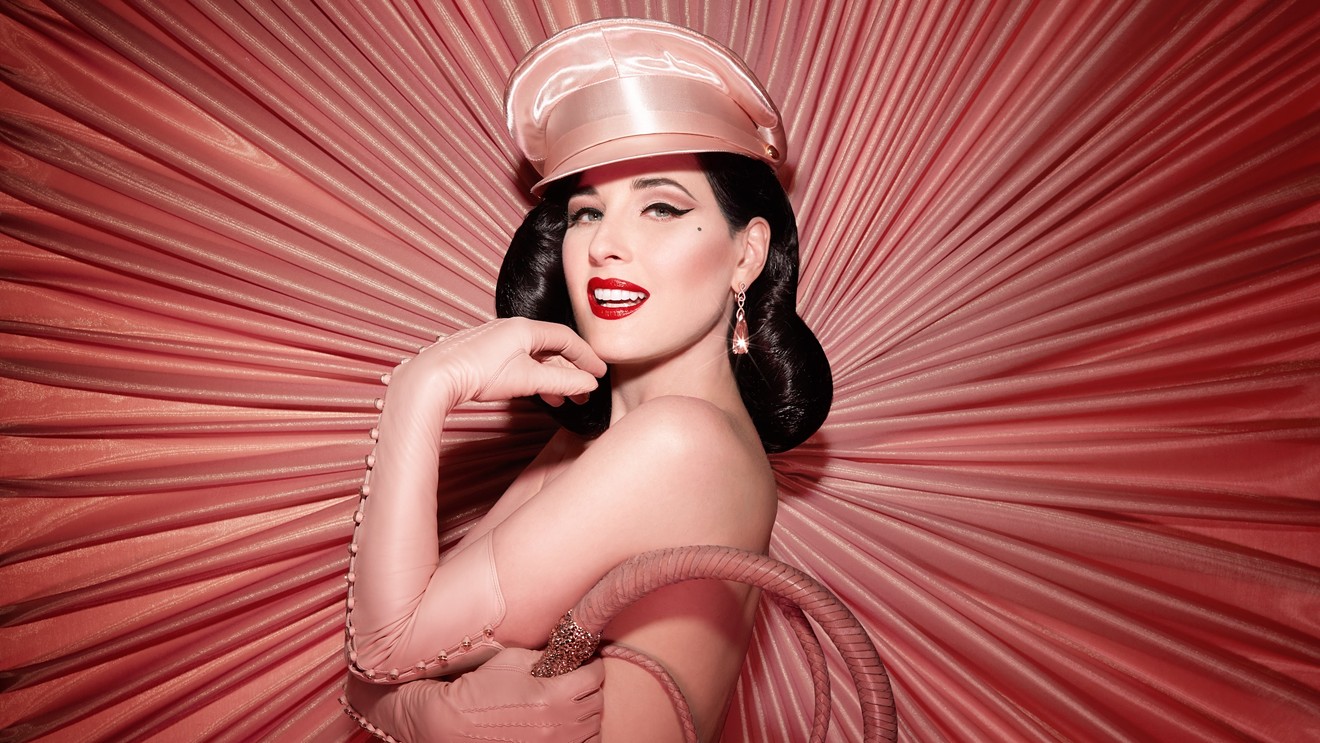 Dita Von Teese didn't invent burlesque, but she truly perfected it. Albert Sanchez
While describing her affinity for fetish shoes, Dita Von Teese accidentally sums up her entire body of work. “It’s really about the unusual, the exquisite," she says, "something that you just don’t see every day.”

Von Teese has, literally and figuratively, worn many hats over the course of her career: Actress, author and businesswoman are all fitting terms to describe the entertainer, but she’s most renowned as the “Queen of Burlesque” and “World’s Most Famous Fetish Supermodel.”

In particular, she is credited with reviving burlesque, a performance style first made popular in the early 20th century, most notably for its striptease elements. Von Teese has had a satin-gloved hand in many of burlesque's biggest pop culture moments, most recently performing her signature martini glass routine in Taylor Swift’s “Bejeweled” music video.

But the performer is quick to explain that when it comes to burlesque breaking into the mainstream, “I don’t think it’s really mainstream at all.”

While burlesque has been referenced many times in pop culture, Von Teese says the performances themselves are still viewed as taboo.

“I still think people are trying to equate burlesque with sex," she says. "It’s not this heavy adult show. The nudity is a little bit secondary. Sometimes people see the show and they say, ‘I didn’t even think about how it was striptease.’ It was just a fun, big, beautiful, flamboyant, extravagant show with beautiful costumes and props about fantasy and spectacle. It’s kind of hard to explain to people until they see it.”

Von Teese’s shows feature an equal number of men and women, but it’s the women’s costumes that get the most pushback in more conservative markets. At some theaters in the South, Von Teese says she was told the women’s costumes could have bike shorts or pants, but that anything that showed the crease between the buttocks and leg was too revealing. Male performers were not held to this standard of modesty.

To Von Teese, this scrutiny misses the point of the art form entirely.

“One of the things I love about burlesque is that it has always been inclusive and body-positive," she says. "And it isn’t striptease under the male gaze. Most of the people that go to the burlesque show are women or men who are the partners of the women who have decided to come.”

Von Teese toured her latest revue, Glamonatrix, in New Zealand and Australia before the pandemic, but when the lockdown hit and live performances came to a halt, she went to work imagining how she could come back with a bang.

The U.S. tour of Glamonatrix, on tap for the Majestic Theater in Dallas on Jan. 20, aims to deliver on the promise of inimitability.

“It is all new but there’s also reinventions of numbers like the martini glass," Von Teese says of the show. "I have a new glass that we designed and covered completely with Swarovski crystals. There’s a lot of things people know me for but totally reinvented in a new ‘strip-scape,’ as I like to say. A new aesthetic and a new energy. I’m just really excited to get back to it.”

This new energy comes in part from shaking off the unnecessary pressure put on Von Teese, both from herself and others.

“One thing that’s wonderful, even in the last three years, I feel a little bit liberated from the idea of absolute perfectionism,” she says.

Von Teese uses the Crazy Horse, a Paris cabaret where she's performed several times, as an example of perfectionism taken to extremes.

“There are people in the audience that work there, and their sole job is to watch for imperfections and try to fix it," she says. "Which means like, ‘Oh, that move makes that girl look like she has a little bit of cellulite. We have to change the lighting or we have to change the dance or the move ever so slightly. Or she has to retire.’

“I used to get caught up in all of that,” she continues. “That kind of striving for perfectionism.”
click to enlarge 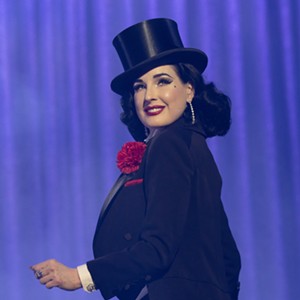 Von Teese, who turned 50 in late September, has also spent most of her career dealing with ageism.

“People tell you when you turn 30 that you’re getting old," she says. "It’s something I think, as women, we have instilled in us. I wish it would stop because you’re never going to be younger than you are right now.”

Female entertainers are often treated as though their viability has an expiration date, but Von Teese rejects the notion that her age should change how she’s able to express herself. She points to performers her age and older as proof.

"I think that’s the reason it’s important for me not to just say, ‘Oh, I have to stop because I’m 50.” No, I have to challenge the stereotype and ageism and move forward.’’

Von Teese further challenges shaming and taboos by putting fetishism front and center in her work.

“I think the one misconception [about fetishism] is the real definition of it," she says. "If you really look at the definition of what it is to have a fetish, it’s like you would replace sexual pleasure with that thing.”

While the word “fetish” is often used as a slang for simply liking something, the feeling goes much deeper than that, Von Teese says. She uses the work of longtime friend and collaborator, shoe couturier Christian Louboutin, as an example.

While Louboutin has created custom fantasy footwear for Von Teese’s shows for over 20 years, she believes the red-bottomed stilettos for which he's most known are just as fetishistic. For her, a luxury purchase such as a Louboutin heel is a perfect instance of an impractical pleasure purchase.

“I love living in a world … where a person who is a Louboutin client is like, ‘I’m going to buy that 6-inch heel,'" she says. "Then, the question is, where you’re going to wear it. ‘Oh, I’m going to wear it just in my bedroom. I’m just going to look at it.’ That’s a fetish, you know? To have something that isn’t practical at all but maybe you’re not going to do with that shoe what the normal person might be doing with that shoe. Could be just looking at it. Could be drinking Champagne out of it. Could be worshipping it.”

Fetishism has inspired Von Teese’s work since the start of her career. She has spoken and written extensively on the subject, including in her book, Fetish and the Art of the Teese.

“I’m not an expert, by the way,” she later clarifies after giving an illuminating explanation on the psychology of foot fetishes. “I just like talking to people about it.”

During the peak of her modeling career, fans would write to Von Teese about their own fetishes and request videos of her acting them out. She was happy to oblige and remembers many of these projects fondly: “They’d say things like, ‘OK, you’re taking ballet class with your friend. And you have to be wearing the pink tights and the pink shoes. And then one of you makes a mistake and puts a cream pie in the other one’s face.’ Yeah, I’m making that video. That’s hilarious.”

Von Teese’s burlesque shows have always had a humorous, tongue-in-cheek element. Laughter is another form of pleasure in her “strip-scapes.”

“If you ever talk to somebody about their most memorable sexual experience, it’s usually about something where you can let go and have fun and laugh," she says. "It’s not ever something you plan and everything is perfect. If you don’t have pleasure and fun and frivolity in your sex life, then I don’t know what you have.

“And that’s what this Glamonatrix show is about. It’s about taking fetishism and making it fun and frivolous and attainable and about fantasy. That’s what my whole idea was. I love bringing fetishism to the mainstream and portraying it in a way that doesn’t feel too dangerous. A way that makes you see it differently or change your mind about it.”

Though her aim is to encourage open-mindedness, Von Teese is more interested in leaning into taboos than doing away with them altogether. What would her work be without a little bit of scandal?

“I think ultimately, you don’t want to take away the taboo because, guess what? That takes the fun out of it," she says. "Rules are meant to be broken.”

As for that video with the ballerinas and the pies?

“I still have the video,” she says teasingly, true to form. “I’ll release it someday.”
KEEP THE DALLAS OBSERVER FREE... Since we started the Dallas Observer, it has been defined as the free, independent voice of Dallas, and we'd like to keep it that way. With local media under siege, it's more important than ever for us to rally support behind funding our local journalism. You can help by participating in our "I Support" program, allowing us to keep offering readers access to our incisive coverage of local news, food and culture with no paywalls.
Make a one-time donation today for as little as $1.