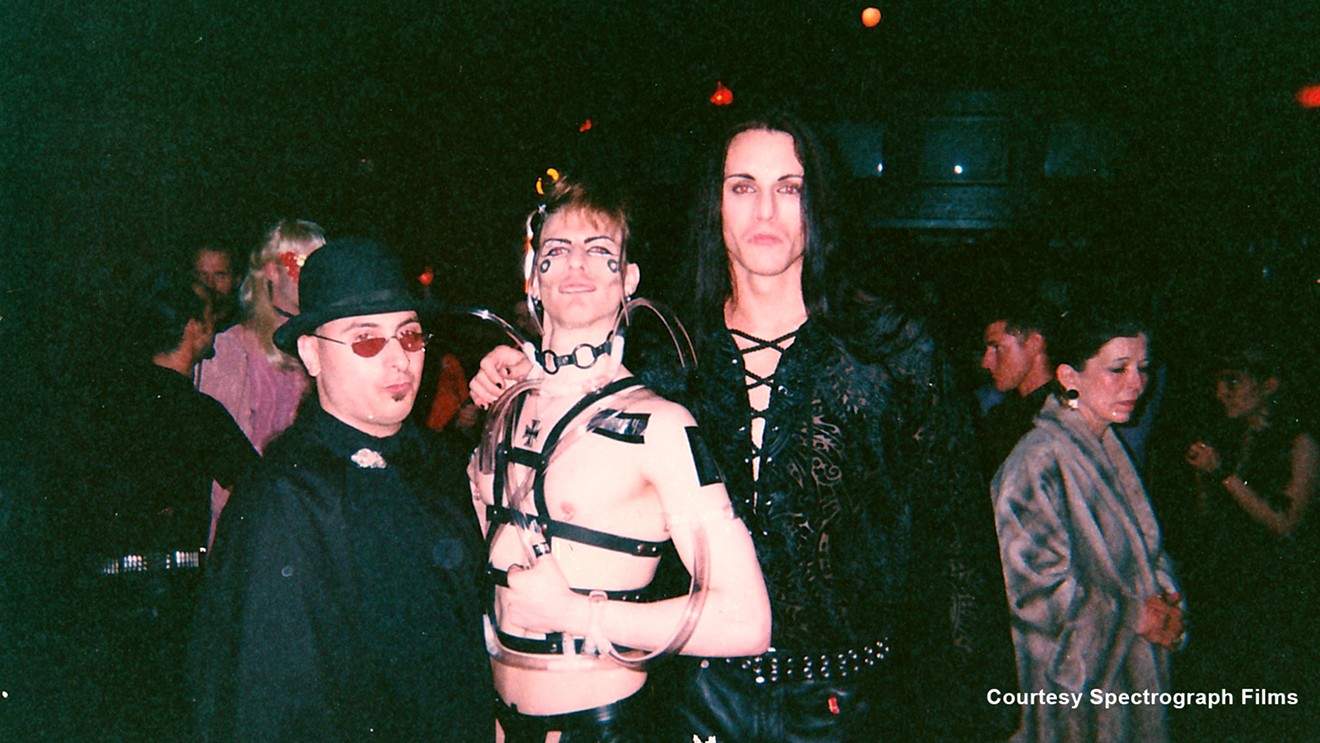 The Lizard Lounge and The Church shared a building on Swiss Avenue that became a melting pot for music and the "misfits" of the Dallas community. A new documentary called Dark Sanctuary is seeking funding to tell its story. courtesy of Spectrograph Films
Many businesses closed under the financial weight of the coronavirus pandemic, and one of the greatest losses in the Dallas music community was the closure of Lizard Lounge and The Church on Swiss Avenue.

The places didn't just give people a place to listen to and perform music or even catch a glimpse of a major celebrity like Madonna, Dennis Rodman or Deadmau5. They built something so special that people reacted to the closures as if it was sudden death of a best friend.

"When the announcement was made that the place was going to close and upon walking through those double doors for one final time, it felt like I was going through a portal," says film producer and regular patron Austin Hayes. "Going from that optimism to that hanging on that this isn't happening to stepping into the reality of this is it and feeling that gravity and weight of everyone's collective sadness, this place didn't just mean a lot to me. It meant a lot to so many people for so many years."

Hayes says he decided the place needed a documentary to explore more than just its history and the wild stories of its 28 years of parties for the goths and other "misfits" that allowed people to come as they are. It needed some documentation of its founder and owner Don Nedler, whose vision fueled it for so long, and how it helped its regulars and even its guests to find a form of acceptance in themselves and each other. So Hayes reached out to film director Timothy Stevens and the two started working on a documentary called Dark Sanctuary: The Story of the Church that's raising money for its production with an IndieGoGo campaign.

"There are people I've interviewed that can't really even like talk about it on camera because they get so emotional," Stevens says.

Nedler opened the EDM club and goth gathering spot in 1991 because he "knew this place was special," according to an interview he did with the Dallas Observer in 2020 shortly after its closing.

"It was everything you ever wanted — close to Deep Ellum, a chandelier, two parking lots," Nedler said. "It fit the criteria for a successful nightclub. I thought we’d have a good five-year run."

The holy aesthetic of the building gave its theme and name, which also plays into the documentary's title, Hayes says.

"I would say that we chose a very appropriate title with Dark Sanctuary because it felt like the Lizard Lounge was a sanctuary for so many people," Hayes says. "Not only could they go to escape but they could be. They could completely be who they want. The Lizard Lounge was an escape and an outlet to be you. You ran into all walks of life: fetishists, gay, straight, nonbinary, drag queens. Everyone was there and there was this collective understanding to respect one another, to enter without prejudice. I think that's what it meant to a lot of people; a place where they could go and not be judged."

Stevens says people needed a place where they could be themselves, especially in the judgmental and panic-fevered era of the late '70s and early '80s when needless fears arose, brewed by the "Satanic panic" from clergy and the media.

"Not to diminish anybody now, but I feel like it's easy to be goth now and be accepted," Stevens says. "In the early '80s and '90s, you could be arrested for wearing a trench coat. Misfits, outsiders and all creatives, until The Church came around, they didn't have any connection amongst each other."
click to enlarge 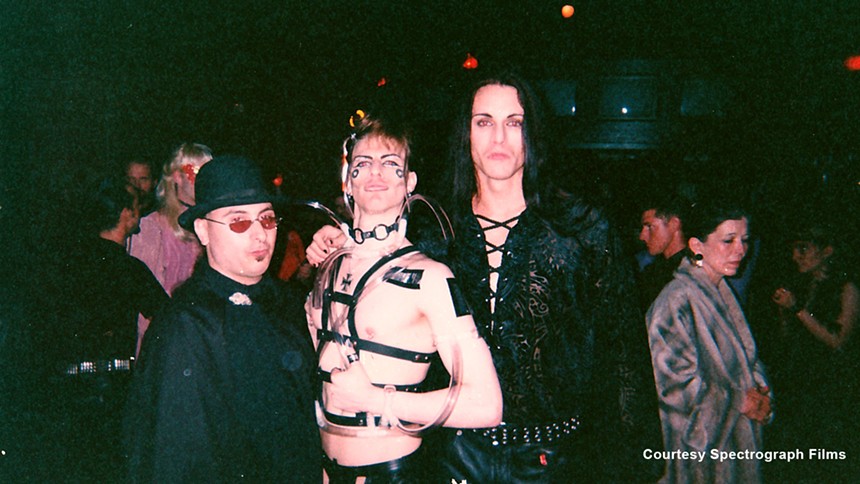 The Lizard Lounge and The Church shared a building on Swiss Avenue that became a melting pot for music and the "misfits" of the Dallas community. A new documentary called Dark Sanctuary is seeking funding to tell its story.
courtesy of Spectrograph Films

Nedler also saw the future of music in DJs, who Stevens says he called "the new rock stars." Stevens recalls a story Nedler told him about a trip he took to Miami to scout for new musical talent when he saw a club holding an industry music night called The Church that "was playing a little bit of retro but dark industrial music. All hard, very cutting edge music."

"He brought that back to Dallas," Stevens says. "I think he saw a burgeoning genre and community that didn't have a point of connection at all. He saw that environmental aesthetic was very important to the gothic community, or 'vibe' would be the word they used back then."

Nedler is also involved with the documentary as a producer, and Hayes says they spent a lot of hours talking to him and other regulars and fixtures who recall nights when Chuck Norris would walk in the door or the rumor that Joan Jett's video for "I Love Rock 'N Roll" was filmed in the famed Swiss Avenue building. There's even a legend that the place is haunted.

"Whenever I first interacted with Don, he did approach it like a business meeting, and I did feel like he kind of put this wall of steel between us and him," Hayes says. "He sensed how genuine we were and how driven we are about this. That wall was lowered, and he has very much warmed up to us. It's to the degree where he's approached us and asked, 'How's everything going?' and 'Do you need me to help?' My impression of him is when you gain his trust, that warmth he gives is very comforting."

Of course, the movie isn't just to honor Nedler's contribution to a community he helped build. It's also for the community that's still looking for the next place like Lizard Lounge or The Church that they can call their home once again.

"We're doing this movie for them, and we're also doing this movie for the people who didn't know about it," Hayes says. "I've never been to Studio 54 but man, that would've been the tits. I want this story to be told so they can be inspired. So the kid in small town Kansas, Nebraska or whatever, you name it, they can know there are others like them or others who want to express themselves and that there are outlets in this world where you can be you."
click to enlarge 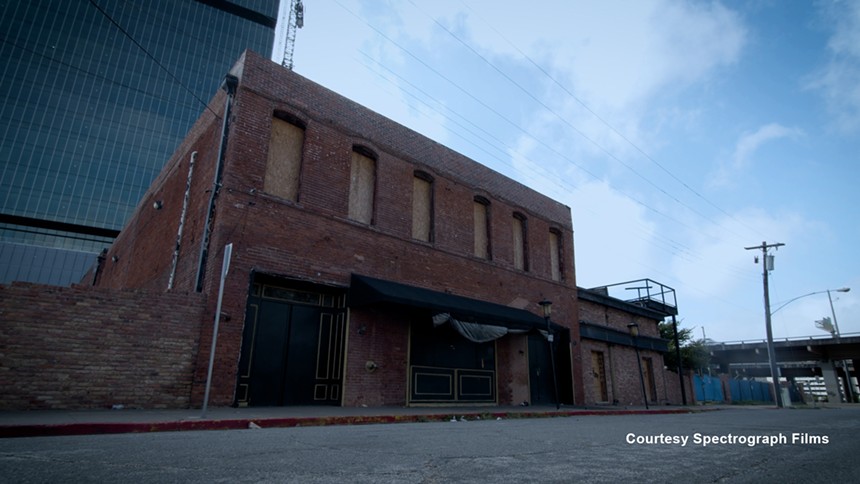 The vacant building on Swiss Avenue that once housed the Lizard Lounge and The Church is now owned by Westdale Asset Management, the real estate company that owns a lot of building in Deep Ellum.
courtesy of Spectrograph Films
KEEP THE DALLAS OBSERVER FREE... Since we started the Dallas Observer, it has been defined as the free, independent voice of Dallas, and we'd like to keep it that way. With local media under siege, it's more important than ever for us to rally support behind funding our local journalism. You can help by participating in our "I Support" program, allowing us to keep offering readers access to our incisive coverage of local news, food and culture with no paywalls.
Make a one-time donation today for as little as $1.