The Bond of Music: The Women’s Chorus of Dallas Provides a Community for LGBTQ Women 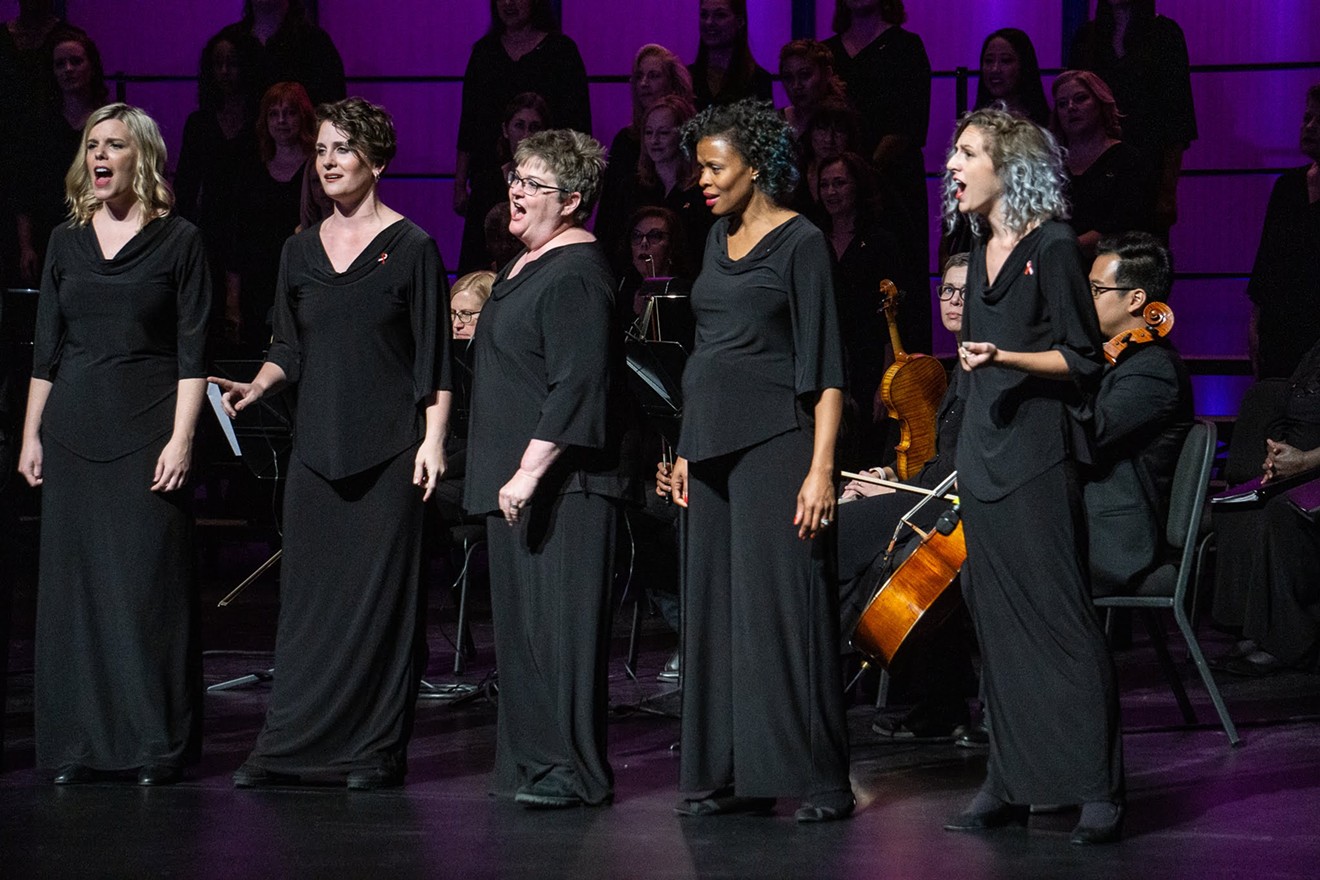 The Women's Chorus of Dallas on their 30th anniversary concert. Through the years, the choir has become an inclusive community for LGBTQ members. Nafisat Raji

In October, the Women’s Chorus of Dallas celebrated its 30th year of creating a community for its singers and bringing powerful music to its audiences. It started in 1989, 10 years after the inception of the Turtle Creek Chorale, Dallas’ gay men’s chorus. Right now, TWCD has around 100 members, who cover a diverse range of age, religion, ethnicity and sexuality. The chorus has a strong LGBT focus, which is represented both by its members and the events at which the chorus performs (such as the Black Tie Dinner) — but it is welcoming to all women. And all the women who partake are volunteers: TWCD is entirely a community chorus, which means a few things different things.

First, it really highlights the community aspect of a chorus. Any chorus is going have a group of people who all have to work together to produce a unified work; not every chorus is going to provide a family-like space for its singers. Especially in the last several years, the community of TWCD has blossomed. Some members have even found their significant others through the choir: Current artistic director Melinda Imthurn, who joined the chorus as a singer about 15 years ago, met her wife there. But strong friendships and near familial bonds also abound in the chorus.

“They’re all best friends — they do everything together,” Imthurn says.

The intimacy among the chorus members is apparent during performances. The group had its annual holiday concert, dubbed Chillin’, earlier in December. They performed songs that spanned the season’s emotional landscape, from the somber “Bleak Midwinter” to the witty and funny “Sing a Silly Song of the Season” from TWCD’s pianist Will Varner, to the cozy vibes of Ella Fitzgerald’s “Hotta Chocolatta.” Throughout it all, the singers exhibited clear signs of friendship and familiarity with one another, comfortably dancing and laughing their way through the funnier songs. Dress-up characters also have a place in the musical lineup: Frosty the Snowman and two Santa Clauses danced across the stage, adding holiday fervor and showing that the chorus doesn’t take itself too seriously. All of this contributes to the wonderful camaraderie of the chorus.

The chorus hasn’t always been so close — Imthurn recalls times when the members have been prone to forming cliques, or have been less supportive of diversity. That was the situation when she first arrived as a singer: Since becoming artistic director of TWCD, Imthurn has seen the atmosphere of the chorus shift into the diverse and supportive place it is now. That shift is having definite effects: The chorus has more members now than ever.


“We’re the Women’s Chorus of Dallas, so music should come first, and everything else should come second.” — Melinda Imthurn

That brings us to the second aspect of a community chorus. As volunteers, all the singers are there because they want to be, not because they have to be.

“I wouldn’t be doing this if it was just a job,” says Imthurn — and nor would any of the chorus’ members. All the singers truly enjoy being part of the chorus. If they didn’t, they just wouldn’t show up. This makes their music in some ways superior to that of a professional choir: While a professional choir will have technical perfection and skill, a community choir will have heart and passion.

And yet, musical excellence is paramount to TWCD. “We’re the Women’s Chorus of Dallas, so music should come first, and everything else should come second,” says Imthurn. Many community choruses prefer to focus solely on the community aspect: It is’t about the music, “It’s about singing together.” Indeed, some say this was TWCD’s focus in its early days. But under Imthurn’s direction, the chorus has turned its focus toward the music.

This, in turn, is probably part of what makes the community of singers so closely knit: They have to work hard together to improve musically as individuals and as a chorus. And TWCD is ready to help them improve. Trained as a voice coach and passionate about the human voice, Imthurn is eager to train the singers to the best of their abilities in rehearsals.

Of course, it also provides an opportunity for women who always wanted to be singers but never got the opportunity to sing professionally. Last season, they even got to sing at Carnegie Hall. But it isn’t all about professionalism. When trying to sum up their favorite moments of the last season, several members cited their experience at Carnegie Hall or singing alongside Hugh Jackman — but a lot also recalled the time the chorus sang at a nursing home, providing the wonder of music to people who rarely have the opportunity to see a live concert.

That’s the magical intimacy of TWCD: Whether you’re listening to one of their performances at Moody Performance Hall, or at Carnegie Hall, or at a nursing home, or on a CD at home, you’ll find yourself witness to a beautiful community of beautiful singers.
KEEP THE DALLAS OBSERVER FREE... Since we started the Dallas Observer, it has been defined as the free, independent voice of Dallas, and we'd like to keep it that way. With local media under siege, it's more important than ever for us to rally support behind funding our local journalism. You can help by participating in our "I Support" program, allowing us to keep offering readers access to our incisive coverage of local news, food and culture with no paywalls.
Make a one-time donation today for as little as $1.