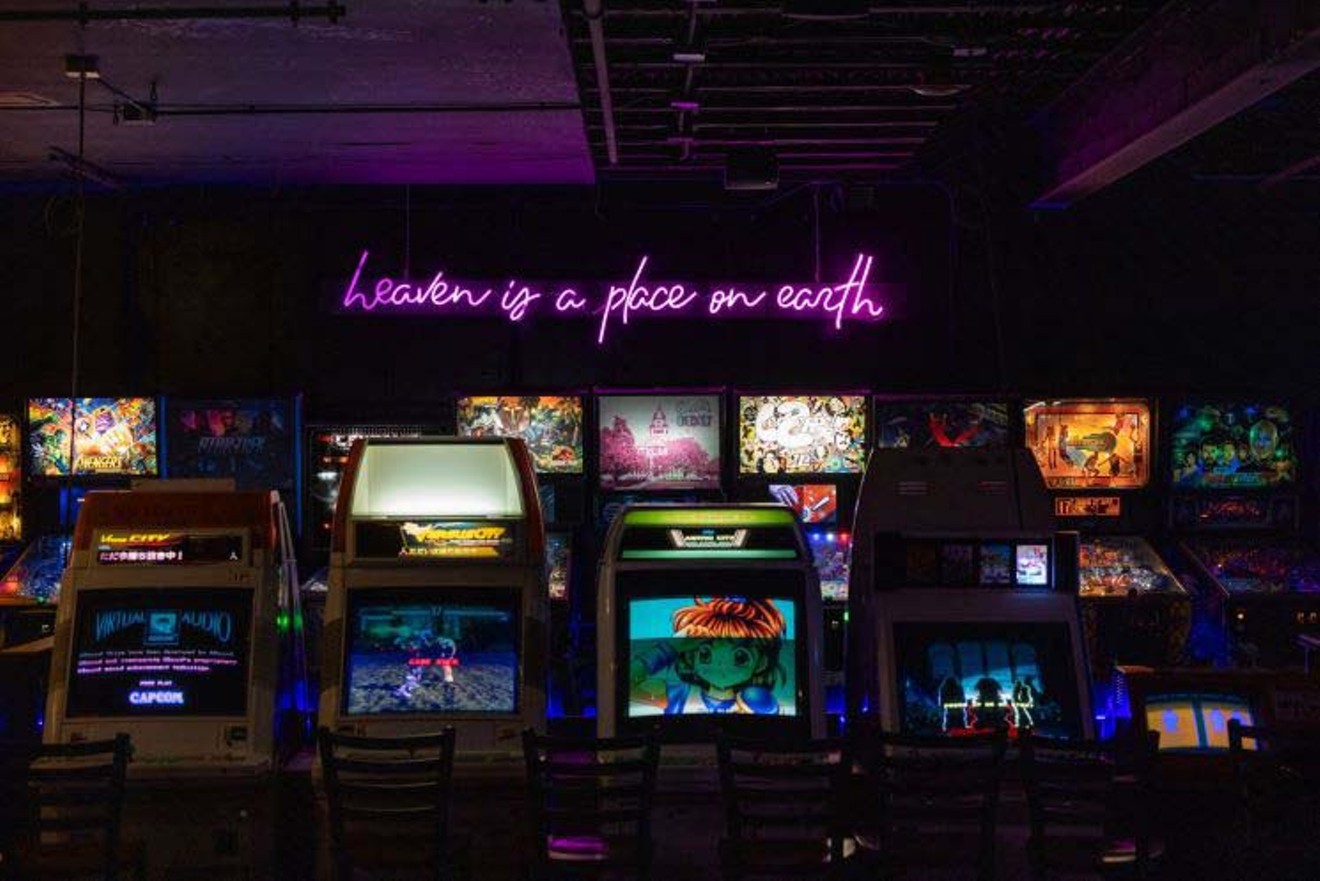 The arcade chain opened a fourth branch in a small space on West Hickory Street in 2018. Things got complicated when the pandemic forced them to close, which lead to a dispute with the landlord that brought the two parties to court in 2020 at the peak of the coronavirus pandemic.

"It was the hardest thing of my professional career," says Free Play Arcade owner Corey Hyden. "I think that's why we were so adamant on getting back to Denton."

After an undisclosed settlement and months of searching and renovating, Free Play Arcade is back in Denton in a place that's even better than anyone could have imagined even with a global virus that could gum up the works at a moment's notice.

This time, Free Play took on a much larger location on West Hickory Street right on Denton's downtown square, and it had a soft opening of its fourth and most ambitious Dallas-Fort Worth arcade concept in the old Abbey Inn building. 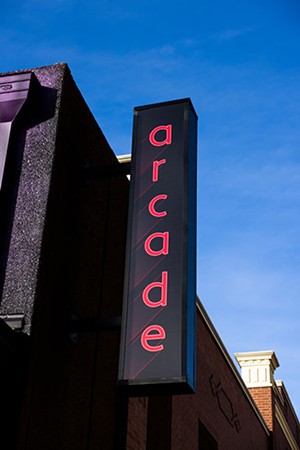 A classic style arcade sign is now part of the Denton square skyline thanks to Free Play Arcade.
Corey Hyden

"This building was sitting vacant, and we talked about leasing and couldn't figure out a good way to make it work to get all the square footage in a way that made sense," Hyden says. "So we said you know what? Let's just make a run at trying to buy it."

The massive space houses three floors of arcade games, a big kitchen and an expanded bar space that now allows them to sell cocktails.

"This used to be a big restaurant that served a ton of food," Hyden says. "So now we're able to turn out a ton of food at our Denton location. So we've basically broken every food record we've ever had."

The locale required an extensive amount of renovation to turn it into a useable space. The exterior needed work, but wasn't much of a problem compared with the interior. Hyden says almost every inch of wood had been rotted or gutted out by leaks or the elements.

"The stage had been rotten through," Hyden says. "There were probably whole ecosystems living in there."

Doing a renovation of a massive space during a pandemic presented even more challenges than those that already come with the opening of a a new business.

"Every time we'd try to tackle one task, it takes so much longer than it used to," Hyden says. "The place started to take shape, and we realized we were in a dream situation to be there on the Denton square. It's amazing. It's a really fun row to be on as an arcade. There's lots of really nerdy stuff there together with some Denton nightlife-type stuff.

"It seemed like it was gonna be a real addition to the square. It felt like we should've been there from the start and the pandemic took us there."

The bigger space allows for more games to be on the floor, but Hyden says they are focused on quality over quantity as they are with all their locations. He says Denton's arcade space can hold between 125 and 145 games, but they want to use the extra space to bring in larger games like Skee-Ball and basketball cabinets and provide more breathing room for larger arcade cabinets such as Killer Queen, a three-on-three, multi-goal platformer that's built a competitive gaming league across the Free Play chain and other arcade brands.

"It's so ridiculously big," says Free Play's community liaison Chris Delp. "I walk inside, and I see Killer Queen right there. Then you go downstairs and snake around the corner and another corner and the whole way is lined with games. It's crazy."

Local artists such as Jose "Skilz" May decorated Free Play Arcade's new Denton location with colorful game murals like this mashup of Dig-Dug and Q*Bert.
Corey Hyden
Delp says a big part of the company's success came from the Denton community, who waited patiently for Free Play to open an arcade closer to their home turf. He says he kept in touch with the local staff members who stayed on and made sure they were engaged in the interim with the dedicated patrons who packed their first Denton space.

"They've been kind of the nomads jumping from event to event," Delp says. "A lot of the successes I had post-pandemic has to do with the Denton players supporting my events and making the communities thrive in Fort Worth and Richardson. I owe those players a lot, so when I see that the Denton arcade is the best arcade, it makes me smile."
KEEP THE DALLAS OBSERVER FREE... Since we started the Dallas Observer, it has been defined as the free, independent voice of Dallas, and we'd like to keep it that way. With local media under siege, it's more important than ever for us to rally support behind funding our local journalism. You can help by participating in our "I Support" program, allowing us to keep offering readers access to our incisive coverage of local news, food and culture with no paywalls.
Make a one-time donation today for as little as $1.